“Mimic” sets the stage as the first senior show 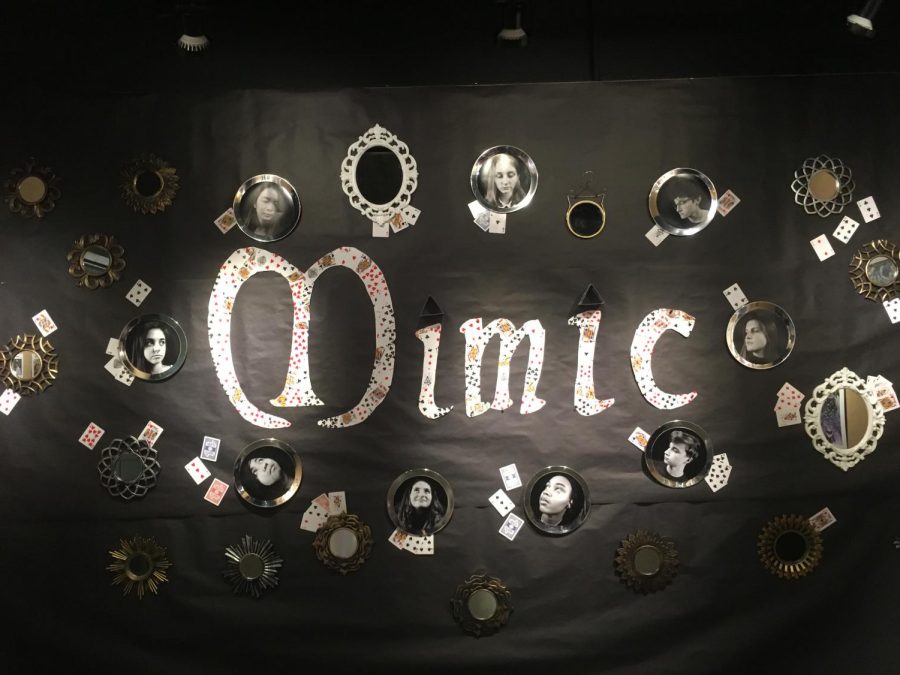 The decorated wall to represent the theme of the gallery, Mimic, which is based around "Alice in Wonderland." Photo by Adrienne Sato.

The first senior art show of the year, “Mimic,” opened this afternoon in the Norma E. Brown gallery from 2:45 to 5:30.

Each student displayed a number of the pieces that they had created over their years at Manual, and each had a notebook where family and friends could leave notes and messages.

The show opening was packed with students, teachers, administrators and family members of the artists. There were also refreshments in the hallway.

The show was almost completely set up by the nine students. They decided on the theme, the food and the decorations. They even picked music to play in the background.

They worked hard to get everything organized, and in the end, they were pretty happy with how it all came together.

“It was very stressful, but I was very proud about how it came out,” one of the featured artists, Zayne Isom (12, VA) said. “We stayed after school pretty much every day this week until like five o’clock just to get it ready.”

“I am happy that we had a big turnout and that we got everything organized and presented in time,” another senior artist, Carolyn Siegenthaler (12, VA) said.

The theme for the show, “Mimic,” was based around “Alice in Wonderland.” The wall directly to the left of the entrance is decorated with mirrors and playing cards. The word “Mimic” is spelled out with cut-up cards. Reflective plates with the seniors’ faces on them circle the word, and playful music from the “Alice in Wonderland” soundtrack plays in the background.

Senior artists said that the theme came from the idea of reflection.

“The title was Mimic because a lot of through the looking glass we thought of mirrors,” Grady Gartland (12, VA) said. “You mimic yourself in the mirror a lot, and that reflects back on who you are.”

“We combined a lot of different ideas,” Isom said. “We have the music playing in the background just to set the mood.”

The artists also expressed how strange it felt to finally finish their senior year art show after years of watching upperclassmen put on their shows.

“It’s kind of surreal because I remember going to senior shows freshman, sophomore, junior year and it was like ‘that’s gonna be me one day,’ and like- my art is in the gallery right now!” Isom said.

She also noted that putting up her show was a little nerve-wracking. “I was very nervous because– I don’t know– you’re letting your heart out,” Isom said. “But I was very excited because you’ve worked so hard all four years, and I feel like its nice to just let it out there and just like ‘this is what I did.’”

Siegenthaler said she didn’t realize how much work it would actually be to put together the show.

“Even last year I had senior friends, and I still didn’t know how much work and time this actually went into,” she said.

Gartland expressed hope for people to come see all the hard work the seniors put into the show.

“I hope you guys come see it, and just enjoy yourself!” he said.

The show will be on display in the Norma E. Brown Gallery until Dec. 2.