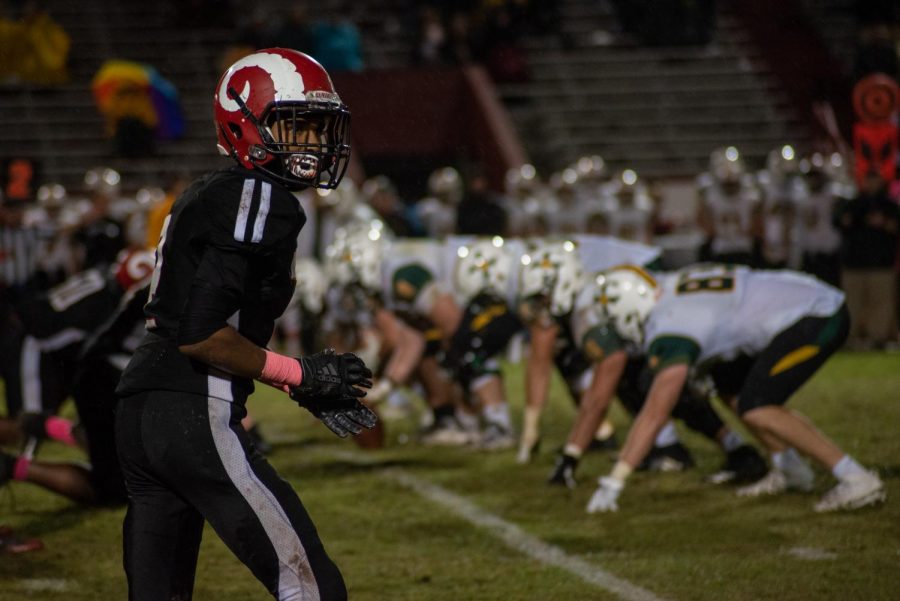 The St. Xavier Tigers defeated the Manual Crimons 28-9 in the second round of the KHSAA Class 6A playoffs ending the Crimsons’ season. The Crimsons made several errors allowing the Tigers to regain possession of the ball at a staggering pace throughout the game, especially with their special teams.

St. X defeats Manual 28-9 in round two of the KHSAA Class 6A playoffs, ending the Crimsons’ season. pic.twitter.com/GNlZinxOHJ

“Turning the ball over, snapping the ball over people’s heads — you can’t do that in playoff games and expect to win,” coach Scott Carmony said. After leading 3-0 in the first quarter with a field goal by kicker Patrick Holdener (#88, 11), Manual’s defense failed to stop two St. X touchdowns by Douglas Bodhaine which made the score 14-3 at halftime.

Bodhaine’s pass to Michael Duddy for 50 yards was the highlight of the night, all but solidifying the win for the Tigers. He passed for 132 yards and carried for 38.

“We got outplayed pretty much in every part,” Coach said. The Crimsons trailed St. X by two possessions until Manual’s JaWaun Northington (#22, 10) scored a touchdown early in the third quarter.  After a blocked PAT, the score was 21-9 going into the final quarter of the game.

“We lost focus on some things we wanted to do and made some mistakes,” quarterback Zachary Recktenwald (#17, 12) said. With seven minutes left in the fourth quarter, St. X’s Douglas Bodhaine scored the Tigers’ third and final touchdown of the game, which made the score 28-9.

Manual’s defense was strong in the second half of the game, preventing St. X from scoring several touchdowns at the goal line. On Manual’s possessions late in the fourth quarter, Manual’s passing game seemed to fall short and their special teams didn’t help the situation, usually giving the Tigers possession within field goal range.

“We didn’t deserve to win, so we didn’t win. That’s how this game goes,” Manual’s Sean Squires (#16, 12)  explained about the performance of the Crimsons throughout the game. This loss ends the Crimsons’ season for the year. “It’s always a learning process and it’s always a deal where you learn what it takes to win this time of the year,” Carmony said said.

“Even though it hurts right now, we’ve done a lot of stuff that people didn’t think we were gonna do,” Sean Squires said. “Winning district for the first time in thirty years, beating St. X for the first time in 26 [years]. So, a pretty great season.” Manual surprised many with the successful turnout of this year’s games, ending the season with a 9-3 record.

“I think we did a lot of things that people didn’t think we would do coming into the season — we shocked a lot of people,” Zachary Recktenwald said. “Unfortunately it didn’t end the way we wanted it to end.”