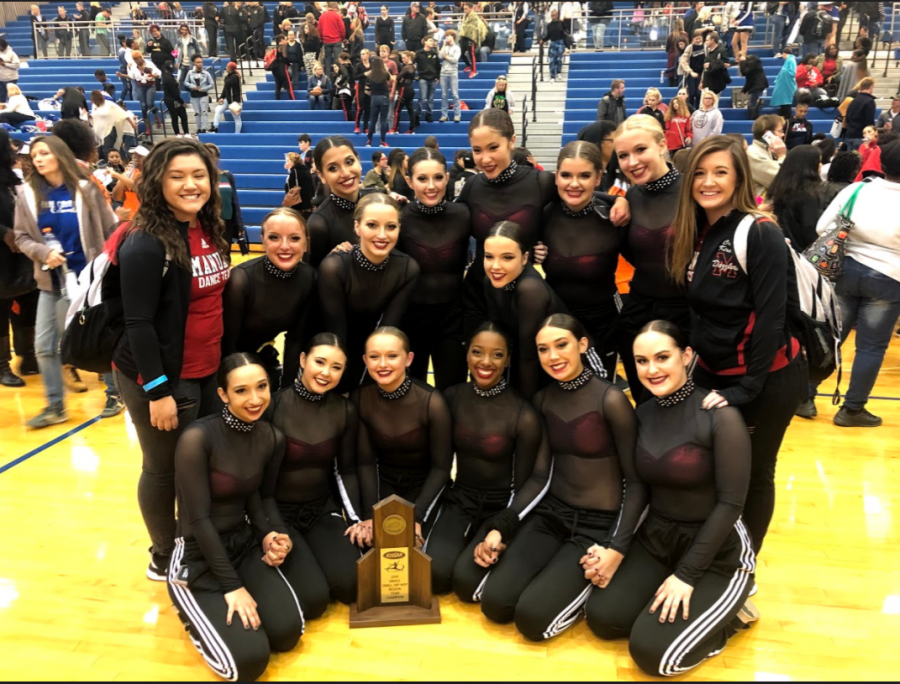 The Dazzler team sits together for a photo with the trophy. This trophy is for their win in the Small Hip Hop category. They placed in one out of two of their dances. Photo by Cassidy Adwell.

This piece was submitted by Cassidy Adwell (10, J&C)

On Saturday, Nov. 17, the Manual Dazzlers competed in regionals at Valley High School in the J.C. Cantrell gymnasium and placed first in hip hop with a score of 94, and third in jazz with a 91.

The Dazzlers competed in Small Jazz and Small Hip Hop. They competed in their regional competition with the hopes of qualifying for state on Dec. 21. Winning in jazz and placing third in hip hop means that the team has qualified for state for both routines.

The Dazzlers competed their Jazz routine first and everything went as planned leading to their first-place performance. The jazz routine is titled, “Breathe,” and instead of it having a more traditional dance where everyone follows one story line, the dancers each got to choose their own story.

“We have asked the girls to come up with some kind of story, whether it be, what they are struggling with, and then at the end of the routine, they can let it go, and they are finally able to breathe,” said Dazzlers head coach, Kristie Adanick.

Their second and final routine was their hip hop routine. Hip hop routines usually do not have a story, therefore, in their routine, they were all Ninjas.

With their expectations set high from their first competition, the girls were ready to win.

“Obviously our goal is to win, but for regionals, before state, we mainly use it as a prelim for state, so we just want to do the best that we can do and not worry about anyone else,” Lillie Napier (12, YPAS) said.

Most teams go into competitions with rivals that make then push harder, but the Dazzlers don’t have a rival. Therefore, they focus on bettering themselves rather than worrying about any other team.

With winning in jazz, and placing third in hip hop, the team has qualified for State which will be on Dec. 21 at Valley High School.