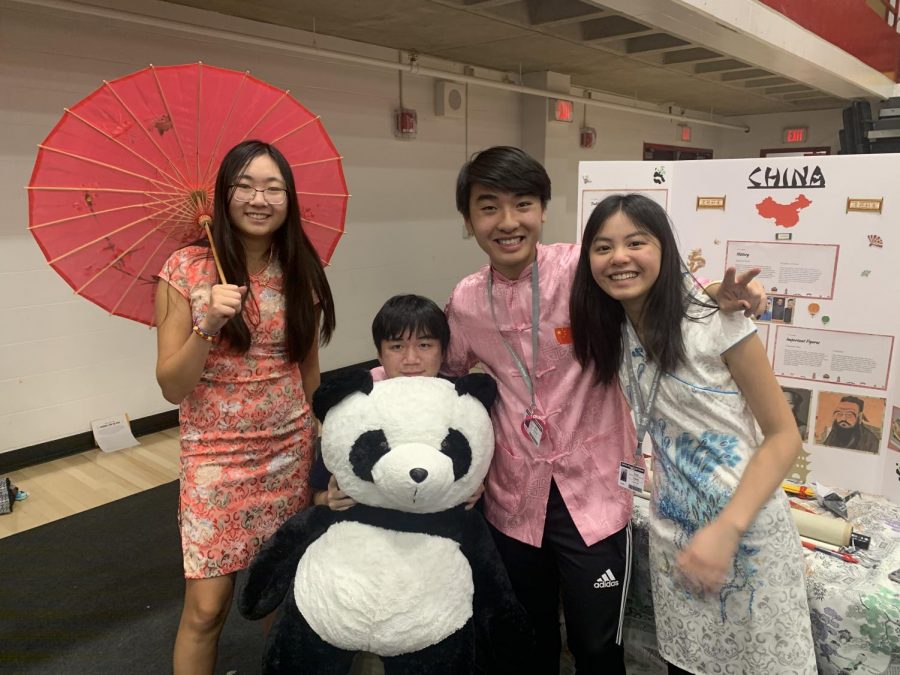 Students pose at the China booth at the multicultural fair. Photo by Macy Waddle

Manual’s second Multicultural took place yesterday afternoon. The administration rearranged the schedule in order to leave two hours at the end of the school day for the fair so that every student could attend.

The fair consisted of performances which took place in the auditorium, food from different cultures which was in the small gym and educational booths which were set up in the large gym.

Each grade level spent thirty minutes at both the food stations and the booths and an hour watching the performances. The grade levels rotated according to a schedule in order to avoid overcrowding.

The Multicultural Fair was a celebration of Manual’s diversity including various countries from across the globe. Students didn’t have to be from or have any connection to the country they wished to represent, but many students did choose to represent countries that they felt connected to in one way or another.

The fair was composed of student-based participation. In weeks leading up to the fair, students were able to complete a packet if they wished to participate. They had the choice to either perform on stage, create and serve a traditional cuisine or set up a booth.

During the fair in the auditorium, the performances opened with a drum line and then a brief flag parade down the aisles. Other acts included, but aren’t limited to, traditional dances of Bollywood and England, a piano piece from Norway and duPont Manual Ladies’ Chorus singing a song from the Philippines.

Lorry Mo (12, MST) did an old English dance for the fair. She enjoyed being part of the fair.

“This fair allows us to connect with each other, and being a part of it is really fun,” she said.

In the small gym, students walked around to sample different cuisines. Mini-plates or cups were spread out on the white tables with their respective flag nearby. Students staffed the tables, ladling out spaghetti or curry to other students and explaining the time they spent making these goods. The fair featured more than 40 different foods which ranged from from popular candies to traditional meat dishes or elaborate pastries.

The large gym featured a variety of booths which showcased different countries, clubs or organizations at Manual. The booths included a variety of poster boards, artwork and cultural items. Every student had a paper passport which they could get stamped at booths. If they filled up their whole passport, they could get a free snack at the end of the fair.

“I think it [the multicultural fair] is important because it allows people to learn about different cultures and learn about the best parts of those cultures they don’t necessarily have in their own culture,” Hannah Cease (10,MST) said. “I enjoy learning about all the different cultures. And of course the food, right? Who doesn’t enjoy that?”

Assistant principal Paula Boggs was the person who originally proposed the idea of a multicultural fair at Manual and was one of the main organizers of the fair this year. She stressed the importance of showcasing culture at Manual.

“It’s important to learn about each other so we can learn to respect one another and also embrace one another,” she said.  She developed the idea when she came to Manual and saw “all the diversity that we have here.”

“I think a lot of times we don’t realize the diversity that we have at our school,” she said.  “We kind of just hang with our friends. And we have our experiences based on our culture and our beliefs, and Manual is made up of so much diversity.”

One of the student leaders who helped organize the multicultural fair, Rojin Shirwan (12, MST), expressed a similar sentiment to Ms. Boggs.

“I wanted to have a place where people can feel it’s okay to dress up in their clothes and not be embarrassed,” she said. “I just think it’s really amazing how Manual is accepting and opening, but I also do think that for such a diverse school, we don’t have enough initiatives to display culture. So I think that this is a major step that way.”

The fair has expanded significantly from last year where the entire fair was in the large gym. Boggs mentioned that “the numbers tripled” from last year in terms of the amount of booths and performances that the fair showcased.

Boggs hopes to make this fair an annual event at Manual. She aims to improve the fair every year.

“We’re gonna have a group that is called the reflection group,” Boggs said. “Last year we were smaller and it was hotter in here. This year we got air conditioning and double if not triple the interest so we had to spread out… every year we reflect and we get better and better.”

In the end, both Ms. Boggs and Shirwan were happy with how the fair went.

“Seeing the kids just like hug one another and socialize and learn about each other’s culture and spend quality time together and celebrate, it was like pretty awesome,” Ms. Boggs said.

“It’s also rewarding knowing I was a major part of helping this happen for others,” Shirwan said. “It went a lot better than I thought.”

“I am so proud of our students,” Boggs said.