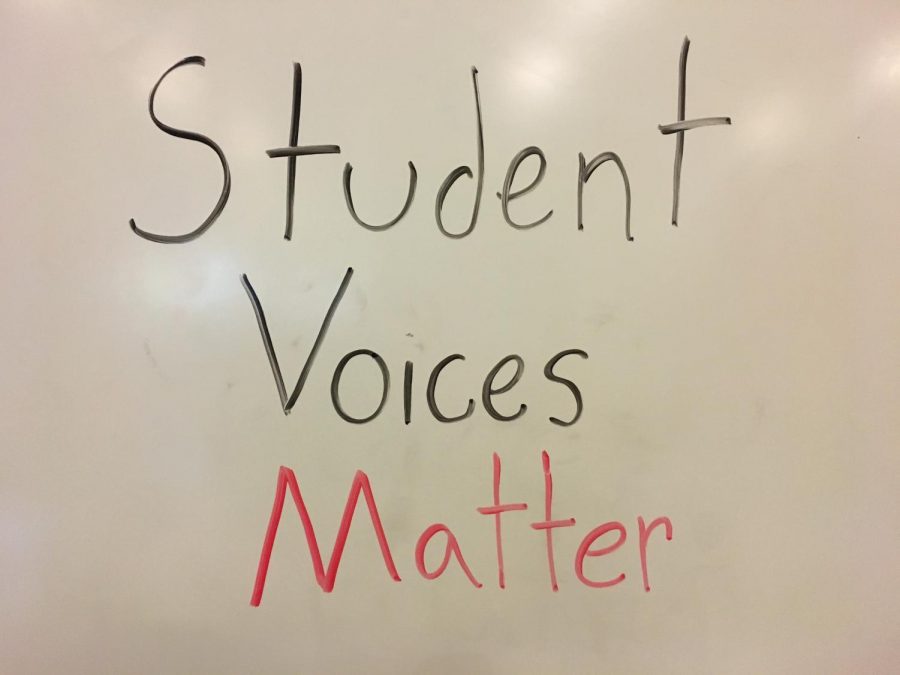 A student voice survey was posted on our website on Tuesday, Nov. 19 asking students how satisfied they were with the administration and whether they had any specific praise or constructive criticism. The administration survey included but was not limited to Principal Farmer, all four assistant principals, counselors and other staff members who students wanted to identify.

Manual students have a history of speaking up and advocating for change in their school.

On Nov. 14, 2017, Manual’s Black Student Union called for a school-wide sit-in. This was a peaceful protest of over 100 students advocating for the removal of former principal Gerald ‘Jerry’ Mayes.

Students were upset over Mayes’ conduct towards students of color and those of the LGBTIA+ community. In the leading offense, Mayes was secretly recorded during a conversation with two African-American students where he made unprofessional comments.

Casey Hoke (Alumni, ‘15) publicly posted a letter on Dear JCPS, writing that Mayes’ “patterns of private student meetings with constant probing and borderline harassment have continued for students I know in the Black Student Union (which he took credit for, but adamantly opposed its creation)  and for Manual’s Gay Straight Transgender Alliance’s gender-neutral restrooms that he had also previously strongly opposed.”

JCPS and a consulting firm conducted an eight-month investigation, resulting in the reassigning of Mayes to a non-instructional position within the district.

Kirk Lattimore became Manual’s interim principal for the meanwhile as a board of possible new principals was constructed. The SBDM meeting on Sept. 5 led to a unanimous vote in favor of Manual’s current Principal Darryl Farmer, who began on September 10, 2018.

Mr. Farmer has been Manual High School’s principal ever since.  Almost every single day, students can hear him ending the morning announcements with, “Have a Ramtastic day!” This unofficial catchphrase quickly spread among students and became a common source of comedy and community.

“I really like Mr. Farmer because he’s so involved and connected with the school, and he gets on the morning announcements every day. I just feel like he’s really a part of the school and I like his personality,” Christeen Florence (10, J&C) said.

A series of new implements have been made over the past few years under the school administration. Students have seen many changes such as the new Multicultural Fair created by Assistant Principal Paula Boggs, which has helped connect and positively foster the diversity at Manual.

The results of the survey can be found below:

42.9% of students who took the survey were satisfied with the current school administration.

57.1% of students who took the survey were satisfied with the current school administration, but feel there was a need for improvement.

0% of students who took the survey were not satisfied with the current school administration.

Students took the survey in a multitude of ways, even discussing the security guards.

“He (Mr. Palmer) is a really awesome person. He’s very interactive with the students. He will cheer you up if you’re having a bad day.” Evan Embery (11, HSU+YPAS) said.

A few students took the opportunity to submit both positive and negative feedback online about the school administration. Here are some of the things they had to say:

“I feel connected with the staff in a way I never have at another school.”
“Everything seems to be running Ramtastically!”
“The school seems to be functioning well overall, so that’s what matters, although it would’ve been a hard school to mess up. Mr. Farmer seems like a genuinely nice guy with a positive attitude. They should be more chill about students wanting to switch magnets, taking Spanish over the summer and with student activism.”
“The school administration is great for me, it’s the teachers that could use improvement.”
“Manual teachers seem to induce the toxic academic environment at times and support the unhealthy competitiveness which leads to students having more anxiety and creates a weaker trust relationship as well.”
“They are good at what they do but I don’t really feel connected to them at all. I don’t know who my counselor even is.”