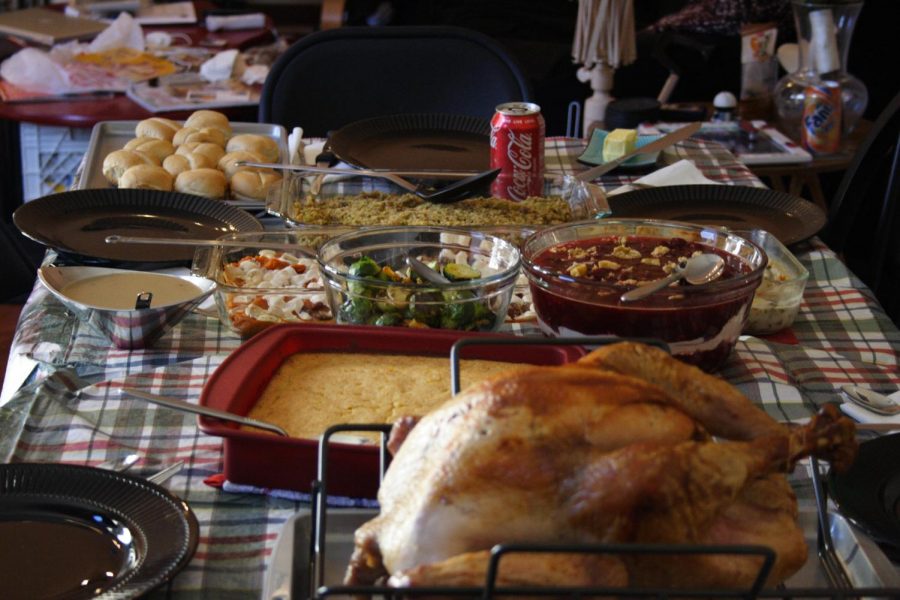 Thanksgiving is one of our favorite times of the year for a multitude of reasons. It’s the first socially acceptable time to start celebrating Christmas, family members start to come around a lot more and the family recipes get pulled out another year. Food though, is what makes Thanksgiving so unique to each person, especially to us on RedEye. Here are a few foods from across the staff that remind us of the holidays and what it means to us.
Main dishes
Turducken: Cesca Campisano, Photo Editor
“My parents get it every year instead of a turkey and I don’t eat it, I eat turkey legs.”

What is it?: Turducken, also known as a three bird roast, is a deboned chicken stuffed into a deboned duck that is stuffed into a deboned turkey. There is also a version of this dish in which the turkey is replaced with a goose.
Chana Masala: Mandala Gupta Verwiebe, Social Media Director
“It’s a vegetarian dish that we always have with my Indian side of the family. We make turkey and everything but we love chana masala so we always have it.”

What is it?: Chana masala originates from India. The dish uses ingredients like chickpea, onion, ginger, chili pepper, chana and more. It can be served on its own or with rice.

Side dishes
Sweet potato fries: Andrew Meiners, Social Media Director
“I have it every Thanksgiving and it reminds me of home!”

What are they?: Sweet potato fries are fries made with sweet potatoes and a variety of spices and seasonings.
Chicken and dumplings: Macy Waddle and Justin Farris, Staffers
“My grandma always spends a lot of time and effort making these and it’s everyone’s favorite part of thanksgiving.”

“They’re homemade by my grandma and absolutely amazing.”

What are they?: Chicken and dumplings can be made many ways, but the basis of this delicious dish is pieces of chicken, normally shredded chicken, and dumplings! They are in a thick broth and can sometimes be served with vegetables like carrots or celery.
Macaroni and tomatoes: Reece Gunther, Editor-in-Chief
“Not a lot of people have heard about it but the macaroni noodles mixed with tomatoes are very very good.”

What is it?: This is also up to interpretation, but the bottom line is that it’s macaroni noodles with tomatoes. Sometimes the dish may have mashed up tomatoes to act more like a sauce, or they may just be diced tomatoes.
Cheese grits: Adrienne Sato, Sports Editor
“My grandma makes grits every year at Christmas. She used to have a fake cheesy product that she used in it, but they discontinued it so the grits are not as good anymore. Last year, my mom and I made it instead of my grandma and it was kind of exciting.”

What is it?: Cheese grits, although normally a breakfast food, is a southern dish made from ground corn, also known as hominy grits. The grits are cooked with and topped with cheese to make it different from normal grits.
Pea and asparagus casserole: Norah Wulkopf, Staffer
“My mom only makes it once a year at Thanksgiving, so it’s really special when we have it. When I had surgery a few years ago my Aunt Pat made it for me because I wanted it so bad. It’s a comfort food.”

What is it?: While this can be made many different ways and each person can put their own spin on this dish, many recipes share common traits. Some common ingredients include peas, asparagus, cracker crumbles, cheese and cream of mushroom soup.
Deviled eggs: Kate Benton, Graphic Designer
“Three of us have this same food every year even though it’s not really a Thanksgiving food.”

What are they?: Deviled eggs, also known as stuffed eggs or Russian eggs, are hard boiled eggs cut in half and topped with a mixture made from yolk, mayonnaise and mustard.
Five cup salad (ambrosia): Molly Gregory, Staffer
“I was a picky eater as a child and this was the only thing I’d eat because it’s basically marshmallows.”

What is it?: Five cup salad, also known as ambrosia, is a mixture of fruits and marshmallows to create a sweet treat. It includes sweet fruits like oranges and pineapples and mixes them with shredded coconut and marshmallows. Some recipes may also include cherries.
Desserts
Lemon cake: Isabella Bonilla, Staffer
“I’m not even sure when this started, but my Grandfather brings it every single year, no matter what. Imagine a 6’2 man wearing an army hat and carrying a Walmart bag, boasting ‘I brought lemon cake!” It always makes him so happy, and he’s not one to express much emotion, so that’s saying something. I have a sneaking suspicion it’s because my mother adores lemon flavored sweets and despises pumpkin. It’s totally out of place on the table, but it’s never out of place in our hearts.”

What is it?: It’s pretty much how it sounds! It’s cake that uses lemon to make it savory and potentially a little tangy. It is often served with a light icing-glaze or decked out in full icing.
Pumpkin cheesecake pie: Ofelia Mattingly, Staffer
“It is a dessert that I make for the family that everybody enjoys. It is the only unique thing my family makes, it isn’t cheesecake or pumpkin pie, it’s both!”

What is it?: While there are a variety of recipes and ways to make pumpkin cheesecake pie, the majority of recipes will have you end up with a filling with the texture of cheesecake mixed with pumpkin inside a more traditional pie crust. It’s very personal though and you can make it your own!
Heidelberg Haus cake: EP Presnell, Opinion Editor
“We called it the German bakery growing up, but this bakery means a lot to my family. My parents’ wedding cake came from here and we had it at every family gathering growing up. It’s one of the things I miss most about Indiana but we still find a way to get it to most holiday gatherings.”

What is it?: This bakery has a bunch of different cakes and they have so many different elements. My favorites are with both vanilla and chocolate cake, vanilla icing, roses on top, raspberry filling in the middle and sprinkles on the side.

From our staff and families to yours, happy holidays!

“Thanksgiving Dinner” by Klimt on Flickr is licensed under Creative Commons Attribution 2.0 Generic. No changes were made to the image. Use of this photo does not indicate photographer endorsement of this article.