The decline in numbers: Girls’ basketball at Manual 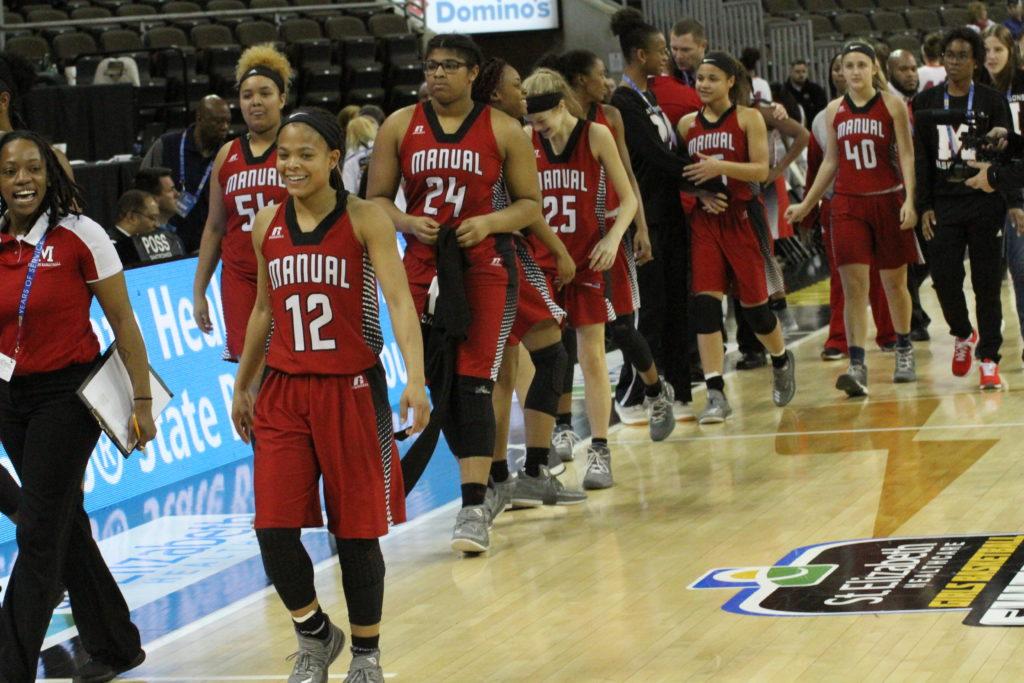 The Crimsons go through the post-game handshake line after defeating Scott County in the KHSAA Sweet 16. Photo by Richard Bowling.

In 2007, the duPont Manual Lady Crimsons basketball team had a strong program, with approximately 35-45 girls at all three levels and even made a trip to the KHSAA state tournament.

11 years later in 2018, the Lady Crimsons made the same trip to Lexington, but this time with only 18 girls in the entire program including JV players. They no longer had enough to have a freshman team as they did in 2007.

2018 wasn’t the only year numbers were down. In 2016 the Lady Crimsons took just 14 girls to state, and this past season the team made it to the region seven finals with only 15 girls in the program, many of whom were injured.

So in the past 15 years, what’s changed? Why are fewer girls interested in basketball despite their success?

LaKesha Perry played at Manual from 2004-2007 and is now the JV head coach and assistant varsity coach, so she has experienced the program in both ways.

“I think there are less girls at Manual due to the overall interest in basketball going down and the fact that kids schedules are so much busier,” Perry said. “With the demand of school, multiple sports and other extracurricular activities, it has really proven to be a challenge to manage them for parents and student athletes alike.”

This has proven to be true, not only through the numbers but from students themselves.

Students who participate in activities programs have higher self-esteem. They’re free to explore their interests and discover where their talents lie. Just one more reason to urge your teens to participate in high school sports and activities. #MyReasonWhy https://t.co/IC9D0ckqwm

Breanna Sanders (10,HSU) has played basketball since she was six but stopped playing when she started her freshman year at Manual, fearing she would be unable to balance her school work along with sports.

“I have ADHD, and I take sports more seriously. I don’t do school work because I’m into sports, so I knew that my grades would be bad [if I played basketball],” Sanders said. She also noted that only about three girls from her entire middle school basketball team continued to play in high school.

Another possible reason girls basketball numbers are down is specialization in one sport according to Jason Frakes, the high school sports reporter for the Courier Journal. Frakes has noticed throughout his 13 years at his position that more athletes, especially female, are focusing on a single sport year around instead of trying multiple sports.

“Maybe 10 or 15 years ago you might’ve had an athlete who played volleyball in the fall, played basketball in the winter and softball or track in the spring,” Frakes said. “I think now for various reasons, more and more athletes are focusing on one sport year round.”

Frakes, among many others, argue that specialization in sports is not beneficial for a number of reasons. To learn more about this topic, click here.

There are also more opportunities than ever before for high school girls, with newer sports like lacrosse and wrestling on the rise. According to MaxPreps, Manual girls’ lacrosse has had a team at all three levels since 2014. Last year, they even had two freshman teams.

“Hypothetically, that’s at least 15 girls on three levels, which is at least 30 girls who could have been playing basketball or some other sport, but are now focusing on lacrosse,” Frakes explained.

On Thursday, the basketball team will travel to Meade County to play at 6.