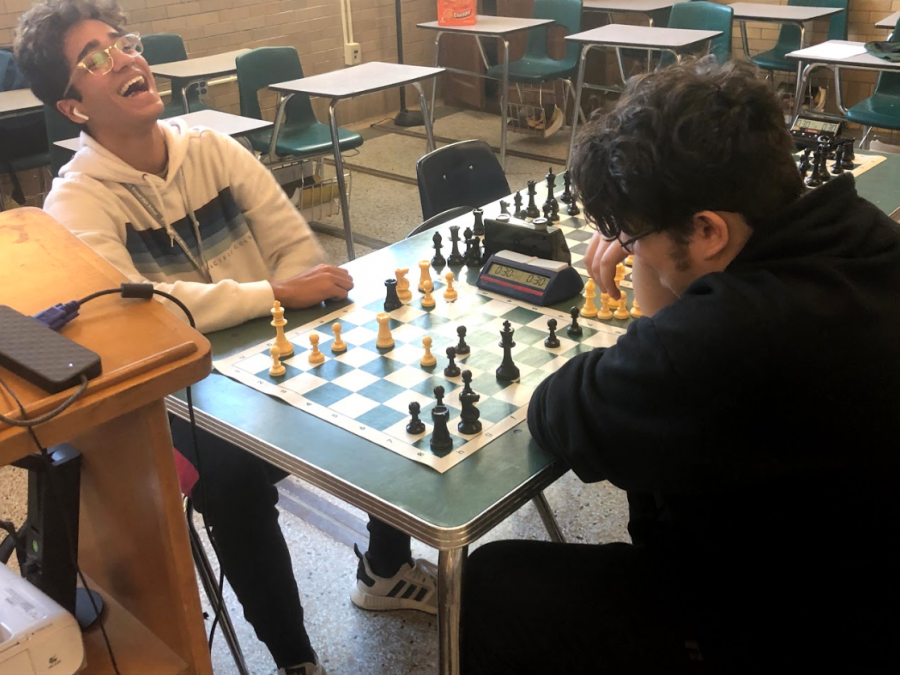 This story was submitted by Samuel Watkins (10, J&C)

The chess team defeated Male on Thursday 5-0, winning the game on all boards.

Male did not have enough players available for the five matches required in a regular season game, and thus forfeited on two boards, giving Manual an early two to zero lead.

Iman Dashti (10, MST) picked up Manual’s third victory on board two, earning a decisive early checkmate with his queen and rook on the seventh rank, which is the seventh row on the board.

This brought the team up to the amount required to win the match versus Male as a whole (3-0), but the other two games being played would still continue.

Alexander Sajik (10, MST) then secured the fourth point on board three in 21 moves, after taking his opponent’s rook and queen.

“My opponent left near the end of the game — she had to go, so she resigned, but I think the game was going well in my favor,” Sajik said.

The most competitive and intense game occurred on board one, where each team’s top performing player competed.

Ian Stearns (10, HSU) faced off against a senior from Male in an attempt to secure a unanimous Manual victory on the final board.

In the match, Stearns was able to slowly constrict his opponent from a defensive opening position and force multiple disadvantageous trades with the enemy using his supported pawns.

The final nail in the coffin for Forden was a surprise capture of his rook in the corner, leaving his back rank weak enough for a subsequent checkmate.

“The game was pretty fun. It was pretty long, and longer games are better, so it was interesting. There were a lot of tactics that were seen. It was mainly whoever calculated deeper into the game that won,” Stearns said.

While it’s always fun to defeat our rivals in another extracurricular, the chess team is more concerned with looking deeper into the game.

“I don’t really try to think about the teams in particular; I just try to focus on the individual that I’m playing,” Stearns said.

In addition, just as the team works to predict the future on the board, they’re also planning for their future growth and accomplishments.

“If we win half of our matches, we can go to Quad B, and if we do well at Quad B, we will qualify for the state team,” Sajik said. Quad B is one of Kentucky’s four state qualifying tournaments, encompassing Jefferson, Bullitt and Shelby County, as well as the surrounding areas.

“We lost a lot of our good players with the seniors graduating, so there’s a lot of new freshmen coming, so they’re learning a lot, they’re playing regularly, and I think we have a lot of opportunities to get better,” Stearns said.

The chess team continues its run through the regular season in high spirits, with glowing reviews for the team amongst its members.

“I just love Chess Club so much, because you never know what you’re going to get when you play against people from other schools. We had a school, I don’t even remember where it was, but my opponent comes in a full-body Spider Man suit,” Dashti said.

“Mask and all,” chimed in Michael Crain (English), the sponsor for Manual’s chess team. “I asked him to take his mask off. ‘Can you take your mask off while you play?’”

“From that point forward, I knew I would suffer the largest defeat of my career,” Dashti said. A soft chuckle spread around the room upon the realization that Iman had indeed dropped that game.

“Maybe it was the fact that I was literally in the presence of Peter Parker himself,” Dashti said.

Both the chess club and team remain open for all students as the season progresses.

“People come by and play chess. We have all kinds of people who come by and play chess with the chess club. The chess team is a little different, but even the chess team is typically composed of all kinds of kids — athletes, artists or even the head of the Key Club,” Crain said. “It’s open to everybody. It’s not a high pressure thing, and you don’t have to want to be on the team to come by and hang out with us. It’s an open-door policy.”