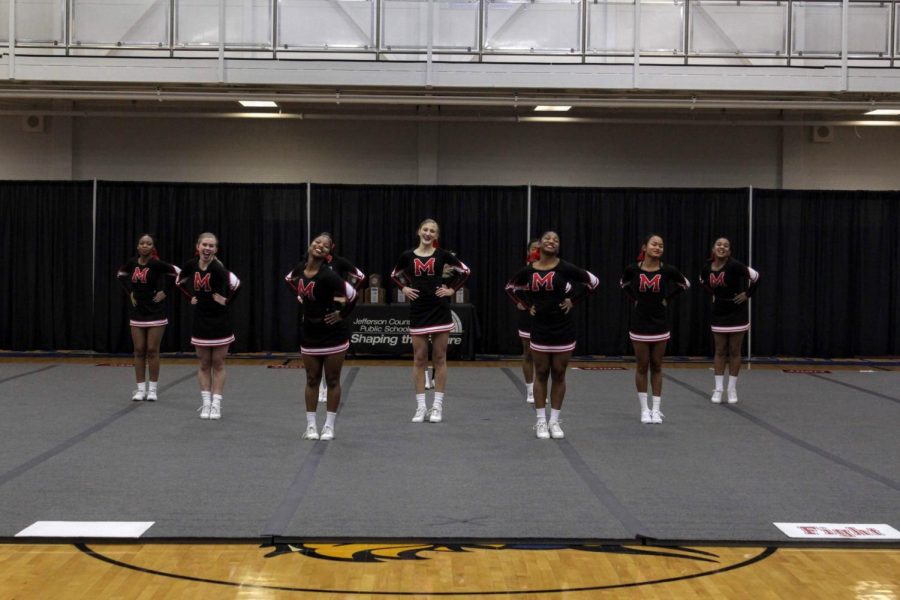 The team smiles for the judges, hitting a clean motion.

This piece was submitted by Ellie Thornsbury (10, J&C)

Performing after all of the other teams, Manual took the mat at 12:45 p.m. They hit all of their stunts and tumbling passes except for the pyramid. A pyramid is typically the last part of the routine, where all of the cheerleaders complete one connected stunt.

In the beginning of the pyramid sequence, the team attempted to do a flip, where the flyer from one stunt group flips the flyer from another stunt group. When Manual’s flyer flipped she slipped through the bases’ hands, hitting the ground. She suffered no injuries.

“It felt terrible. We have done that stunt successfully so many times so it’s really disappointing that we weren’t able to execute it the way I know we can when it really mattered,” flyer Abby Sanders (10, HSU) said.

The stunt drop led to a four point deduction. This was the only deduction they received.

Manual scored fifth out of sixth in the small division. All teams are split into divisions based on size.

“I’m definitely bummed about our fall at the end, but I would sit and watch them do exactly what they did today everyday!” head coach Candace Crawford said.

The main stunt sequence went without a hitch, both stunt groups completing their high-scoring moves with perfection.

The tumbling was also on point, including multiple standing tucks and running tumbling.

The girls compete next in January, which will also take place at Valley High School.

“I’m excited because it will be another chance to perform and be able to correct the mistakes we made this time,” Sanders said.

“I feel so much pride. They worked hard to get to this point and I could not have asked for more,” Crawford said.