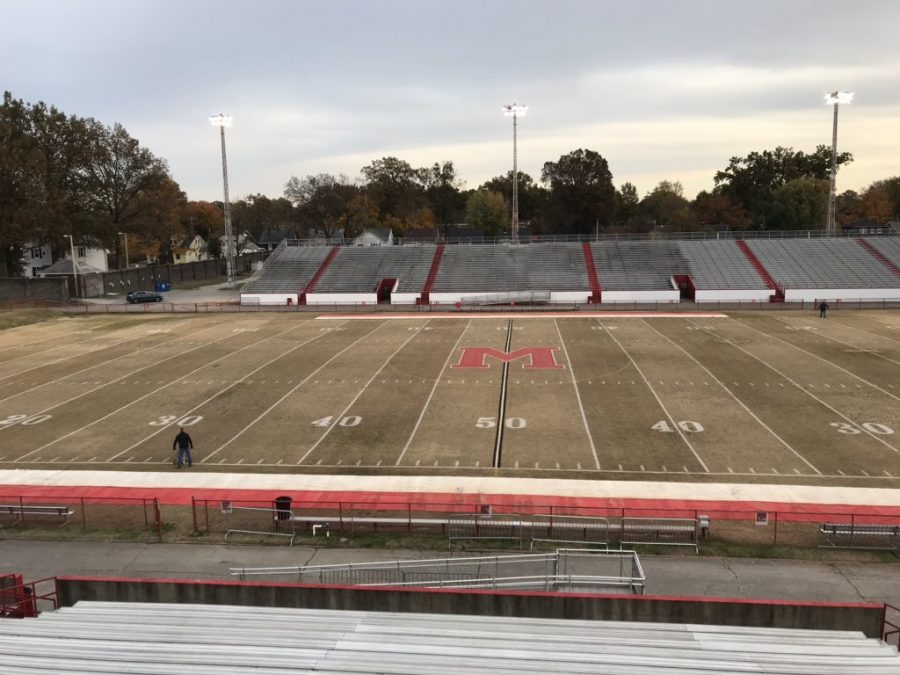 Manual's field before a football game at Manual Stadium earlier this year. Photo courtesy of @ManualAthletics on Twitter.

JCPS Superintendent, Marty Polio, announced in October that the district was in “preliminary talks” about providing artificial grass fields to every high school football team in JCPS. While there are a lot of convincing arguments for turf fields, the risks and costs of turf certainly outweigh the benefits, making artificial turf fields a bad fix for an ongoing problem.

What is artificial turf?

If you are unfamiliar with the playing surface, turf is a type of artificial grass which  imitates traditional grass fields but is made of small plastic blades of grass that are held in place with millions of pebble-sized, black rubber beads that serve as “dirt.” These beads come from recycled tires and are referred to as “crumb rubber.”

Turf, because it is made of crumb rubber rather than dirt, can withstand activity even when wet. This would theoretically allow teams to practice on their actual game fields without risk of tearing up the grass. Turf fields are common in field sports like football, soccer, lacrosse, field hockey and baseball.

While these benefits may seem alluring, turf also has downfalls. Below, we’ll take a look at some of the reasons why artificial turf is not worth the costs in JCPS.
Turf is more expensive than natural grass
Proponents of turf would tell you that turf costs more up front but will save money later on.

However, this may not actually be the case. Obviously every field is different, but according to the Safe Healthy Playing Fields Coalition, turf installation and maintenance is actually more expensive than natural grass.

Fieldturf.com reports that the total installation fee for an 80,000 square foot artificial field is $700,000. This factors in base preparation and actual installation. They also report $50,000 for maintenance over 10 years, meaning $750,000 would be the official price tag.

Furthermore, while turf fields usually come with warranties, these warranties are typically for eight to 10 years after which time the fields must be completely replaced for another huge fee.

Natural grass fields require maintaining, but they do not have to be completely replaced every eight years.

Additionally, it’s unrealistic to assume that all maintenance responsibility is forgone when turf is introduced. They need chemical disinfectants, additional crumb rubber and even watering to bring the heat down on hot days. All of this requires money.
Turf can increase temperatures on the field
People argue that turf is handy because it can host activities even when wet, without worry that the field will be ruined. However, turf often prevents these same activities on hot days.

Because crumb rubber is black, the tiny beads absorb the heat from the sun and reflect it back to the players causing temperatures on the surface of the turf to increase exponentially.

A study by the Pennsylvania State University found that temperatures can rise up to 50 degrees hotter on turf surfaces than those on natural grass. Multiple other studies have found similar results.

These increased temperatures can lead to an increased risk of heat-related issues including dehydration and heat stroke.

They can also halt games and practices during the summer and fall due to Kentucky High School Athletics Association (KHSAA) heat rules which set the heat indexes at which teams can not play.
Crumb rubber is full of toxins
Crumb rubber is made up of crushed up tires that were deemed too flammable for landfills. This rubber is full of chemicals. A 2015 study with Yale (as reported by Forbes) found that a sample of crumb rubber contained 96 of chemicals, 12 of which are classified as probable carcinogens, or cancer-causing substances. Other studies have found similar toxic substances in turf fields and crumb rubber.

Turf proponents have argued that while those chemicals and carcinogens exist in crumb rubber, their simple presence isn’t enough to have any harmful effects, but there have been reported cases of blood cancers in soccer goalkeepers who frequent turf fields.

There isn’t enough research to draw a solid cause and effect relationship between turf fields and cancer, but a frequent contact with chemicals and carcinogens certainly isn’t healthy for student athletes.

Furthermore, these chemicals may be harmful to the environment. According to The Safe Healthy Playing Fields Coalition, turf fields can create heat islands because of the chemicals and carcinogens present. Additionally, chemical runoff from the fields can hurt local water systems.
Turf fields don’t actually reduce injury
One main argument for turf fields is that because they are smoother, they reduce ankle sprains and other injuries. This is not the case.

There are a lot of conflicting studies on this topic. The plain fact is that there is too much variation to draw any conclusive data about injuries.

There is one type of injury that is notorious to turf however; turf burn. Turf burn occurs when a player slides or skids across the surface of the field, causing open wounds or painful rashes. Not only are these wounds unpleasant and take a long time to heal, they are sometimes accompanied with various infections caused by chemicals used to clean the turf. These infections, including Staph infections, present a serious danger to players, and if not treated correctly, they can pose serious health concerns.
What do students and parents think?
Chloe Hord (12, MST) is a member of the girls’ soccer team at Manual. During the season, the team was not allowed to practice on their game field because it was also the football field.

“We couldn’t ever practice on the actual game field because that was the football field. They didn’t want it to get messed up for the football team,” Hord said.

Theoretically, turf fields could solve this issue, but Hord also spotted some problems with that proposed solution.

“If you have every single sports team practicing and playing on the turf field, first of all, I don’t know how that would work with scheduling, and second of all I think it would just get worn down even quicker,” she said.

She might be right on this topic. There are multiple reports of turf fields getting worn down well before their warranties are up. So it is possible that the turf fields may not withstand as much activity as people may at first believe.

Hord also noted that turf fields have their issues for athletes in terms of comfort.

So what should JCPS do?

Replacing all of our current football fields with turf fields simply isn’t worth the price. The benefits that turf fields yield are minimum, while the dangers and risks that they pose are significant. Furthermore, these fields are extremely expensive and, as many have pointed out on twitter, the money could be better spent elsewhere.

I’m a sports guy but what a waste of money when the state can’t properly fund our pensions & we have large class sizes. We should lower class sizes at young age so every student can read, write, solve Math problems, & communicate.

I love sports and this would be great, but there are so many other pressing issues facing the education system where money could be put to better use than turf fields.

JCPS should put our money toward more pressing issues. Admittedly, fields at certain JCPS schools are in dire need of repair, but money should be used to fix what we have, rather than replacing them with something that will cause even more issues.