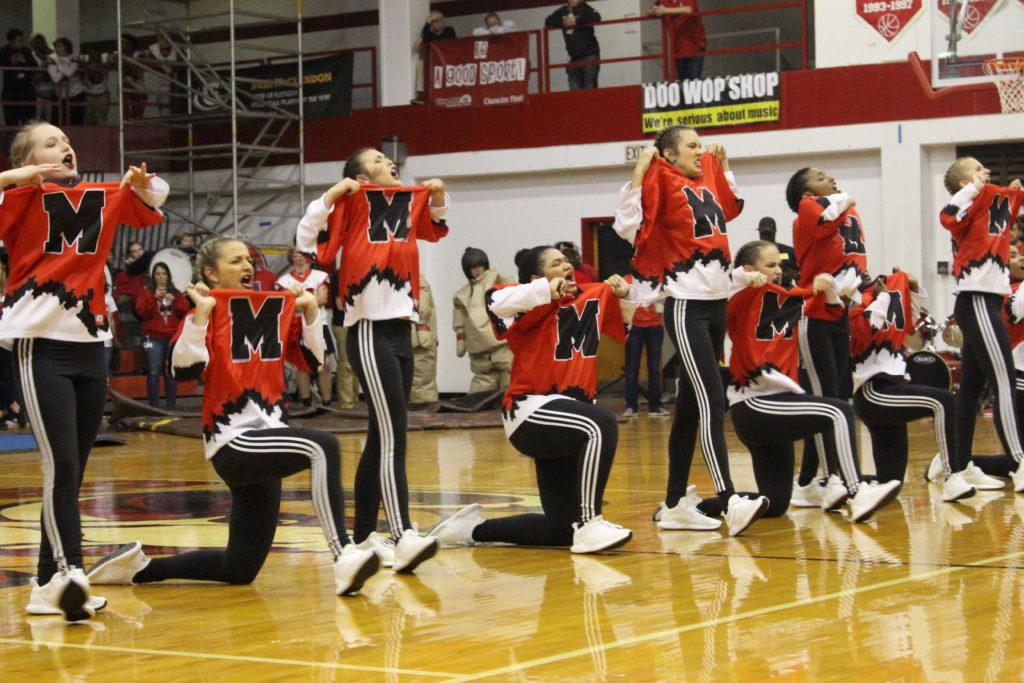 The Dazzlers showing off their gear to the crowd. Photo by Payton Carns

Boys’ Basketball
After defeating both Fern Creek and St. Francis last week, the boys’ basketball team will have a game and a tournament this week. On Tuesday, they will travel to Shawnee to play at 7:30. Then they will participate in the Century Mortgage Derby City Jam tournament at Pleasure Ridge Park from Thursday to Sunday. Their first game will be on Thursday against Desales at 6:30 and on Friday at 6:30, they will face Glasgow. They will play again on Saturday and Sunday against teams determined by the results of the first few games. Check out the bracket here.

Girls’ Basketball
After defeating Scott County, Presentation and Fern Creek last week, the girls’ basketball team will have one game and a tournament this week. On Tuesday, they will travel to Shawnee to play at  5:45. Then, from Friday through Sunday, they will participate in the Queen of the Commonwealth tournament at Bullitt East. On Friday, they will face Notre Dame at 7:30. They will have two more games over the weekend against teams determined by the results of the rest of the tournament. Take a look at the bracket here.

The final from Presentation Academy is 57-22. With the win, the Lady Crimsons move to 4-0.🐐 pic.twitter.com/yZsu7pvwMY

Boys’ Bowling
Last week, the boys’ bowling team faced Eastern. This week, they will have one match on

Thursday. They will face Ballard at Ten Pin Strike and Spare at 3:30.
Girls’ Bowling
Last week, the girls’ bowling team played a match against Eastern as well. This week, they will not have any matches.
Swim and Dive
Last week, the swim team had two meets. This week, the girls’ swim team will have one Meet. On Friday, they will participate in the Girls’ Nite Out meet at the University of Louisville. The start time for this is TBA.
Wrestling
Last week, the wrestling team participated in the Derby City Classic. Manual wrestlers placed second, fourth and fifth individually. This week, the wrestling team will have one tournament. On Sunday, they will take part in the Rumble in the Hive at Central High School. The start times are TBA.

Dance
The Dazzlers will participate in their State Championship at Valley high school this Saturday. The start time for this competition is TBA.