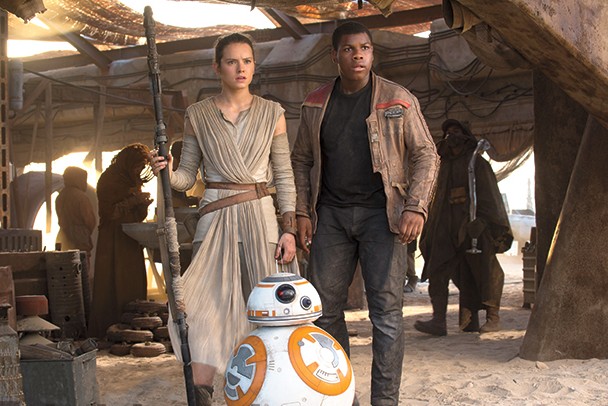 Kicking off the sequel trilogy, “The Force Awakens” balances nostalgia with new life in an enthralling return to form for the saga. Sure, the prequels have their moments, but come on, this is undeniably well-made. It’s a bit too long and a bit too familiar but it recaptured the joy and excitement I felt when I first watched Star Wars.

30 years after “Return of the Jedi,” the story continues as a new regime, the First Order, comes to power. The Resistance, led by Princess Leia (Carrie Fisher), rises against it. Luke Skywalker (Mark Hamill) is nowhere to be seen. This setup is very reminiscent of “A New Hope,” as an ultimate good and an ultimate evil face off and the Jedi are nowhere to be found.

On the desert planet of Jakku, an orphan scavenger (Daisy Ridley) waits for her family to come back for her. On that same planet, resistance pilot Poe Dameron (Oscar Isaac) finds a map to Luke and leaves it with his droid, BB-8, before he is arrested by First Order leader Kylo Ren (Adam Driver).

Horrified by the violence of the First Order, stormtrooper FN-2187 (John Boyega), soon to be named Finn, helps Poe escape its custody. A chase ensues and the pair crash lands on Jakku. At the same time, BB-8 stumbles upon Rey and she takes him in. Lots of things happen and the movie ends up following Rey, Finn, BB-8, Han Solo (Harrison Ford) and Chewbacca (Peter Mayhew) as they try to get as far away from intergalactic conflict, and Kylo Ren, as possible.

“The Force Awakens” is a big movie. It has a long runtime, there are a lot of people in it, it had a huge budget behind it. And there’s pros and cons to all of these things.

Runtime is my biggest issue with every Star Wars movie Disney has produced, not just “The Force Awakens.” It seems like every movie has a weird sequence that relies on CGI rather than practical effects and doesn’t add much to the story other than getting characters from point A to point B. They always feel out of place and take up too much time. In “The Force Awakens,” the rathtars sequence fills that role. As this two hour 15 minute movie plows on, out of place moments, odd sequences and poor editing choices add up. Nothing is ever perfect, but for a movie as big as this, you think they’d go above and beyond to weed out filler. On the other hand, this mammoth runtime can be justified. How else are you going to set up another trilogy that builds off of the two before it?

The cast of “The Force Awakens” is probably the strongest part about the movie. Gwendolyn Christie, Lupita Nyong’o, Domhnall Gleeson and Andy Serkis, all powerhouses in their own right, make up the supporting cast. The lead trio of Ridley, Boyega and Isaac are outstanding; their energy is infectious and their chemistry is undeniable. Driver kills it as Kylo Ren and is arguably the breakout star of this trilogy. And on top of that, Fisher, Hamill and Ford all reprise their iconic roles.

Everybody’s great in it, there’s just not enough of everybody. Isaac is in the movie for maybe 5 minutes, Serkis appears only as a hologram, Christie gets two scenes and Fisher isn’t there much either. Though to be fair, with a cast this strong, how can you give everyone enough screen time?

I know I just harped on the movie for being too long and now I’m saying there’s not enough, but those are the insanely high expectations “The Force Awakens” faces. The original trilogy is borderline sacred to people, and the prequels are almost universally (and unfairly) hated, seemingly killing the saga. And then, the biggest company in the world buys the Star Wars franchise and starts channeling billions of dollars into a new trilogy, a trilogy that has to recapture the magic of the originals and make up for the prequels and stand on its own. That’s a nearly impossible task for one movie.

This is the film that got me into movies. This is the film that helped me find a new passion. Sure, there are better movies out there, but those movies didn’t inspire me to write and consume stories and reviews. I wore my hair like Rey’s for a year after this movie came out. That’s how you should judge it’s impact.

Featured Image Citation: “Star Wars: The Force Awakens” is by Lucasfilms and Disney. This still was released for press and is protected under the fact this is a review and can be used for educational purposes.