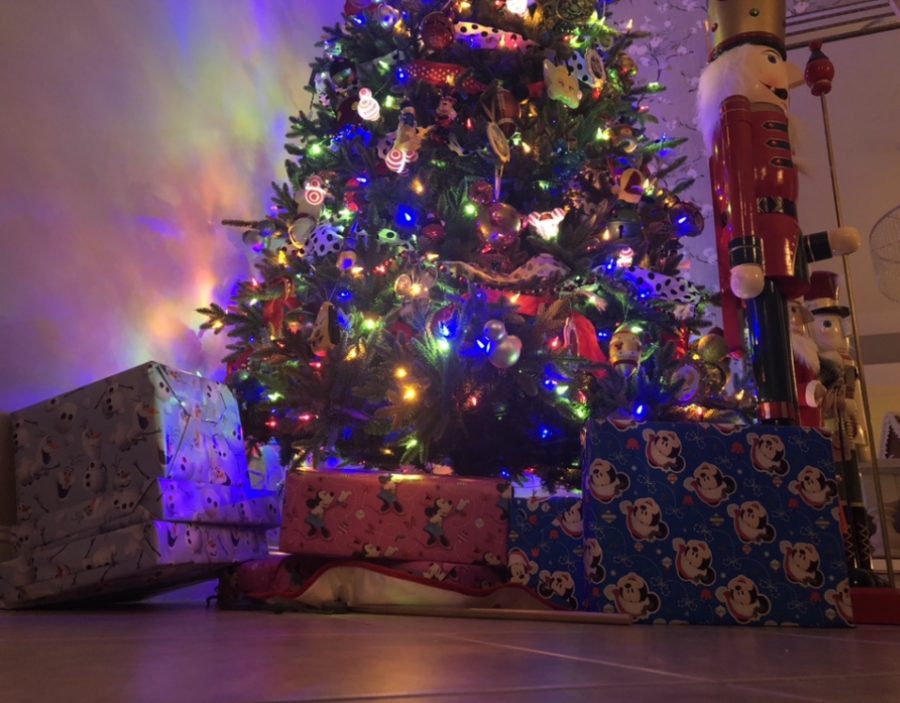 Christmas gifts under the tree. Photo by EP Presnell.

The holidays bring a lot of amazing things, and while you always hear that presents aren’t the most important part of the holidays, they are pretty great. Giving and receiving gifts are a great sign of appreciation, no matter how big or small they may be, so in the spirit of the holidays,

RedEye has compiled our favorite gifts received around this time of year and why they mean so much to us.

Mandala Gupta VerWiebe, social media director: Mandala’s favorite gift is her blue fluffy blanket that she got in sixth grade. The blanket has been called a variety of names, ranging from “Blue” to “Beast,” but it’s always been her blanket. “I still sleep with it every single night, even in the summer,” Mandala said.

Adrienne Sato, sports editor: Adrienne’s best gift was a stuffed tiger, which she calls Tigey, but funny enough the gift wasn’t for her. “My stuffed tiger was actually meant for my sister, but she was too little so I took it,” Adrienne said. She got the gift when she was four and slept with it every night when she was younger. She currently still keeps it on her bed. She also attributes this tiger as the kick off of her love for tigers which she still holds to this day.

Payton Carns, assignment editor: Payton’s favorite gift is her fuzzy blue penguin blanket which she got three years ago. At first, Payton tho

ught it was just another blanket, but she found herself quickly choosing this blanket over any other one. “It’s been to cross country meets, long car rides, curled around me when I sleep, and even at school, you will probably see me at least one time with it,” Payton said.

Macy Waddle, staffer: Macy’s best gift was her Harvard t-shirt that she got in fifth grade.”It was way too big, but now I’ve grown into it somewhat,” Waddle said. She wears it almost everyday, so there’s a good chance you can catch her sporting it on any given day.

Kyra Johnson, staffer: Kyra’s favorite gift was a mini gumboil machine she got when she was seven. “It was fun and unique and functional,” Kyra said.
Electronics
Cesca Campisano, photo director: Cesca’s best gift was both a Christmas gift and a birthday present since her birthday is on Dec. 20th. She orig

inally had a Nikon d3200, which at the time was five years old, but her parents got her the Nikon d750. “I have it with me 24/7. Best. Gift. Ever,”  said Cesca. She loves to take her camera wherever she goes and it helps her on both RedEye and yearbook.

Justin Farris, staffer: The best gift Justin got was his gaming computer. Justin is a big fan of video games which made this gift perfect for him.

Andrew Meiners, social media director: Andrew’s best gift was his Nintendo Wii which he got in Dec. 2006. The Wii is a staple of many people’s childhoods, from the music that plays when you’re making a Mii to the Miis spinning in a circle when you throw the ball back

in “Wii Sports,” there’s so much to love and remind you of being a kid. “It brings back so many good memories for me,” Andrew said.

Jacob Hamm, assignment editor: For Jacob, the Wii was his best gift he’s ever received also. It was a gift for him and his sisters and they shared it all the time, playing a variety of games including “Mario Kart Wii.” “As we got older we played more with friends but even then we would still play Mario Kart together,” Jacob said.

Anabel Magers, staffer: Anabel’s favorite gift is the Nintendo DS she got when she was younger. “My sister had one and I was jealous,” Anabel said.

Liv Bohler, staffer: The best gift Liv got was an iPod. “It was my first experience with anything similar to a phone and I started to figure out the music that I liked,” Liv said.

Maddie Gamertsfelder, editor in chief: For Maddie, the best gift she got was when she was five years old, a pink Nintendo DS. It was the first gift she remembered getting extremely excited about. “The Nintendo DS just came out and I remember tearing open the wrapping paper and giving my parents the biggest hug in the world,” Maddie said.

Jayvon Rankin, staffer: Jayvon’s best gift was his Playstation 4 that he got the year it came out. “It was the new thing people were getting,” Jayvon said.

Kate Benton, graphic design director: The best gift Kate received was a JBL speaker two years ago. It has great sound, which is obviously important for a speaker and she takes it wherever she needs it. “I listen to music for hours a day, and I work best to music, so it’s a lifesaver to me,” Kate said.

Norah Wulkopf, staffer: The best gift Norah got was her MacBook because of how useful it is for her. “I just use it too much, it’s so important to me,” Norah said.
Family
Ofelia Mattingly, staffer: The best gift Ofelia was given was the promise of a new dog. She didn’t get the puppy until May 2016 because it was her aunt’s dog’s pup, but she still got one. “I was promised a dog when I really wanted one,” Ofelia said. Her dog’s name is Dolly and you can see her in the gallery below.

Molly Gregory, staffer: Molly’s gift was also a promise, and while it wasn’t a physical thing she was being promised, it was just as exciting to her. Molly’s parents used to live in London so in 2016 her parents and her flew out there to spend Christmas there. “We stayed in a cute little flat and went to so many good restaurants and saw so many beautiful sights,” Molly said. In addition, she played soccer with her dad. It was her first trip out of the country and she had the best time ever.

Isabella Bonilla, staffer: To Isabella, no physical gift could compare to the gift and having her family all together in the same place to celebrate with one another. “It’s comforting to know both my parents can be home with my brother and I during Christmas, and that if anything else we can quietly reflect on the year together before they have to go back to work,” Isabella said.

EP Presnell, opinion editor: EP’s favorite gift is a combination of two gifts. She has combined two necklaces together to make one that she wears every day. The original necklace was given to her by her parents, which contains three small charms on it. The other necklace had a “Red, White & Royal Blue” charm on it which was given to her by her friend Molly. “It reminds me of my family. I don’t get to seem them a lot with out schedules but I think of them whenever I see it,” EP said.
Music
KC Ciresi, staffer: For KC, the best gift she got was an acoustic guitar, which sparked her love for string instruments. “I received the gift in fifth grade, and have played guitar ever since,” KC said. Since then she has gotten two more guitars, an electric guitar and a ukulele, which she enjoys playing in her free time. It’s one of her favorite hobbies and helps her destress.

Tyler Lericos, staffer: Tyler has his favorite gift to thank for creating a love he could no longer go without. Tyler’s electric piano keyboard helped get him into composing music and gave him a new appreciation for musical scores and other instrumental and composed music.