Countdown to Skywalker: “The Rise of Skywalker” Review 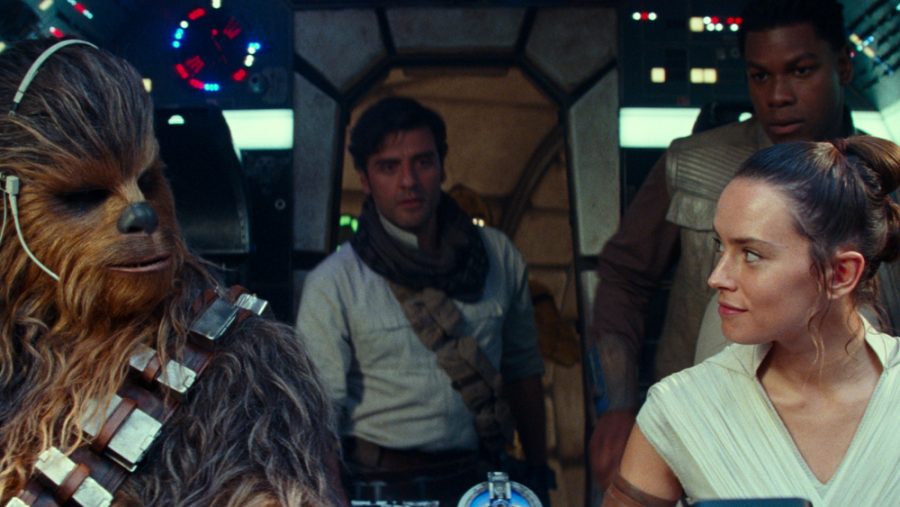 Joonas Suotamo is Chewbacca, Oscar Isaac is Poe Dameron, Daisy Ridley is Rey and John Boyega is Finn in STAR WARS: THE RISE OF SKYWALKER

Spoiler alert: This review contains minor spoilers for “The Rise of Skywalker.” Please proceed at your own pace.

“The Rise of Skywalker,” in some ways, acts as though “The Last Jedi” never happened, and while in the beginning it seems frustrating, it was a good call on director J.J. Abrams’s part. The movie picks up with the ongoing war against the First Order, as Rey (Daisy Ridley) continues training to be a Jedi under General Leia Organa (Carrie Fisher), all the while Poe (Oscar Issac) and Finn (John Boyega) continue working on missions to help the resistance. In addition, Kylo Ren (Adam Driver) is being manipulated by Palpatine (Ian McDiarmid) who has been surviving on a Sith planet since the events of “Return of the Jedi.”

“The Rise of Skywalker” answers many questions that have arisen since the new trilogy has started, including the big one, what is Rey’s heritage? In addition, you get a slight insight to more about Poe’s past and his life before joining the resistance. Some of the new characters that join the trio, like Jannah who lives on Kef Bir, also add insight as Finn grows fond of them and relates with also once being a Stormtrooper himself.

Of course with so much new stuff and new characters, there are some plot holes and some characters aren’t given as much screen time, but for a normal fan, these won’t ruin the experience. Rose (Kelly Marie Tran) and Lando (Billy Dee Williams) are two characters that unfortunately don’t get enough screen time, but this simply has to do with the fact they aren’t main characters and are almost never on the planet the protagonists are on.

While we do get to see a lot of Rey, Finn, Poe and Chewbacca (Joonas Suotamo), Kylo Ren is one of the best aspects of this movie. Adam Driver’s acting is phenomenal and Ren’s character arc gets a rewarding payoff, especially after waiting three movies for it to come full circle. Driver’s chemistry with Ridley is also what makes their scenes so captivating and emotional while watching. Although Poe and Finn are fun to watch, there are moments where you never want the screen to leave Kylo and Rey.

Although the stories of the characters themselves are great, “The Rise of Skywalker” really dropped on its romantic relationships. In the prequels, you have Anakin and Padme and in the original trilogy, you have Leia and Han. In this trilogy though, there is no clear relationship in the end. Poe gets a past female love interest that serves almost no purpose for his character development, Finn has a crush on Rey still, but it goes nowhere, as expected. There are one two kisses in this movie, but there are no final relationships at the end of the movie.

In my own opinion, Finn and Poe would have been a great couple, as the chemistry is very clearly there. Issac even commented that he wish it would have been explored and present in the movie.

This does bring up though one of the key complaints about the movie. It handles romance and sexuality, gender and race in a controversial way, one that many people have commented on. There are a large amount of complaints about how the movie has no female power, but I would beg to differ.

I believe that major franchises like “Star Wars” and “Marvel” have a large way to go in terms of equality. These are franchises that have such a large following that they should be promoting more equality in all race, gender and sexuality but you shouldn’t diss an entire movie based off of that aspect alone. I also believe that many characters are disregarded, especially Rose, but as I said before, there wasn’t a point to her being on the screen as much as people would have liked her to be.

One of the biggest questions though that you may be wondering, is how does this movie wrap up the trilogy and the Skywalker saga as a whole?

This movie is a fun and beautiful ending to the trilogy. For the entire saga, I think it does a good job at tying up the biggest loose ends and presents an ending that takes aspects from all three trilogies (even some aspects from the TV shows “The Clone Wars” and “Star Wars Rebels”), to wrap up the story we have all come to know and love.

As someone who has been a fan almost my entire life, I really enjoyed “Rise of Skywalker.” I don’t think it was a perfect movie by any means (and to be fair I don’t think any movie is perfect), but I found it satisfying and fulfilling most of my dreams for the end. Characters were redeemed, bonds were created, battles were fought and questions were answered. It’ll make you cry, it’ll make you happy and make you feel everything in-between. It’s an experience everyone should experience if you like the Star Wars franchise.

Featured Image Citation: “Star Wars: Episode IX—The Rise of Skywalker” is by Lucasfilm and Disney. This still was released for press and is protected in that this is a review and is being used for educational purposes.