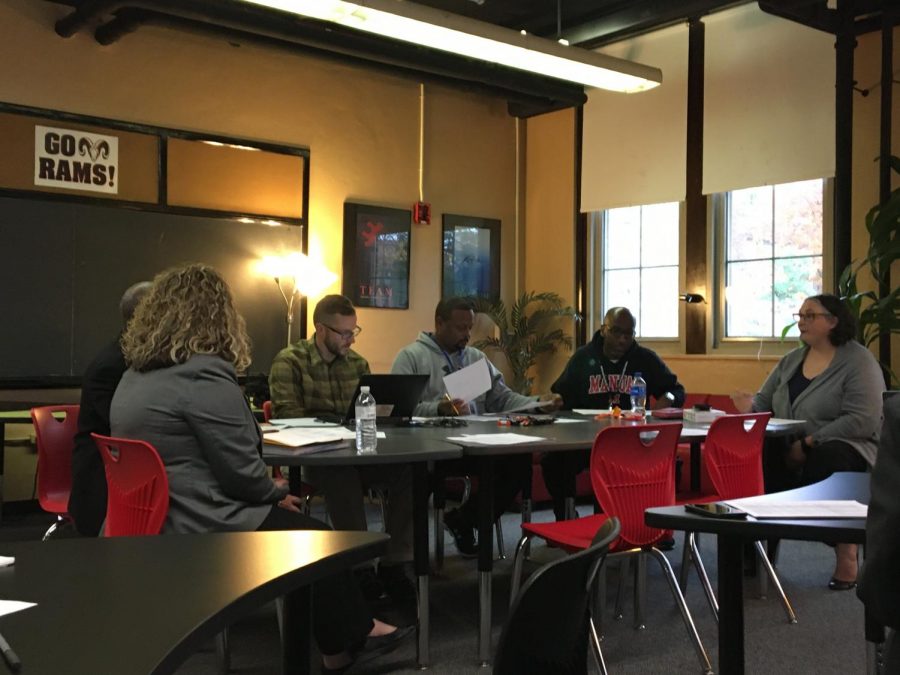 The SBDM meeting met around a table so they could observe a presentation from Assistant Principal Klingenfus.

The School-Based Decision Making (SBDM) Council commenced their January meeting in the MAC Lab at 3:05 with more policy decisions on the agenda.

With the final reading, the new Parent/Guardian Policy was officially adopted with the added phrase of “respect the school, others and themselves” to each section detailing parent/guardian, teacher and student responsibilities. (See the previous policy here)

After that approval, the Principal Selection Policy was on the table due to the newly established verbiage required by the district.

SBDM is discussing the principal selection policy and updates as a result of the amendment detailed in SB 250 from the 2019 legislative session. https://t.co/ET2IpSzrSV

As Manual recently approved their Principal Selection Policy in April of 2019, it was proposed to add in the exact words that were required for inclusion. (See the original policy here.)

However, the verbiage was not in “layman’s terms” because of its usage of “KRS” and “SB 250” and also didn’t make constitutional sense according to parent representative Dr. Robin Weiss.

The council decided to clarify that the policy was under that statute and that it was Senate Bill 250 of 2019 in the revised policy.

Then, the SBDM Council moved on to review of the Budget and Spending Policy, which also had district required language added. (See the original policy here.)

In the original outline of Manual’s budget committee, administration, department chairs and a parent representative met together to discuss their separate needs, then presented their plan to the SBDM Council.

The newly added language included specific deadlines that must be put into the policy, such as one requiring that the SBDM have a full budget plan by March 4 of the previous year, which means that the budget for the 2020-2021 school year must be decided by then.

Dr. Weiss questioned how many parents are chosen for the committee and how they are selected, so language was added that set the number of two parents. They will be elected by the PTSA, but the parents’ membership is not required, only recommended.

As well, parent representative Marian Vassar brought up the issues with having a lack of minorities on the budget committee.

“I would like to make sure this committee is diverse,” Vassar said.

After continuous discussion, the council decided on adding the wording “every attempt must be made to ensure minority representation” to the policy.

Another district requirement was an added cap for principal flex spending, or the moving around of funds already budgeted to other sectors of the budget, before they must request permission from the SBDM Council.

Last year, Manual purchased tables and chairs (and a tarp to protect the floor in the large gym) to be used for ACT and AP testing. Mr. Farmer said these were needed expenses that cost just under $5000, justifying his proposal for that number.

Principal Darryl Farmer capped it at $5000 because of previous expenses, such as testing tables that cost $2500 and a tarp for PSAT testing that cost over $5000 guided for what types of expenses would need consideration from the council.

“It still gives me flexibility and autonomy over the principalship without allowing me to reach a level of craziness,” Farmer said.

Lastly, the district required that schools gave 10% of their gate proceeds from sporting events to the district fund, while the remaining 90% was added to a Fund 22 so that the school could possess those funds to pay staff and carry out upkeep while also rolling over any unused funds to the next year.

With the approval of the first reading, the council moved on to the Anti-Bullying Policy. (See the original policy here.)

Equality in assessing acts of bullying and the appropriate responses are now being discussed. Mr. Farmer said that it's up to an administrator to follow and interpret the guidelines in the student behavior handbook. He suggested that collaboration among administrators would help.

The council changed the language in several sections, such as any use of “she/he” to “they” and the addition of a sentence that recommended parents dissatisfied with the final result of a bullying case, after appeals, to contact the principal with further questions.

This could include parents of bullying victims who are unsatisfied with the punishment given to a student or parents of accused students for in school-matters that don't rise to the level of a suspendible offense (conferences, detentions, etc.).

The meeting adjourned at 4:54 with an in-depth discussion of expenditures, the Student Assignment Plan and Student Enhancement By-Laws on the horizon for February’s SBDM meeting.