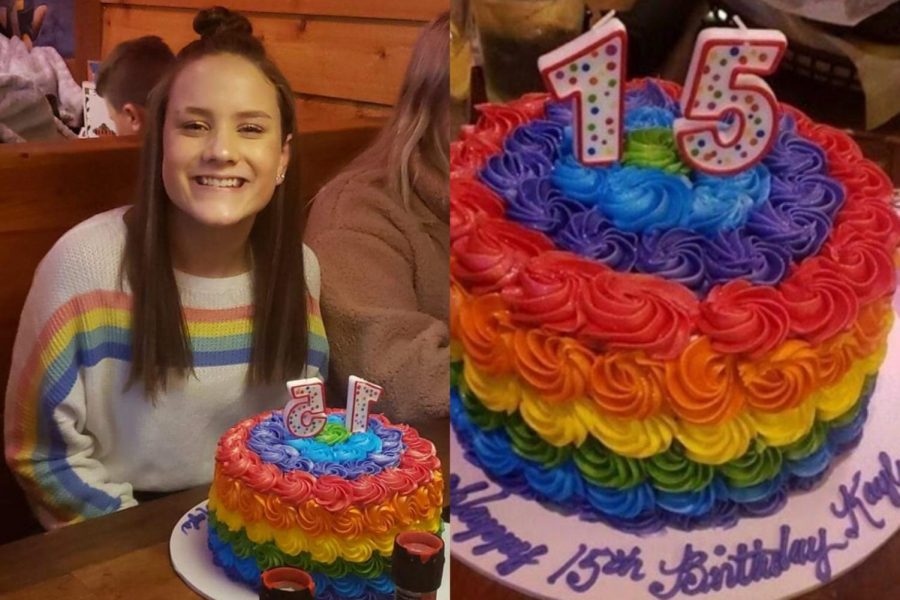 Alford took a picture with the rainbow cake that got her expelled from Whitefield Academy.

If you haven’t been on social media or seen the countless news articles surrounding the former Whitefield Academy student Kayla Kenney’s expulsion over a photo of her celebrating her birthday wearing a rainbow sweater with a rainbow cake, it’s a viral story that has reached national headlines in publications like Buzzfeed News, the Washington Post and many more.

The story arose a week after the post was made and Kayla was expelled. An in-depth article from the Courier Journal explains how the post was shared by a staff member to the school and they immediately expelled her for violating the “lifestyle informed by our Christian beliefs,” according to a statement Whitefield Academy released.

Whitefield is defending their decision to expel Kayla by saying she had previously violated the school rules after they found Juul pods in her backpack, and there were previous incidents before that involving a haircut and cutting class. Kayla says this never happened.

“I never had anything to do with drugs. They had said something a few times about the gay thing but they had no proof of me doing anything,” Kayla said.

In addition to their claims, they also stated that her sweater and cake were “in opposition to the Biblical lifestyle the school teaches,” which is why she was expelled, despite having no proof Kayla identifies in the LGBT+ community.

Accoridng to the Courier Journal, in an email to Kimberly Alford, Kayla’s mother, from Bruce Jacobson, the head of Whitefield Academy, he said the sweater and cake “just kind of represents gay culture” and that she should have “refused the cake.”

The other side to this is Kayla and her mother are saying the cake and sweater were not planned and she just so happened to wear a sweater that matched her cake.

“My mom actually got [the cake] for me. I just asked her to get me a bright pretty cake,” Kayla said.

Since Whitefield Academy is a private school and does not follow JCPS’s guidelines, Whitefield believes they are in-the-right, but they have no place to say whether a student is or isn’t showing a “homosexual orientation” when there is no proof other than a rainbow sweater and cake and some past incidents the school considers a problem.

The school should have no right to use Kimberly Alford’s post against her own daughter because Whitefield was never supposed to see it. If schools were to use students’ and parents’ social media as a way to expel students, a significant amount of students would be getting expelled from schools. Breaking it down even further, the picture posted was a simple birthday celebration photo where she is wearing a simple sweater with a common design with a simple colorful birthday cake in front of her. Kimberly, or any parents for that matter, shouldn’t feel restricted to what they can and can’t post due to a school’s code, unless it is something dramatic or illegal which could cause more harm.

The expulsion did take a number on Kayla though and left her feeling unsure.

“I was just shocked because I never expected someone or a school in general to treat me as a human being like this,” Kayla said. “I was in total shock and called my friends asking what I was supposed to do.”

Another interesting point brought up is that the cake and sweater were both rainbows which made the school believe she was showing signs of being gay, but would the school have expelled her if the colors were different? If she were to have worn the rainbow sweater with a plain cake, would she still have been expelled? If the cake were colors of a different pride flag, would they have put the pieces together?

If the answer is yes, then a lot of brightly colored cake could be argued to be “representing gay culture.”

In any matter though, Alford told the Courier Journal that “the cake was a fun treat” and had nothing to do with her daughter’s sexual orientation.

This incident can be harmful to those who want to come out and may leave many in fear of dire consequences. Coming out is a hard thing to handle sometimes and should be left up for everyone to deal with and decide on their own. The school could have unintentionally outed a student which crosses a new line of wrong which they should apologize for.

The school should also apologize for taking away a student’s education and for sending her and her family into this situation. In 2020, this shouldn’t be a story in the headlines or allowed by any institution.

“Is that what a true Christian would do?” said Kayla. “That’s what I’d ask [Whitefield].”

Whitefield was unavailable to comment on the issue at this time.

Although this is a hard time for Kayla, she’s managing to stay positive about things. She’s staying true to herself and advises people to do the same.

“Be yourself. That’s the best you can do these days,” Kayla said.

Kayla has started attending Spencer County High School where she said “I love it and plan on going there.”

As for taking action against the school, Kayla is unsure what her family’s plans are.

“We are taking it day by day,” Kayla said.

Both photos in the featured image are courtesy of Kimberly Alford’s Facebook page.