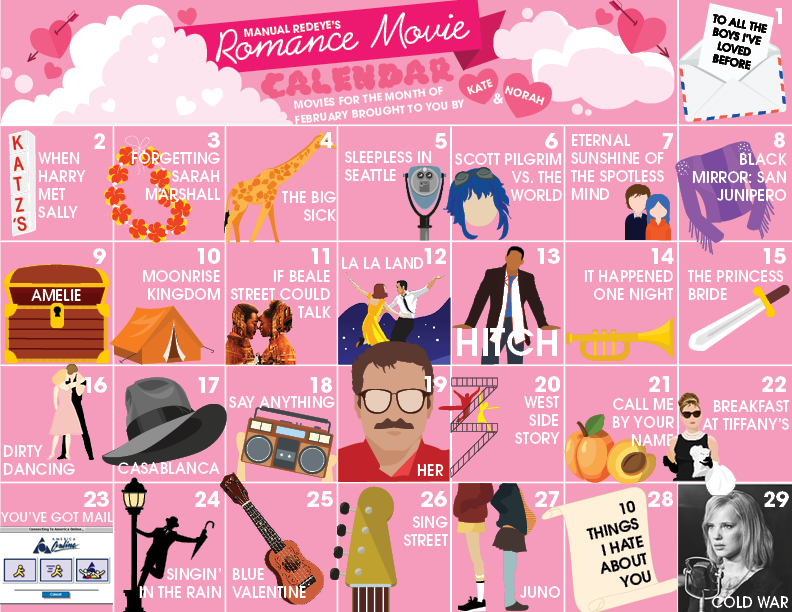 It’s February, and love is in the air. Here’s RedEye’s romance movie calendar for the month.
Feb. 1, “To All the Boys I’ve Loved Before”

Starting off February, we have “To All the Boys I’ve Loved Before.” It’s an adorable and cheesy romcom and probably the best teen movie to come out in recent years. “To All the Boys I’ve Loved Before” tells the story of Lara Jean Song Covey, a debilitatingly shy hopeless romantic who writes love letters to every boy she’s ever liked. When her letters are sent to the objects of her affection, things get hectic, romantic and delightful. It’s like cotton candy in movie form.
Feb. 2, “When Harry Met Sally”

Billy Crystal and Meg Ryan bring to life Nora Ephron’s killer screenplay in this classic romantic comedy. It’s a hilarious and honest look at love and friendship. This is my favorite romantic comedy and I can’t recommend it enough.
Feb. 3, “Forgetting Sarah Marshall”

I hate to sound cliche, but this is a modern love story. Based on Kumail Nanjiani’s own relationship with his wife, “The Big Sick” follows Kumail meeting her parents while she is in a medically induced coma. The film explores intercultural relationships and the power of love.
Feb. 5, “Sleepless In Seattle”

Edgar Wright’s “Scott Pilgrim Vs. The World” is a funny and offbeat love story. It’s probably the best video game movie ever made; Scott must defeat all of Ramona Flowers’ evil ex-boyfriends to win her heart and date her. Plus, who can resist the dorky charm of a late-2000s Michael Cera?
Feb. 7, “Eternal Sunshine of the Spotless Mind”

“Eternal Sunshine of the Spotless Mind” is one of those movies that you have to watch multiple times to really understand, which isn’t remotely a bad thing because every scene is packed with so much attention to detail and every shot is so beautiful that you could watch it over and over and only start to get tired after the fifth watch. One of the best things about this movie is the way the plot unfolds — as the viewer, you find out what’s going on just as the characters do. This movie follows Clementine (Kate Winslet) and Joel (Jim Carrey) through their relationship, starting from their implied first meeting. However, their realities unfold in such a genuine and beautiful way that for the viewer, there is never a dull moment.

Black Mirror has some hits and some misses, “San Junipero” being the former. It’s a beautiful queer love story that also functions as a great episode in one of the most interesting science fictions shows today.
Feb. 9, “Amélie”

This is a love for shy people. “Amélie” follows its titular character as she meddles in the lives of those around her and leaves clues for Nino, the apple of her eye. It’s whimsical, French and adorable.
Feb. 10, “Moonrise Kingdom”

This is a meticulously crafted, quirky and hilarious coming of age story is well on its way to being considered a classic. Leading up to a massive storm, two lovestruck tweens run away together and are pursued by a boy scout troop and the local authorities. Like everything Wes Anderson does, it has an incredible cast, gorgeous symmetry and inventive camera movements.
Feb. 11, “If Beale Street Could Talk”

“If Beale Street Could Talk” is so much more than a love story, so it almost feels wrong to classify it as one. That being said, love motivates every character in this movie. It’s a heartbreaking story that shows how love can survive racist systems and makes you wish those systems never existed.
Feb. 12, “La La Land”

In “La La Land,” Damien Chazelle blends technicolor wonderment with an otherwise mundane romance. It’s a musical for the rest of us. The bright landscapes, charming stars and catchy songs breathe life into the monotonous and painstaking process of chasing your dreams.
Feb. 13, “Hitch”

“Hitch” is a silly and fun romantic comedy from the mid 2000s that is elevated by Will Smith and his charisma. It’s genuinely funny and sweet. A total popcorn flick, “Hitch” is a nice movie to have on around Valentine’s day, just for funsies.
Feb. 14, “It Happened One Night”

This is Hollywood’s first rom com, and you can see why it inspired such a prolific genre. Clark Gable and Claudette Colbert ooze charisma. It’s absolutely delightful.
Feb. 15, “The Princess Bride”

Everything about this movie is iconic: every scene, every actor, every line. It’s the perfect family film that just so happens to have a great love story in it as well.
Feb. 16, “Dirty Dancing”

“Nobody puts baby in a corner!” “Dirty Dancing” has that unique 80s feel that makes it fun and heartwarming to watch. Watching two people fall in love to the music is a trope that people have always adored. And the lift in the final dance! Who could forget?

Set during World War II, “Casablanca” follows Rick Blaine (Humphrey Bogart), a cynical club owner who’s sympathetic to Nazi resisters and refugees, as a former love reenters his life. I don’t want to give anything else away, but this is a movie that everyone should see.
Feb. 18, “Say Anything”

Young John Cusack is irresistibly darling in Cameron Crowe’s 1989 classic, “Say Anything.” Lloyd (Cusack) attempts to win over the heart and the father of Diane (Ione Skye), an introverted and dedicated high school student. It’s a sweet tale of young love.
Feb. 19, “Her”

“Her” might be the most heartbreaking and inventive film about love I’ve ever seen. It’s easy to write it off as the movie where Joaquin Phoenix falls in love with a computer, but it’s so much more than that. Spike Jonze’s intelligent science fiction explores what it means to love another person and how we cope with the loss of love.
Feb. 20, “West Side Story”

Twirling skirts, perfected dance numbers and glorious melodrama fill every frame of “West Side Story.” I think it’s the best stage-to-film adaptation of all time and one of best films ever in general. “West Side Story” is nothing short of a masterpiece.
Feb. 21, “Call Me by Your Name”

“Call Me by Your Name” presents the thrills of young love; it’s all-consuming, sensual and beautiful. It’s definitely a good movie to cry through.
Feb. 22, “Breakfast at Tiffany’s”

Breakfast at Tiffany’s oozes style and personality as we travel through 1960s New York City with Holly Gollightly and Paul Varjak. It’s reached such an iconic status that most people think of this movie before they think of the Jewelry Store. If you ever have “the reds” then watch this movie, it’ll calm you right down and maybe make you shed a tear.

It’s pure, unadulterated cheese. Tom Hanks and Meg Ryan are competing book store owners who unbeknownst to themselves fall in love over email! Only a genius could craft something so perfect.
Feb. 24, “Singin’ in the Rain”

“Singin’ in the Rain” is pure joy in movie form. Is it cheesy? Absolutely. Is it goofy? Definitely. Is it over the top? Without a doubt. But it’s also funny, sincere and undeniably charming. I adore this movie. It has amazing musical numbers, and the cast is crazy talented. Gene Kelly directed and choreographed the film, in addition to starring in it. Donald O’Connor is an incredible dancer, and every word that comes out of his character’s mouth is hysterical. Jean Hagan’s Lina Lamont is fantastic. Her performance could easily be over the top and laughable, but she’s able to make Lina sympathetic. Last but not least, is Debby Reynolds. She learned how to sing, dance and act for this movie, and she steals the show easily. I can’t say enough about this movie, but I guess I’ll shut up now. I think this is the best and happiest movie of all time.
Feb. 25, “Blue Valentine”

Not every love story is a happy one; this one’s for the cynics.
Feb. 26, “Sing Street”

I’m a sucker for teen movies and I’m a sucker for musicals, so this is right up my alley. “Sing Street” is a feisty and fun story of first love and teenage rebellion. It has a killer soundtrack, a ton of heart and plenty of 80s imagery that doesn’t burden the story with nostalgia.
Feb. 27, “Juno”

I freaking love “Juno.” I think my sense of humor and speaking patterns were influenced by this movie more than any other. This is a loving look at teen pregnancy that neither vilifies nor glorifies its subject. Juno (Ellen Page) is treated like a human being, not a statistic or a joke or a charity case like teen mothers are often portrayed. Page is absolutely amazing, and again, who can resist late-2000s Michael Cera?
Feb. 28, “10 Things I Hate About You”

“Cold War” portrays the magnetism two people can feel towards each other, a connection that not even the Soviet Bloc can destroy. Set during the Cold War, the story follows a pair of artists torn apart and reunited, forever entangled in each other’s lives.