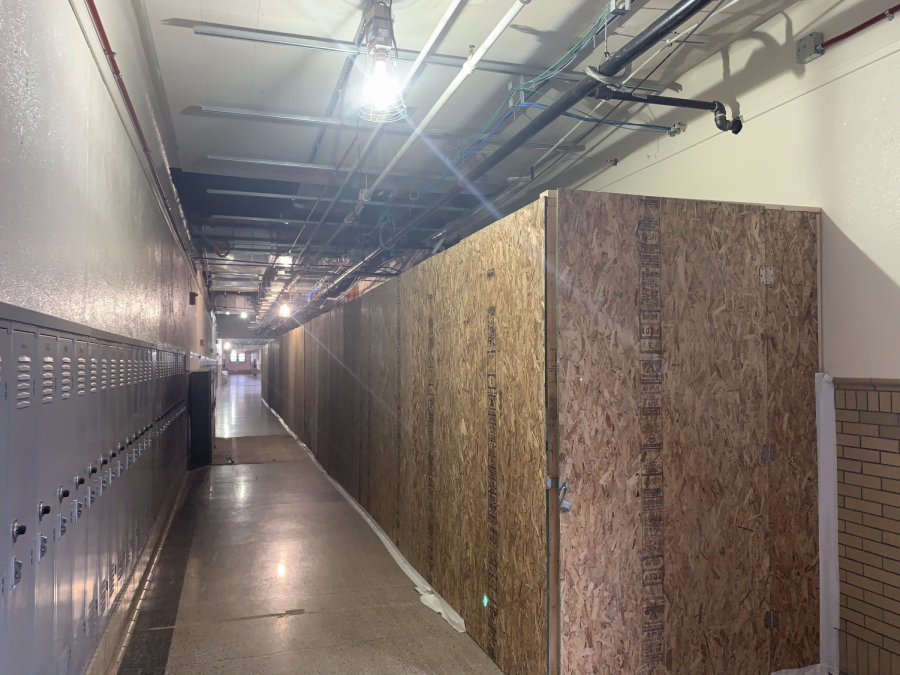 Part of the third floor on Manual's southwest wing is blocked off due to renovations where contractors are installing drop-ceilings and new HVAC equipment. Photo by Reece Gunther.

Several Manual teachers have filed complaints with the department about air quality and building maintenance procedures as a result of the ongoing renovations.

Mr. Applegate (Science) filed the most recent report in October. In that report, S&E noted that they “performed air testing for any critical elements. Based on the testing, temperature, humidity, VOC and carbon dioxide levels were acceptable.”

However, the report also noted many shortcomings of the contracting companies responsible for Manual’s renovations and their responsibility to ensure “comfort” within classrooms.

Specifically in room 320, S&E noticed ceiling plaster on various surfaces around the classroom stemming from drilling to support HVAC installments, plaster dust “deposited on the return air vent at all three unit ventilators” and dust on various surfaces, including inside of a 3D-printer.

In response to their findings, S&E sent a report to Manual’s HVAC contractors, R&R Inc., emphasizing the cleanup of “dust (or other pollutants) generated by work in occupied building” and utilizing “barriers (drop cloths/plastic sheeting)” that “should always be in-place prior to work which generates dust, to help minimize the amount of cleanup following the work.”

S&E also stated that heating and air conditioning systems should not be in operation during “dusty indoor work” unless air plenums are used. Further, they suggested that the contractors should “thoroughly clean up the dust from all surfaces in room 320, the adjoining lab and storage room. This should take place as soon as possible since health concerns were made. Wet-wipe methods or vacuuming should be done to remove the plaster dust.”

They also suggested that Manual’s housekeeping staff clean return air vents and supply diffusers while also replacing the filters in all three units. All of these suggestions have been implemented.

Other reports stemming from the renovations included reports of excessive dust in room 203 and an odor in the hallway of the library in March 2019.

In the first case, S&E noted that there was no noticeable dust from construction and commended the contractors on their cleanup efforts. They recommended that Manual’s housekeeping staff complete a more thorough cleaning of the room on a regular basis.

Renovations, specifically ceiling tile removal, caused the odor in the library hallway. “Several glue dots were removed from the hallway ceiling, and it was apparent that the glue dots are the source of the odor. Some of the glue dots were ‘soft’ in the middle, thus off-gassing an odor,” the report said.

Despite the odor, “VOCs (in ppb) were not detected. Temperature, humidity and carbon dioxide levels were acceptable. No carbon monoxide or hydrogen sulfide were detected.”

S&E coordinated with Manual’s housekeeping team to arrange the placement of a fan in the hallway and suggested keeping windows open for ventilation.

Renovations are expected to continue through at least summer 2020 and in Manual’s December SBDM meeting, council members discussed several requests for air purifiers to be provided to classrooms because of the dust and construction residue.

Instead, Mr. Farmer emphasized his wish for more custodial staff, but a district-wide shortage is preventing that from being an option. Manual will, however, continue to look into possible ways to improve the comfort and environmental quality of the school.