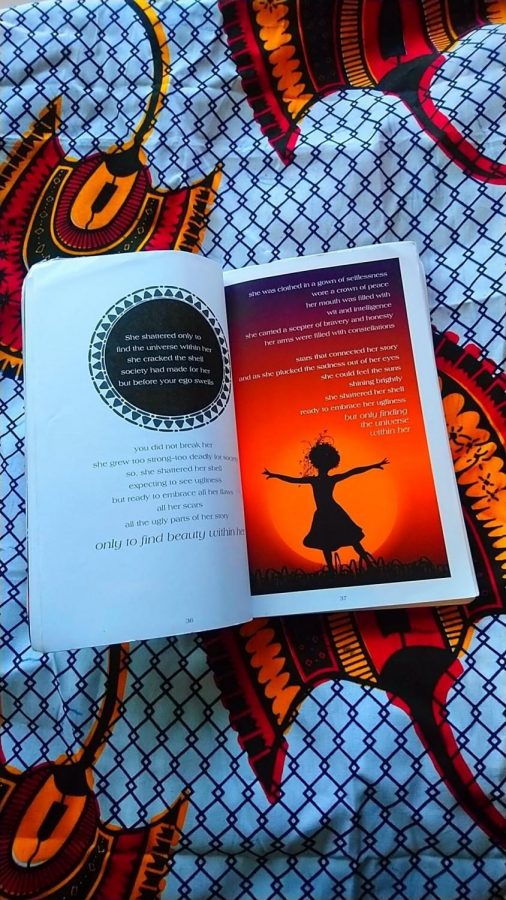 13-year-old Believe Chekenya pulled her short hair back into a ponytail and adjusted her headphones as she prepared to clean out the fridge. She hunched over the fridge capering between the sink and trash can, clearing out expired goods and wiping down drawers. Suddenly, as she went through the old vegetables, her face went blank as a single phrase suddenly dropped into her conscience —  “becoming a revolution.” A shock went through her system as her face widened with apprehension. She turned around to her mom. Tears pooled up into her eyes as her face burst into an expression of pure joy.

“Ma, I’ve got it. I know what I’m going to name my book,” she said.
Igniting
Believe Chekenya is currently an HSU major at duPont Manual High school.

“I’m not going to lie, I didn’t expect to make it to Manual because I was like all these people are way too smart. But I do love it even though I got lost for the first 3 weeks,” Believe said.

Despite these claims, Believe is an outstanding student.

“People defined me as the smartest kid in school and for me, it wasn’t about being smart academically, it was about being humble. People didn’t like that I wasn’t willing to be loud about the gifts that I have been given so they flocked to other people who were willing to brag about it,” Believe said.

As well as being a good student, she’s also an amazing friend.

“Believe is a literal version of a shoulder you can cry on; someone who is always there and willing to listen to you when others aren’t. She’s outgoing, smart and her heart is beautiful in every way,” Talise Hall said.

While juggling school as well as her own passions Believe also spends much of her time watching over her three younger siblings whom she holds in high regard.

“I’m the oldest so basically in African tradition, it’s always that the oldest is like a second mom. It’s very tiring sometimes but they are such awesome little kids and they each have their own special talent,” Believe said.

“My youngest sister, she’s super sassy and her confidence and how she’s boldly herself it’s something that I was just like wow I wish I had that when I was a kid,” Believe said.
Growth
When Believe was a kid, she was very reserved, often unable to voice her opinions confidently (unlike her 4-year-old sister.)

“I allowed a lot of the things I had witnessed and experienced shape me for a very long time,” Believe said.

For instance, while living in South Africa, Believe recalled seeing a man dragging his girlfriend out of the house and beating her with a brick. She remembers the girlfriend being very outspoken so Believe thought that if she hid her opinion and was reserved, nothing like that would happen to her.

It was through writing that Believe initially began to find an alternative way of breaking out of her shell.

When she first began writing, contrary to what some might expect, she wasn’t automatically good at it. Her first and only B was in her 5th grade English class, where she first began to explore poetry.

“I didn’t fully gain confidence in my writing for a very long time because for the first two years of my writing it was a lot of sad depressing stuff which kind of like reflected the mood or atmosphere that I was in in my growth,” Believe said.

It was through not only writing but also through her faith that she truly found her voice and began her journey towards sharing her voice with the world.

“I remember when I fully committed to being Christian eighth grade.  It was a lot of being vulnerable in front of God and being like ‘okay God, this sucks and there’s a lot that I need to do. I know that through you I can find a voice and that even though I’m insecure right now and struggling with depression and anxiety that you’re capable of taking away all of these things.’ I had to realize that with some people the miracle is immediate but for me it was something that took time. It was a journey,” Believe said.
Setbacks
As her writing expanded and matured, Believe branched off from writing her work for herself and thought about sharing it with the world.

“I’ve always thought I’d be pretty cool if I wrote a book. I always said maybe when I’m older, but my mom asked why later and not now. I explained it’s because I’m too young, and I can’t even write properly. My mom was just like go for it, so I went for it and I wrote my first book,” Believe said.

However, though she completed the book, it wasn’t the one. Despite all the work and effort she put into it, she had to abandon the entire project. She remembers turning to God with her book, but He told her that this was not what He had intended her to do so she obediently set the project aside.

“Because I thought so strongly that this was something that God had promised me and it was something that I held very close to my heart even after years of disbelief, I wondered what would happen if I can’t do it. How do I move on?” Believe said.
Perseverance
Despite the failure of her first book and her reluctance to try such a feat again only to be crushed, Believe’s mom refused to let her give up.

“My mom played a big role in this, she’s a person of very strong faith and convicted about what she says. I admire her, for she’s always been the one pushing me throughout this journey. She believed in my dream even when I didn’t,” Believe said.

For every single day in the summer of 2019, Believe woke up at 4 am and worked on her book. Through her youth group, she found connections to an illustrator and publisher whom she talked with for hours bringing the vision for her book alive. She felt as though if she achieved her dream, her poems could spark inspiration in others to do the same.

“I felt as though I could convince somebody else not necessarily to write a book of their own, but to pursue a dream that they think is impossible,” Believe said.

When she had finally finished her second book, she was hit with the impact this could have on her family.

“I was hit with the realization that this could change everything including my family’s financial situation and the dynamics of my home. My parents won’t have to work as much as they do,” Believe said.

Even though her first effort had failed, Believe didn’t let that mark the end of her journey towards finding herself and fulfilling her passions. Through faith in herself and in God, she found her way.

“Looking back at my first book, I was like thank you God for stopping me. I didn’t understand until later when I was looking over it that it was bad. Because at the time I thought it was the best thing ever as it was my best writing. But it was born out of a lot of wrong intentions of my heart, for when I was really young I just wanted the money and this and that,” Believe said.
Jubilation
Believe casually watched TV when the doorbell rang and she spotted the delivery man outside. Her dad ambled to the door and shut it; he took a glance at the package. He froze in his tracks as he hurriedly read through the package description. His face broke into a radiant smile as he walked the package over to Believe.

Apprehension flooded her face as she swiped the package out of his hand; her fingers got caught while she raced across the folds of the package removing tape. She flung the box open to reveal the very first copy of “Becoming A Revolution” by Believe Chekenya.

She stared at the book in pure disbelief as tears pooled in her eyes.

She gingerly lifted the book that she had slaved over for months out of the box and stroked the cover illustration as she hovered her finger over the author’s name.

“I actually did it,” she said.

Today, Believe has already sold over 100 copies of her book, with a website and instagram promoting her poetry. You can purchase her book here.

She is still figuring out what her future may hold including where she’ll go for college and what she’ll study.

“I’m super excited to go out of state. I was thinking ivy leagues please come at me. Stanford is so beautiful it’s ridiculous. Now the major I chose is called undecided,” Believe said.

She expresses interest in perhaps entering the medical field and becoming a gynecologist, and she certainly has the work ethic for it. However, despite looking towards different career options, Believe says she will always hold poetry and writing with her in her heart no matter where her future leads her.

“I do want to continue writing no matter what career I go into, but I want it to be more of a side thing rather than my main career,” Believe said.