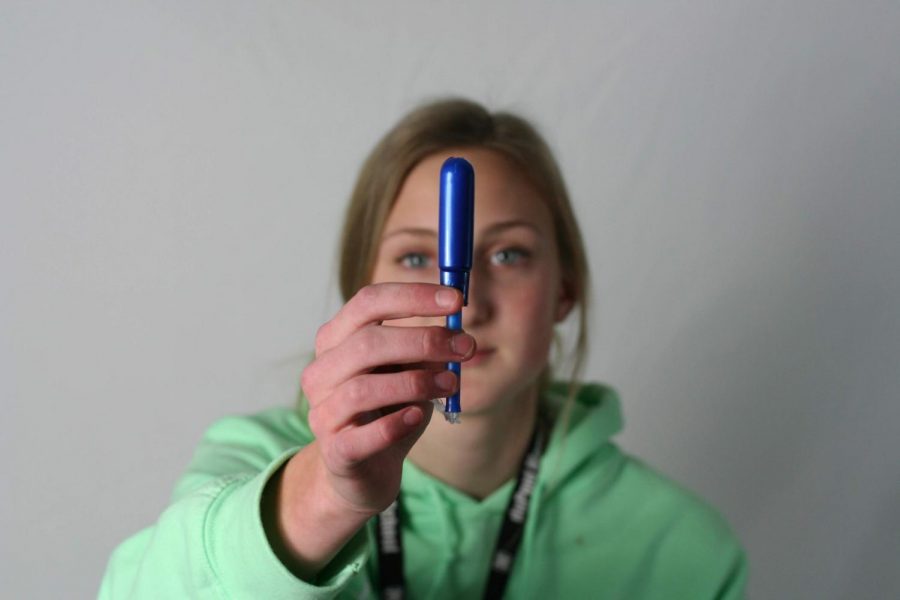 "I think feminine products should have to be in schools because girls have those moments of, “Oh shoot, I didn't think I was gonna start today,” and it can literally save someone's day," Cassidy Adwell (10, J+C) said. Photo by Kate Benton

After an exhausting eight hour school day, sophomore Cassidy Adwell (10, J&C) trudged into cheerleading practice, which would take up another three hours. The day wasn’t over yet.

To take some of the weight out of her two backpacks — one for cheer and one for her textbooks, lunch and dinner — Adwell wore her cool gray exercise shorts throughout the school day so she wouldn’t have to pack extra clothes for practice.

In a daunting realization, Adwell froze. She felt that something was not right.

Racing to the nearest bathroom, Adwell found it was too late. Her shorts were ruined and bore a stain that stuck out like a sore thumb.

“There is just a feeling that you get when you’re about to start,” Adwell said.

It felt like game over for Adwell. Aunt Red had come to town. So had Aunt Flow, traveling all the way from Red River Gorge while surfing the Crimson Tide. In other words, it was “that time” of the month.

The minutes ticked by as cheer practice was about to start. Seven minutes left, six minutes left…Frantically, Adwell looked left and right until her eyes locked onto a beacon of hope. In a small bin adjacent to the bathroom mirror sat a feminine pad. Adwell breathed a sigh of relief as she reached for it and swept her eyes the small note attached to the station of other feminine hygiene products. Once she saw the doodled smiley face, Adwell beamed, her face mirroring the message.

“If that wasn’t there, I would’ve been screwed,” Adwell said.

For $50 every three to four weeks, Mrs. Ritchie (English) and other teachers take the time to shop for and supply a station of feminine products for Manual’s students. This endeavor is not funded by the school, but spent with money out of their own pockets.

While co-directing a teen summer workshop known as the Louisville Writing Project, Ritchie supplied restrooms, and was inspired to carry out the trend at Manual.

“In a high school bathroom, it’s super industrial, not homey at all, cold and bare a lot of times. This brought to my attention as a high school teacher how the atmosphere would make it so much nicer to have things like that available,” Ritchie explained.

Because her classroom is directly across from a women’s restroom, Ritchie recognized the need.

“People are often caught off guard, especially women when it’s that time of the month. I incorporate things like feminine products to make them feel like there was never going to be a disadvantage for being caught unaware, being in a place that’s not familiar to you,” she said.

It took a while for the products to begin running out at first, but when they started, they didn’t stop. It took some time for many students to discover what was available for them, since they weren’t used to accommodations being there in the first place.

Some students carried their own emergency packages before the introduction of the bathroom’s station. For example, Karlie Brockman (10, J&C) carried a cosmetics bag long before menstruation.

At one time, Brockman was able to meet Adwell’s needs during their chemistry class. It was another quick, scrambling escape similar to the incident at cheerleading.

“It was honestly a lifesaver,” Adwell said.

This then ponders the question: What about the rest of the student body?

As many as 50% of Manual’s 1,900 students need feminine products, and only a few female teachers are supplying them.

“I was honestly shocked when I found out that Ms. Ritchie and the teachers paid out of pocket. Period products are expensive, and every girl should have access to them,” Brockman said.

Unfortunately, not every girl does. Feminine products do not qualify as a free or non-taxed necessity in the state of Kentucky, and those under the poverty line — about $24,000 a year for family income — can’t afford the extra expenses.

In a state where more women than men fall below the poverty line, it seems evident that Kentucky would not tax menstrual products. On the contrary, 36 states place a tax on feminine products, and only three states mandate the use of these products in schools.

In November of 2019, Rep. Attica Scott proposed House Bill 85, which would require all public universities in Kentucky to make menstrual products available for students to use for free. A University of Louisville student contacted Scott, saying that education was interrupted when students had to leave campus to buy tampons or pads, prompting the bill.

According to MarketWatch, one in five girls have missed school due to a lack of access to period products.

When women cannot afford or have free access to feminine hygiene, they resort to unsafe methods. This could include toxic shock syndrome from wearing a tampon for too long or bacterial disease from using alternatives to menstrual products.

“To many girls, periods are a sensitive topic. They don’t feel comfy asking someone that they don’t know if they have anything,” Adwell said.

A few weeks following Adwell’s accident before cheer, Brockman awoke to her mother at the foot of her bed: she had overslept. Brockman sprang from bed, threw her things together and bustled out of the house without even zipping up her backpack.

Once off the bus, Brockman was immediately stuck in hallway traffic as students struggled to and fro, trying to get to their classes on time. Brockman bumped past student after student, her body being jostled here and there like turbulence on a plane.

Later, in fourth period, Brockman felt a disturbance not unlike the one Adwell felt. She stood up, did a quick turn around, and sat back down again. Hesitantly, she leaned over to Adwell seated next to her and tapped her on the shoulder.

“It’s Shark Week, two days early. Do you have anything?” Brockman whispered.

Without a word, Adwell leapt to her feet and left the room, leaving Brockman dazed and confused. Moments later, Adwell returned with a single tampon that contained a single sticky note with scrawled handwritten writing. She handed it to Brockman, who tucked it away, but not without reading the note.

Once she saw the doodled smile on the note, Brockman smiled, feeling at ease.