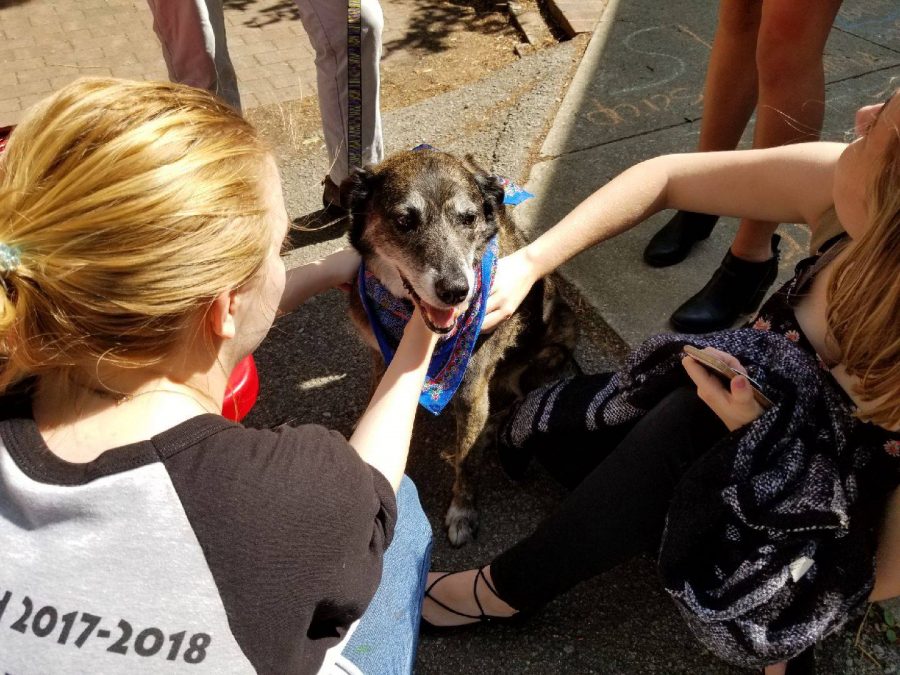 Petting a dog releases positive chemicals in both the human and the dog. Cookie enjoys the company of students at lunch. Photo courtesy of Cookie the therapy dog on Facebook.

It’s a dreary Thursday at Manual. Students lug their backpacks to the lunchroom and sit down to eat. Many pull out their textbooks to squeeze in a few more problems, a few more sentences, a few more minutes of studying before they go back to class.

Eventually, students become aware of a shift in the room. Excited voices rise over the chatter. Near the door, a gushed “Cookie!” can be heard, and several “Aww”s float over the noise.

Some students stop talking and look to the entrance of the cafeteria. There, a few students are crouched on the ground, and one or two are bent over. They are smiling and laughing, their books left forgotten on the lunchroom table.

Dr. Cliff Kuhn stands nearby wearing khaki pants and a brown cap. He smiles as the kids flock to him, but it isn’t him they’re interested in. In his left hand, he holds a leash. Attached to the leash is a smiling brown and black dog named Cookie. She wags her tail as students pet her.

Throughout the rest of lunch, Cookie and Dr. Kuhn visit tables, bringing with them smiles and giggles. They make their rounds through all five lunches, taking breaks so that Cookie can rest and have a snack.

While it may seem like Cookie is just there for fun, she’s actually doing a very important job; helping the students de-stress and relax.

In 2017, after hearing about such studies, Mrs. Medley suggested that Manual invest in a therapy dog. After doing some research, she discovered that there was actually a group in Louisville called Wags that trained dogs and handlers to become certified therapy dogs.

“I found out just by happenstance that Mr. Kuhn’s dad, Dr. Kuhn, was one of the people who was training a dog that he had rescued,” Mrs. Medley said. “And he’s been at Manual ever since.”

“We should do something to ease the culture and give some resources to people when they’re under stress,” he said.

As a retired psychiatrist, he had a lot to say about the reasons that dogs illicit the chemical responses in humans.

“The reason that therapy dogs are beneficial to us humans is that they know why they’re there, and they’re able to give themselves completely to the moment when you’re petting them, and that kind of attention and that kind of presence doesn’t need words,” Dr. Kuhn said. “[Cookie] knows that if you wanna help somebody, you gotta be fully present.”

Medley agreed that part of the benefit of therapy dogs was simply their presence.

“A dog loves unconditionally,” She said “They don’t ask you a question, you don’t have to talk to them, they’re not going to talk back, they’re just there leaned up against you loving you. It’s just pure unconditional affection, and there’s nothing really better than that.”

Mr. Kuhn, Dr. Kuhn’s son and one of our assistant principals, was also enthusiastic about Cookie and her positive effects on the students.

“Manual, or any school can be a stressful for any student. Stress is a normal response to life,” Mr. Kuhn said. “When I’m in the middle of a stress response, having something like a dog ultimately to focus me in on that and take my mind off it, I think it’s good for students to get that break.”

Cookie and Dr. Kuhn have worked hard to get to the point where they are now. In order to be certified as a therapy dog and handler, they had to go through a year-long training course where they practiced their voice commands and staying calm in hectic situations. After the course, they had to take a test.

During the test, the administers worked hard to trick Cookie and Dr. Kuhn into making mistakes. This way, they could ensure that only truly qualified therapy dogs could get approved. They snuck up behind Cookie to startle her and dropped food in front of her to distract her, but Cookie was resolute.

Still, Cookie aced the test with a perfect score. Most dogs and handlers have to take the test multiple times, but Dr. Kuhn and Cookie passed with only one missed point which came when Dr. Kuhn mistakenly thought Cookie was doing something wrong and got angry with her.

“Both Cookie and I know that I’m the weak element in this relationship, and I recognize that and all I do is I just focus on her,” he said. “She knows what this is about more than I do, and it’s a learning process for me.”

Students and staff alike, everyone agrees that when they see Cookie, she brightens their day.

“It looks like she’s always smiling, and she makes my day every time,” Scarlett Hawpe (12, YPAS) said. “She’s so calm, and she’s so happy. You can tell she’s so happy and in her element.”

Cookie and Dr. Kuhn try to visit Manual once a week on Thursdays or every other week, but as Dr. Kuhn mentioned, different things come up that prevent them from coming, so it is somewhat inconsistent.

“I wish she came around more often,” Hawpe said.

This sentiment was echoed by other Manual students, and Medley discussed how much she loved when Cookie came around. She described her excitement every time Dr. Kuhn calls her to ask if he can come in with Cookie on any given day.

“I’m saying yes before he gets the question out because we want Cookie here,” she said.

Medley said that her favorite aspect of Cookie is the visual relaxation that she gives to students.

Dr. Kuhn also expressed his excitement at being able to bring Cookie to Manual and how becoming a therapy dog handler has taught him more about his field of study.

“The lesson I’ve learned in being her partner in this is that even though I’ve been a physician my entire life, you can always be more present and reinforce the idea of being fully attentive when you’re trying to help somebody,” he said. “[Cookie] turn[ed] out to be the smartest dog I’ve ever worked with.”

Dr. Kuhn and Cookie leave the cafeteria after lots of petting and affection. Cookie is worn out, but she’s wagging her tail and smiling. She’s done an important job, and she’s ready to go home and rest. Dr. Kuhn just looks down at his dog and smiles.