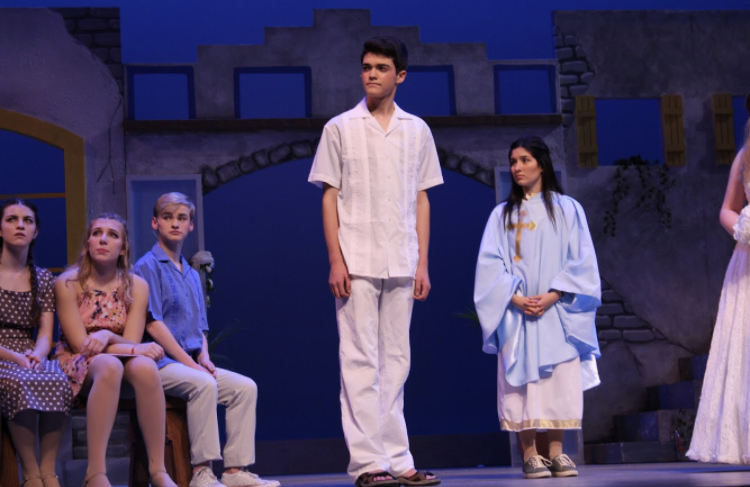 One of Cast B's dress rehearsals in November, where Roman Tate takes the lead.

As the lights shine brightly on the stage, illuminating the colors of the set and making the glitter on the actors’ costumes shine, Roman Tate (10, YPAS) steps out from behind the curtains as Sky, Sophie’s fiancé. A smile grows across his face, and he steps into the charming character he’s been rehearsing to play for months. It’s not the first time Tate has been in the situation, nor will it be the last. Since elementary school, Roman Tate has been stepping on stage into new characters every year, and there’s nothing else he’d rather do.
Growing love for the arts
From a young age, Tate knew he wanted to act and had a love for the arts. When he was in kindergarten, he was a part of his school’s production of “Rindercella,” a rip-off of Cinderella production. This small role was his first exposure to the stage though, and it sparked a love within him that would last a while.

After this small introduction, Tate continued to grow a love for the arts.

“In third grade, my parents were like, ‘There’s this show. You should audition,'” Tate said.

Tate’s parents encouraged him to audition for shows at theaters in the Kentuckiana area, which led him to audition and participate in multiple shows at places like Derby Dinner Playhouse in Clarksville, Indiana and the Kentucky Center for the Performing Arts. His first show at Derby Dinner was “Bonnie and Clyde.” He then went on to perform in their productions of “A Christmas Carol,” where he played young Scrooge, and later in “Oklahoma.”

Tate also performed in the Actors Theatre production of “James and the Giant Peach” where he played the title character, James, at the end of seventh grade.
Time at YPAS
Tate went to Meyzeek for the first year and a half of middle school, but went to being homeschooled about halfway through seventh grade.

“In sixth grade I was looking at different high schools and I’m like, there’s a youth performing arts school! That sounds awesome. So I kept working to try to be able to go here. And I auditioned, and when I got in I was like ‘Yes!'” Tate said.

He would go on to join his two older brothers who had already been attending the school, Dylan Tate (MST) and Ethan Tate (HSU, 12).

His step into YPAS was no normal step though, as Tate already had a musical lined up to be in, the fall production of Legally Blonde.

“I heard about the auditions and thought, ‘yeah I’ll go do that.’ It was after YPAS auditions already happened, and then my voice teacher really wanted me to go to YPAS, so we got a song and we went in. We had the dance all ready, and then I got called back for it, and then I got into it. There was one other freshman with me,” Tate said.

After “Legally Blonde” though, he didn’t stop with the productions. Tate went on to be in “Our Home” where he played a younger boy and was offered the role by his drama teacher. He then also went on to be in “Peter and the Starcatcher,” meaning he was in the three major productions of his freshman year.

As a sophomore, he was Cast B’s Sky in the fall production of “Mamma Mia!” 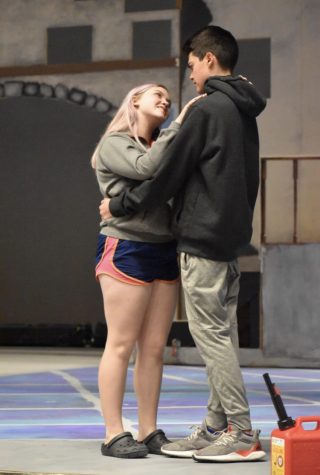 Outside of performing at YPAS, Tate has done local acting work around Louisville, including being part of Daniel Domine’s ghost walk around Old Louisville in October.
Balancing school, acting and free time
Although Tate dedicates a significant amount of time to acting, he is also a dedicated student who is taking both YPAS and MST classes. His parents are both accountants which has given him useful financial and life skills, and they have given him the drive to pursue harder math courses.

“[My parents] were always like, ‘yeah you’ve gotta keep your academics up. If you get a B or a C… we may disown you,'” Tate said. “And I never really cared about sports because that took away from your academics.”

With a supporting household, Tate is able to maintain a balance between acting and his academics, and when it comes to a social life, Tate enjoys just relaxing and hanging out with friends during his off-time between shows.

“With my free time, I’m just doing stuff for school or practicing,” Tate said. “I tried to take up sports. I most recently tried to take up tennis not too long ago, but I stopped it. Then I got into badminton, and then I stopped that. I just have to find a new thing.”

As for the future, Tate doesn’t know if he’ll pursue a career in the performing arts.

“I’m not sure that I want to pursue a job in musical theater because I know it’s very unstable, but I want a job that has a more fundamental base of how much money you’re going to get,” Tate said. “I want to try and major in psychology or something like that. If I can go to a school and get a scholarship for the arts, then maybe I can make it.”

Regardless as to what he does with his career in the future, Tate still plans on being in as many productions as he can be in while at YPAS and potentially beyond high school. He is currently set to be in “Tartuffe,” which will begin production in April.

As he takes his final bow next to his co-stars, Roman hears the audience clap in undeniable approval of the show and the actors next to and behind him on stage. He takes in the last moments before the curtain closes and the performance is officially done.  To some it may seem terrifying and exhausting to put themselves up on a stage to sing, dance and act their heart out, but to Roman, it’s like coming home.