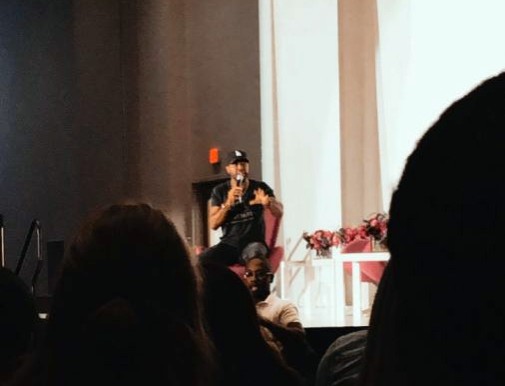 Karamo Brown addresses an audience at the University of Louisville. Photo by Zayne Isom.

Karamo Brown visited the University of Louisville last night to give an inspirational speech about identity and self-appreciation.

Brown, who many students know from Netflix’s hit series, “Queer Eye,” talked about his life and his struggles with his identity. Several times throughout his speech, Brown gave the audience advice and then asked them to repeat the words to a person sitting nearby to enforce his positive messages.

Brown is a three-time Emmy-winner, author and social worker. During his speech, he discussed his life growing up in Texas where people were often taken aback by his name. He discussed how he even when by Jason for a few years to avoid this confusion.

This led into a discussion of the power of language. He talked specifically about the word “marginal” and how, when applied to different parts of his identity, it made him feel less important.

“When someone says you’re part of a marginalized community, they’re saying you don’t deserve access, you’re not going to attain what someone else can attain,” Brown said. “When I look at myself as a black man, as a son of immigrants, as a gay man, I don’t think of any of these things as marginal, I think all of these things as gifts that I’ve been given to create a better life.”

He also talked about the dangers of comparing oneself to others. He gave the audience the advice by telling them that “When it comes to your identity and appreciating and loving every part of you, comparison is the thief of joy.”

He went on to encourage positive self-talk and asked the audience to echo his words; “Don’t practice the negative things that people say.”

Brown talked about his experience as a father, his life on “Queer Eye” and his stance on setting clear boundaries. He talked about the effects of his childhood and abusive father on his love life and gave advice to anyone in a similar situation.

Brown ended his speech by addressing a question about a friendship that he developed with Sean Spicer on “Dancing With the Stars.” He spoke about how his efforts to influence Spicer’s way of thinking reflect the kind of activist that he is.

“I understand that I have a platform and power to walk into a room and influence people’s minds, and so I have always been someone who has fought for LBGT rights, rights of people of color, for women’s rights. I will always be that person,” Brown said.  “If I don’t try and educate them, and no one else tries to educate them, all [Sean Spicer] is gonna do is get back around people with the same point of view and they’re all gonna feel the same way.”

You can watch Brown as the culture expert in “Queer Eye” on Netflix or check out his Podcast, “Karamo,” on Luminary.