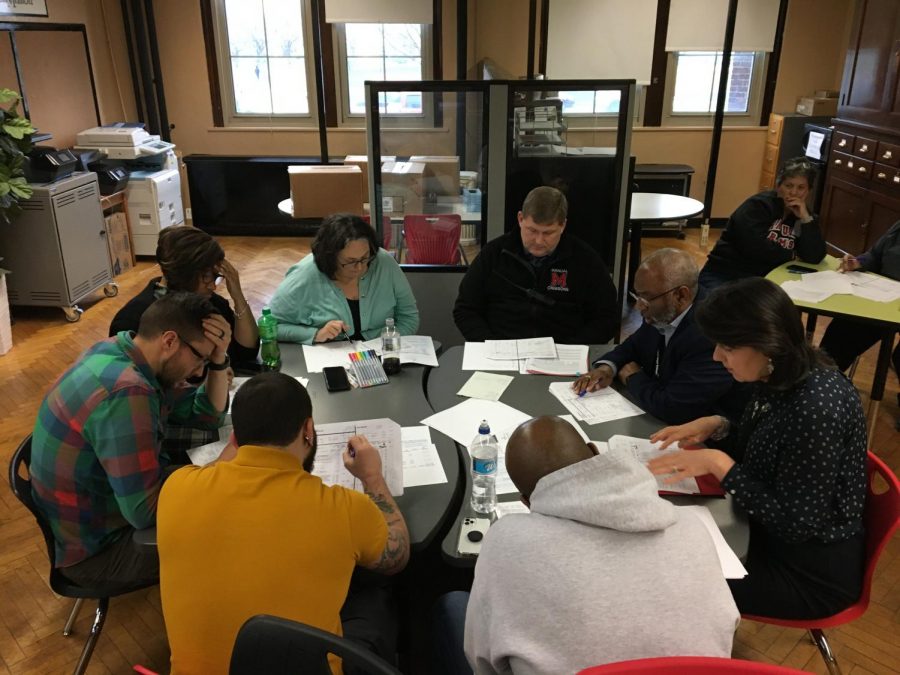 The February budget-focused SBDM Meeting commenced at 3:01 with a full agenda of financial discussions.

After several meetings in which members of the SBDM had questions when they received the monthly expenditures that detail all of the accounts, primarily club or school organization that Manual holds, Ms. Dana Wilson, the bookkeeper, attended this month’s meeting to clarify any questions that the representatives had.

The committee learned that their responsibility was to approve the creation of Fund 22 accounts and to keep an eye on the school-maintained accounts for negative amounts before they are balanced.

However, the council has no responsibility to catch any discrepancies because district auditors will alert Ms. Wilson of them.

Then, Principal Darryl Farmer presented the possibility of Manual housing a Family Resource & Youth Service Center (FRYSC), which would provide resources such as meals, counseling, and school supplies to low-income students.

District policy now allows Manual to apply for the FRYSC because of its 22% free and reduced lunch population.

The FRYSC will cost zero dollars from their own budget for the school to install, including staff, but there was a concern in the council for where it would be located.

Principal Farmer proposed two locations: Ms. Moore’s room and the PTSA room. Ms. Moore’s room would be divided in half, as it previously was before renovations, if it was selected for the location. This would require contractors to build a wall in the room.

“My goal is to make the FRYSC successful,” Farmer said when encouraging members to put their input into reviewing the school’s application.

Mr. Farmer is addressing concerns about space in the building. He has instructed contractors to reconstruct a wall that they previously took down in Ms. Moore's room to give Manual another individual room, a possible space for the FRYSC or another classroom.

After department chairs met separately with Ms. Lete, she worked with the budget committee to follow district procedures to map out the budget.

As Manual has a predicted drop in enrollment, the site-based allocation will be less for the school. Ms. Lete explained various large changes, such as losing an autistic classroom and the soon graduating hearing-impaired and deaf students resulting in less funding for ECE students.

Manual dissipated one classroom for autistic students (5 teachers remain), and many hearing impaired students will graduate this year, decreasing district funding for both units.

Manual allocated its Extended School Services (ESS) fund for assisting students in out of school teaching towards the summer programs that Manual will widen to sophomores as well as incoming freshman.

Every year Manual is allotted money for its Gifted and Talented students. This budget season the school received $800 that will go towards upgrading the Career and Counseling Office so that college presentations can seat up to thirty students.

However, Mr. Christopher Applegate (Science) questioned the request that the office made for a Smart TV so college representatives could give multimedia presentations.

“There’s no purpose to have such expensive equipment,” Applegate said.

Several council members are hesitant to approve funding for a smart TV in the room. Mr. Applegate said that there's no reason to spend thousands of dollars on a piece of equipment that will display PowerPoints. Instead, he suggested supplying a projector.

After discussing the Manual budget, Assistant Principal Brian Crady explained the changes, or rather lack of them, that the YPAS budget experienced.

YPAS has received $45,409 every fiscal year for many years, but the accounts within the budgets have changed. The school moved more money into their technology fund as they replace the 68 computers in the building over time.

Then, the council reviewed the flex spending budget, which will have a significant increase in the paper/toner budget despite teachers now being provided only two boxes of paper every semester, beginning in the 2020-21 school year.

Manual has already spent over $20,000 on paper and toner this year (and they only budgeted for that amount), a significant increase from previous years. Teachers will be limited to two boxes of paper per semester next year. @Turnitin and similar services cost $16,000.

As well, the budget added more funds to the ESS account to provide for 30 new TI-84 calculators and a Chromebook cart so that students may check out the resources if they don’t have access to them.

They proposed selling an administrator, such as an Assistant Principal, to swap in for a mental health counselor.

A few SBDM members questioned Manual's recent addition of a fourth assistant principal at the beginning of the school year, saying funds for that salary could be used to supply a "needed" second mental health counselor. They are asking the committee to revisit that decision.

“The budget is tight, but we’ll do the best we can,” Farmer said.

The SBDM Council called a special meeting on Feb. 17 to finish the budget discussion.

The meeting adjourns at 4:35. On Monday, Feb. 17, there will be a special called meeting to finalize the budget.

The meeting adjourned at 4:36, leaving the budget discussion largely unresolved.