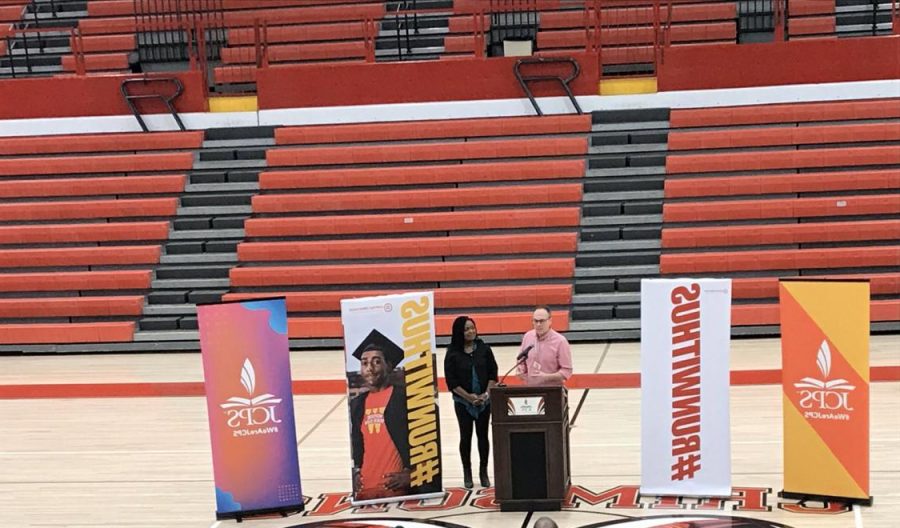 The Louisville Urban League hosted a press conference in Manual’s gym this past Monday in regards to an ongoing project to build an indoor and outdoor sports and learning complex for track and field in the West End of Louisville.

The facility plans to open in January 2021 and will include an indoor and outdoor track as well as areas for all other field events to take place.

During the conference, Reynolds thanked the Manual alumni class of 1976 for their participation in the project, with the class donating $10,700 during the conference itself. She also thanked JCPS administrators for their participation, and Tim Holman, Manual’s track and field head cross country coach, for giving her the opportunity to attend a cross country meet, opening her up to many more donations for the project. Currently, the project is searching for $12 million more dollars in donations.

“This is about transforming the community in a way that I don’t think many people understand,” Reynolds said.

This is regarding one of the project’s many goals: to clean up the West End. The sports and learning facility will take up 24 acres of contaminated land and will welcome all JCPS schools to use for practice, meets and other events.

“The West End is an area that has been neglected for many, many years,” Dr. Marty Pollio, Superintendent of JCPS, said at the conference. “Bringing in an athletics facility that will attract people to come to West Louisville and attracting businesses around it is going to be progress.”

Dr. Pollio explained his goal to continue to be committed to fixing JCPS facilities in the West End, including Shawnee High School, whose third floor has been condemned for over 25 years.

“I’m excited about young people being able to get their gold medals in their own community,” Reynolds said.

In the past, track and field teams across Louisville have traveled to surrounding cities and states to compete in indoor competitions due to the lack of a facility in the local area. This project will change that — allowing all levels of events to compete indoors.

Along with the Urban League, Dr. Pollio is determined to draw more attention to track and field as a whole.

“We’re going to have a facility for a sport that has been neglected nationwide, but definitely in Jefferson County for many years,” he explained. “We have kids running hallways and on tracks that are falling apart outside. Now, they are going to have the opportunity to run on professional tracks, and not have to travel to other cities to do that.”

Not only will this facility provide places for meets, but for practices as well. With the cold and rainy weather Kentucky winters bring, many track and field teams across JCPS are forced to cancel practice or run in the hallways of their school.

“The adjustments that we’ve had to make to our schedule at Manual have been really hard,” Michael Morgan (12, HSU) said about practicing inside when the weather is too cold for outdoor practice. “With the renovations going on, it’s been really tough running through the hallways and having to weave in and out of teachers and construction workers.”

Morgan, being a senior this year, will not be able to use the facility as a part of Manual’s team, but is very excited to see the benefits that it brings to the runners following him.

“It’s one of those [sports] that has the best grades, lowest truancy percentage; all these wonderful things that we’re looking for,” Reynolds said. “You don’t need a lot of money to be great at track, you just need shoes and determination.”

“Getting the opportunity to compete in a sport that I love as well as doing it with the best coaches and the best teammates in the city shows how track is so special,” Morgan said

Reynolds is very appreciative of all donations already given towards the project but urges for more corporate participation.

“Corporations in Louisville need to do better,” she explained. “If we took away the $5 million that Norton has invested in this project, 4% of the remaining funds represent corporate participation. If it weren’t for individuals and foundations, I don’t know where we’d be.”

Although fighting for more corporate support, Reynolds is determined to get this facility finished and open for the public.

“We have to demand it, even of ourselves. These young people are leading us,” she said. “There’s a reason it took 40 years to build bridges, we will not take 40 years to build this. We will be open by January 2021.”

To learn more about the project, or help support the efforts, visit sportsandlearningcomplex.org.