Crimsons fall to the Bulldogs 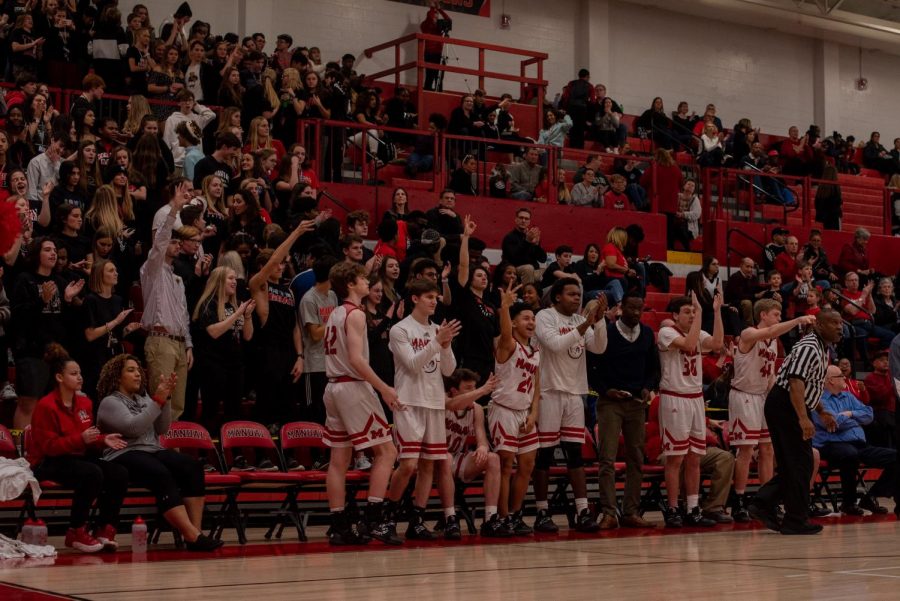 Fans and teammates cheer on the team during the homecoming game against Central. Photo by Cesca Campisano.

First half:
Within the first four minutes, Male set the tone of the rest of the game by going on a 14-2 run before Manual called their first timeout. Manual’s first four points came from junior, Brendan Shene (#32), in his attempt to end the run.

To go along with the 14-2 run, Male submerged Manual’s ball handlers with tremendous amounts of pressure causing Manual to commit six turnovers in the first quarter alone.

With Male’s play, the score after the first quarter was 28-12 with Male in the lead.

In the first half, the level of intensity and the raised emotions were apparent from the two seventh regional rivals as both teams committed 10 fouls a piece, which lead to a double bonus for both teams.

To end the first half, Manual trailed Male 52-25. At the half, the leading scorer for Male was senior guard, Cameron Pope (#3), with 11 points, and Manual’s leading scorer was junior forward, Brendan Shene (#32), with only six points, four of witch followed Male’s 14-2 run in the first quarter.

To end the first half Male leads Manual 52-25. pic.twitter.com/el3cVwPbCw

Second half:
Though Manual handled the ball more efficiently in the second half with only four total turnovers compared to six in the first quarter, the adjustments weren’t enough.

Due to Male’s large lead against Manual, there was a running clock for the remainder of the game with 5:05 left of play in the third quarter.

The final outcome of the game was Male winning with a score of 88-52.

Male was led by senior, Tyren Moore (#5), with 19 points, whereas Manual’s Shene continued to lead Manual on the box score with 11 points.

Manual’s next game will be an away game against Pleasure Ridge Park High School. The game is scheduled for next Tuesday at 7:30.