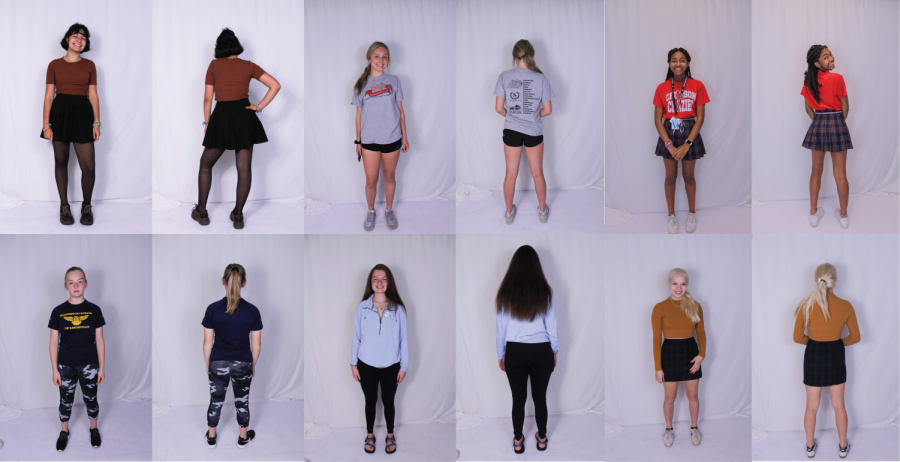 Manual RedEye staff members pose in outfits that they might consider to be pushing the limits of the dress code.

This week, Manual’s Culture and Climate Committee released a survey aimed at getting the perspectives of all stakeholders on the topic of “appropriate school attire.”

Manual’s administration wants to hear from you as they overhaul the dress code policy. Fill out the form below to share your thoughts:https://t.co/mLQOriBJnB

However, despite the well-intended efforts of inclusivity and stakeholder involvement, this survey has failed at what it aimed to do. In its current state, it is an embarrassing attempt at reaching stakeholders and we can’t help but feel that the committee didn’t take into account the current issues that students, teachers and parents have with the current dress code. Instead, it appears to take an already broken system and break it even more.

From the perspective of students, the dress code is inconsistently enforced. While some teachers and administrators strictly enforce the dress code, many are more lenient and some do not bother with it at all. The dress code ultimately loses meaning when it’s a “sometimes” practice.

Before this entire survey, the dress code was a topic of contempt between the student body and the school. Many of the rules appear to be targeted only toward girls, including policies such as “[s]horts, skirts, and dresses must extend to approximately 1/3 of thigh length.”

Although not a Manual-specific issue, dress codes typically seem to single out females, yet one could argue that the language applies to boys as well. For the most part, however, male students usually won’t wear “form-fitting bottoms,” shirts with deep necklines, skirts, shorts or dresses shorter than ⅓ of the thigh or spaghetti straps. Until male leggings and tank tops are mainstream styles, the dress code is undeniably misogynistic.

These concerns have been discussion points within the student body and between students and teachers for quite a while, and it was disappointing to see that the survey not only neglected to address them but intensified the division.

Early this school year, the School-Based Decision Making (SBDM) Council conducted a thorough Racial Equity Analysis Protocol (REAP) on the dress code policy, which is standard procedure for all school policies. The council came to a decision that the policy unfairly targets women and students of color.

After the initial REAP, Manual’s SBDM tasked the Culture and Climate Committee with investigating the policy to form a new one that took input from all stakeholders. In the month of September, the committee began discussions on a dress code overhaul.

Mr. Farmer said that an SBDM committee will be formed as soon as possible which will be tasked with reforming the dress code. The committee will bring their suggestions to the full SBDM at a future meeting.

In November’s SBDM meeting, Assistant Principal Paula Boggs reappeared with an update on the committee. They had completed another REAP, then decided that a survey would be a guaranteed method of reaching all stakeholders and began the process of creating said survey. The survey would be published for one month, after which, they would go over the data and form a new dress code policy. Manual’s SBDM would have the final ability to edit, approve or reject the proposal.

Four months later, at the February SBDM meeting, council members found themselves questioning the status of the dress code committee and asked Principal Darryl Farmer for an update on their progress. Mr. Farmer said that the committee would release the survey soon.

Dress code has been mentioned once again. Mr. Farmer said the culture and climate committee is almost finished with their research but SBDM members emphasized the importance of getting it figured out before Manual’s proms.

We found that the committee meetings are not open to the public, to teachers or to students after meeting with Mr. Farmer. In that case, allowing input from all stakeholders in an equitable and transparent way becomes even more important.

Despite the issues with the dress code and the confusion surrounding the transparency of the committee meetings, it’s also apparent that the survey itself was a poor decision.

First of all, the questions were poorly written, copied and pasted from the current dress code policy, unless it was the more specific question about “bandannas” and “du rags” [sic] which appears to mainly impact the African American student population.

Ms. Boggs made it clear that the history surrounding bandanas and du-rags made them a point of concern for the committee, especially when considering student safety for identification purposes and for walking between buildings in Old Louisville where students could be mistakenly identified as wearing gang attire. However, the question appeared on the survey because of the cultural fashion shift where students are reshaping that history. It was in no way meant to target a specific racial group, according to Ms. Boggs.

Secondly, the pictures inside the survey are both insensitive and disappointing. Question five features a female student wearing a skirt where her underwear is exposed, something that obviously wouldn’t be appropriate ‘school attire’. It’s easily possible to wear similar clothes that don’t display undergarments, making this question biased and out of touch with what students would actually wear. It also features only white students.

Ms. Boggs said the committee’s ultimate goal was “to be diverse” and feature pictures with all different body types, genders and races. “Although it wasn’t as clear as we might have wanted, we truly attempted to be diverse,” Ms. Boggs said.

Question three reintroduces the discussion of shirt strap width, one of the more common criticisms of Manual’s dress code. Instead of examining the necessity of a policy that inherently sexualizes a student’s shoulders, the question asks respondents to determine which “straps” are appropriate. There’s no automatic difference between the rest of a shirt with a one-inch strap and a four-inch strap; the only real difference is the amount of shoulder that is exposed.

I think history will show that majority rule doesn’t necessarily come down on the side of racial or gender equity, both of which are questionably addressed in the poorly crafted survey. /1 https://t.co/B14y7kWTh6

Regardless of the student and staff participation in the dress code committee, it seems that many of the common complaints and criticisms were not addressed. Perhaps this was because of the lack of transparency surrounding the discussions, or maybe because students with genuine concerns had no place to voice them.

Further, the survey’s efforts to be representative and inclusive fell extremely short. Only Manual staff and parents received the original email with the link, and discussion surrounding the survey started after Manual RedEye posted the link on our social media platforms.

If Manual had sought out public distribution of the survey to both parents and students rather than relying on School Messenger which only delivered the link to parents with an email on file, and prioritized transparency pertaining to a dress code overhaul, many of the student and parent concerns could have been tackled.

“I apologize that the context isn’t out there [for the survey],” Ms. Boggs said. Further, she recognized that without context, the survey could be “misinterpreted” and that creating room for people “to develop their own context […] allows a storm of trouble.”

Ms. Boggs also met with a group of students wanting to discuss the dress code on both Monday and Tuesday. In those meeting, students discussed some of the issues with the survey and provided suggestions to Manual’s administration on how to improve it. This is a great first step.

It’s worth noting that, as a courtesy, Manual RedEye sent Manual’s administration an early version of this editorial on Sunday and that same day, scheduled a meeting with Mr. Farmer and Ms. Boggs for Tuesday morning. We are excited to see that progress continues to be made to make the dress code equitable and the context for the survey transparent, especially by allowing students to have more proportionate representation in the discussions this week as compared to the overwhelming amount of adults on the Culture and Climate Committee.

In the end, we’re disappointed with the survey because it doesn’t match the forward-thinking, resilient, Manual way. A public forum that would allow parents, students and teachers to speak would be more effective at collecting the information that the committee was originally seeking out.

During the principal search in 2018, Manual’s PTSA hosted a forum where students and parents could hear from two finalists for the position and ask them questions. In many ways, the dress code has a much bigger effect on the day-to-day lives of Manual students, so a similar event would be justified.

It’s clear that Manual is striving to make progress towards an equitable, representative dress code. While the survey may not have accomplished their original intentions, their attempts at rectifying the lack of student voice, providing clarity and context make us hopeful that there will, eventually, be a fair and progressive dress code.

The last question of the survey was a comment box for the survey-taker to write whatever they feel is necessary. We hope this serves as our answer to that last question, and above all else, provides our voice, opinion and assistance in the creation of the new policy.