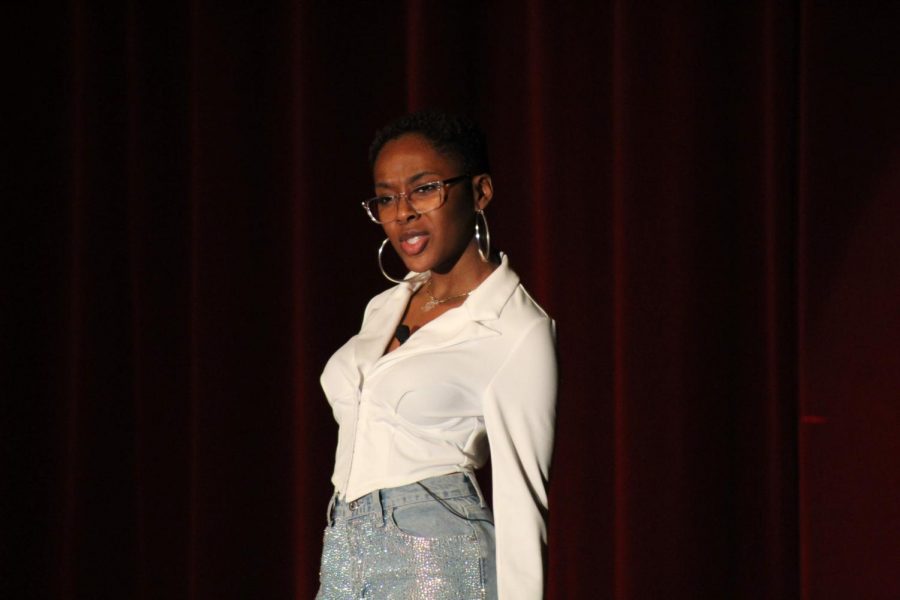 Faith Lindsey (11, J&C) engages with the crowd as she performs her chosen poem. Photo by Molly Gregory.

This story was made with contributions from LaNasia Mason (10, J&C).

On Feb. 21, Manual hosted its annual Black History Month program. The program held auditions throughout January and February, open to students as long as they had a black-history-related story to tell.

Anchored Roots was the theme for this year to show “the struggle for us black people to survive and make it here and prosper. You can’t say we’re not anchored,” Mrs. Nicole Finley, director of Anchored Roots, said.

The programs took place in shifts due to lack of space in the YPAS mainstage. Program A, which students with second block classes on the first, third or fourth floor attended, had fewer performances due to scheduling issues and student absences, but there was still a lot of talent showcased during the show.

Program B was full of dance numbers and musical solos as well as speeches and spoken word. Students who had second block classes on the second floor of Manual and in the YPAS annex attended program B.

The program included acts from Manual students and outsiders alike. For example, a 10-year-old aspiring rapper (or teacher, added emcee Henry Escobar (12, J&C)) delivered an energetic performance that had the whole crowd on their feet. On the other hand, plenty of Manual students performed spoken word, passionate gospel music and dance numbers.

Escobar, this year’s emcee, enjoyed being a part of the ceremony.

“It was great. I got thrown a lot of information that was new to me because I am Cuban, and that’s my background, but overall I learned a lot about black history,” he said.

Early in the show, the Melodic Melanin Gospel Choir graced the stage with “I’ll love you forever” with  Eric Dickerson (10th, YPAS) leading the choir.

“Doing that was a lot of fun– a great chance to showcase my culture, and it felt good because I felt like I was doing my part to spread black awareness,” Dickerson said.

“For me it was a very important experience. It was motivating, and I wanted to take advantage of the opportunity to provide a part of culture that the black communities roots were grounded in,” Amarriah Russell (11, YPAS), director of Melodic Melanin gospel choir, said.

With the Black History month program being an annual event, each year is different.

This year consisted of more spoken word pieces, “all which were original except one. All from the students’ heart and experience here at Manual,” Mrs. Finely said

They showcased what African Americans do in so many different ways. They even had the Manual Dreamers take the stage and step in honor of the struggle and fight they took to make it this far.

“Being able to step made me feel like I was giving back to the African American community and that I was actually doing something beneficial for it,” Demi Handley (10, YPAS) said.

For photos documenting Program B, see below.