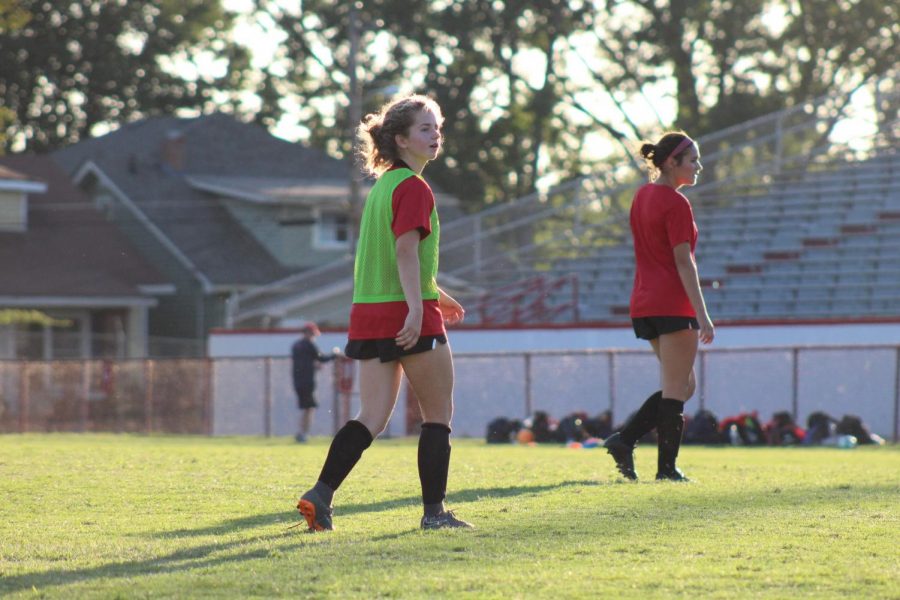 Julia Werner (11, HSU) warms up for the day's match. Photo by Molly Gregory.

On Feb. 12, Mr. Zuberer hired Diego Romero as the Manual girls’ Soccer (MGS) head coach. The MGS executive committee was in agreement with his decision.

At the end of last season, Sheri Kiser, the former head coach, resigned to take an administrative job at Portland Elementary School. In suit, the assistant coach and JV coach she hired also stepped down. For more information, read about MGS’s search for a coach here.

Diego Romero was a coach for Colorado Pride Soccer prior to taking the job as head coach.

“Moving from Colorado was a big decision. I was sad to leave my last job. I coached there for over six years. I was able to learn from very good coaches, and it made me grow as a person and coach,” Romero said.

Manual’s prestigious reputation was what attracted the new coach.

“The culture of the school and athletic programs were the main reason [I wanted to be Manual’s coach],” Romero said.

He has plans to introduce a dynamic practice plan to MGS.

“I believe that soccer is a game that should be played with skill and creativity. Teams should always attempt to play a possession-style game that affords the players that chance to play with the ball at their feet,” he said.

The team is enthusiastic about the new hire.

“I’m excited for the new coach, and while obviously no one could replace Sheri, I think as an almost new-starting team, we will be able to go out there, repeat our success and hopefully bring home a state trophy,” Leah Greenberg (10, HSU), a forward for the varsity team, said.

While some team members are feeling confident about the season to come, others are apprehensive, yet hopeful.

“I’m really nervous about it, to be honest. Losing our seniors is already going to be so hard, considering almost all of them are starters,” Francis Curtis (10, HSU), a double-rostered defender said. “I’m really hopeful, though, I’ve heard really good things [about the new coach] so I look forward to his new coaching style and how he can help us grow. It’ll definitely be a learning process for all of us, but I’m excited to see what new experiences come with these next two years.”

“I’m sad about our old coaching staff leaving, but I’m excited for a new chapter. I’m looking forward to learning and growing with my team and hoping for an exciting senior season!” Julia Werner (11, HSU) said.

The girls’ soccer team will have the chance to meet their new coach on Monday, March 9 at a parent meeting. Anyone interested in joining the team is encouraged to attend, and it will serve doubly as an orientation meeting.

The varsity team ended their 2019 season with a win-loss record of 11-5 and is hoping to further improve their record next year.