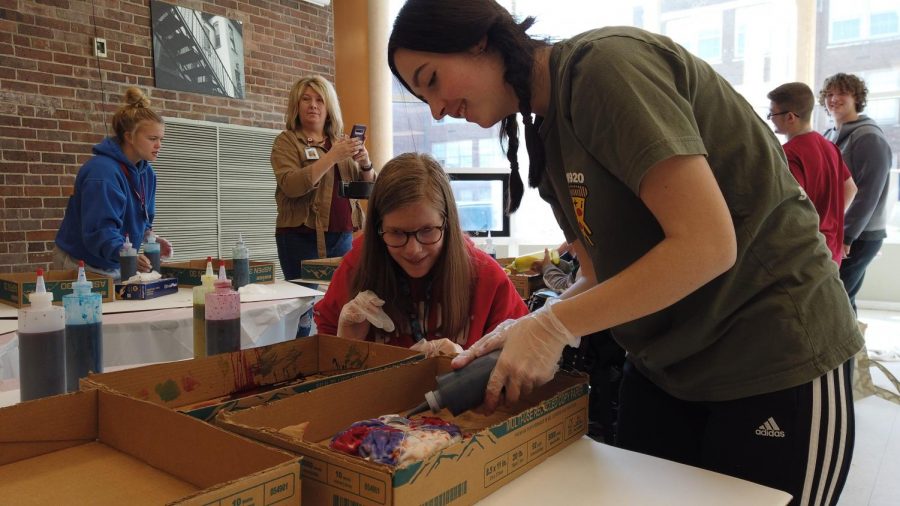 Buddies work together to tie-dye a T-shirt.

This piece was submitted by Marilyn Buente (11, VA).

During Wednesday’s meeting, students enjoyed Valentine’s Day themed snacks, such as cupcakes, cookies, pizza and other treats while waiting for their turn to tie-dye Best Buddies T-shirts.

Best Buddies is an international organization with the mission of building friendships between special needs students and the rest of the student population.

“This club is a great way to make friends so that you can wave to your buddies in the halls and make friends beyond the classroom,” Ada Weiss (9, HSU) said.

Loud music accompanied the sounds of students laughing as they caught up with their buddies, many of whom met each other through the club.

Most tables were packed with excited students, and the room was filled with lots of movement as some students prepared to tie-dye and others danced and laughed with one another.

The club’s advisors were at the front of the senior cafeteria, preparing the T-shirts for dying.

For many students, the club has helped to foster friendships within and outside of the club that have the potential to last throughout high school and beyond.

“Our buddies go up to tie-dye first,” Rachel Isaac (10, MST) said. “We’re going up after they’ve finished, but for now, we’re eating pizza!”

The first group of students haphazardly tie-dyed their shirts with the bottles of dye the club officers and sponsors prepared.

Some students stood next to and assisted their buddies while others worked on their wearable masterpieces alone.

As the meeting came to a close, the students collected their shirts, threw away their plates, and said goodbye to their buddies.

For more information on Best Buddies, check out their website.