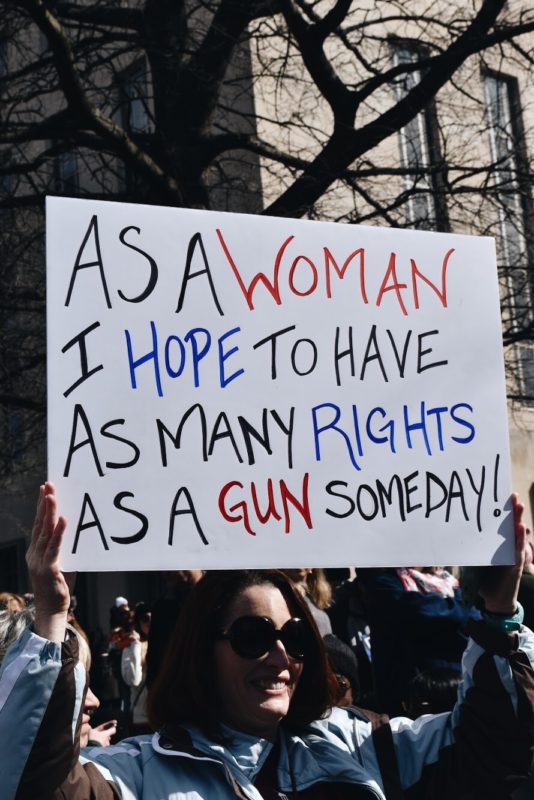 While intersectionality was not the focus of the march, speakers and protesters incorporated women's rights issues, the Black Lives Matter movement and LGBTQ+ rights. Photo by Piper Hansen.

Women’s history is very rich with powerful women and groups who advocate for equality. With this said, it is merely impossible to compile a list of every milestone. Though, the following dates, events and women are notable staples in women’s history.
Before 1900:
859: During the 9th century, Fatima al-Fihri of Morocco found the oldest university, currently the University of Al Qarawiyyin.

1553: Mary I, daughter of Henry VIII becomes the first ruling queen of England.

1769: Women of the colonies are deemed not allowed to own property.

May 31, 1776: Abigail Adams’ letter to her husband, John Adams advocating for the representation of women and future activism.

1830: During the Industrial Revolution, family dynamics began to shift as women were now seen as an important part of factory labor.

July 19-20, 1848: The first known organized women’s rights event is known as the Seneca Falls Convention, with contributors such as Elizabeth Cady Stanton and Lucretia Mott.

1866: Elizabeth Cady Stanton becomes the first woman to run for the U.S. House of Representatives.

May 15, 1869: The National Woman Suffrage Association is founded.

October 16, 1916: The first birth control clinic in the United States is opened by Margaret Sanger and then claimed as illegal.

August 18, 1920: The 19th amendment is ratified giving women in the United States the right to vote.

1923: Only one family member per household is allowed to work due to the National Recovery Acts.

June 21, 1946: The Commission on the Status of Women is organized to advocate for women equality.

Dec. 1, 1955: Rosa Parks refuses to give up her bus seat to a white man, which helps spark the civil rights movement.

May 9, 1960: Food and Drug Administration (FDA) allows the birth control pill to be distributed.

1963: The Equal Pay Act is established and set standards of the continuous movement of equal pay for women.

1969: Women are now able to file for divorce with consensual consent from their partner.

Dec. 18, 1979: The United Nations implements the Women’s Bill of Rights pushing to end discrimination against women.

In honor of #WomensHistoryMonth, we’re sharing just a few of the women who have shaped our history as a space agency. 👩‍🚀 Today, we’re starting with the first American woman in space: Sally Ride. 🚀 pic.twitter.com/7aKv46ILne

1992: This year is declared as the “Year of the Woman” after various sexual harassment cases regarding U.S. government officials.

In 2018, America sent a historic number of women to Washington. Now, their vision & leadership is building a brighter future for women & girls all across the country. #WomensHistoryMonth pic.twitter.com/dUQqKOna7m

2012: The Paycheck Fairness Act is established to instill the protection of women’s wages.

2013: The U.S. government abolishes the law against women not being able to have a combat position in the military.

Jan. 21, 2017: The first Women’s March is held at the capital, Washington D.C., which is compiled of activists who support feminist movements.