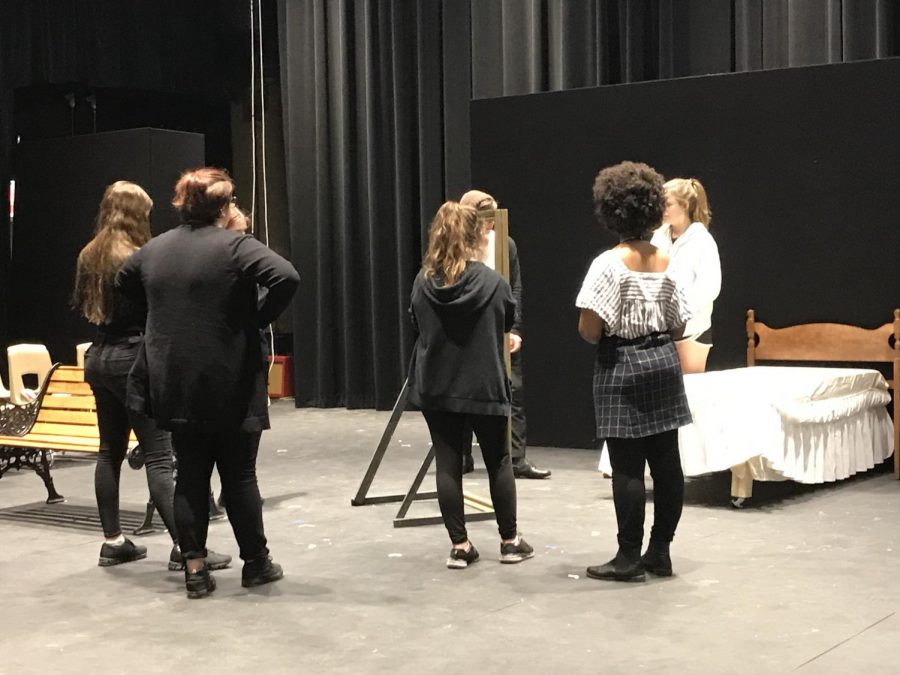 Design and Production team conducting a "spiking" session, where they organize sets and props for New Works. Photo by Tyler Lericos

The Youth Performing Arts School (YPAS) Theater classes and Design and Production classes had their rehearsals and preparations for their upcoming yearly performance, New Works, for next week. New Works is basically a show where Manual students from different magnets come together to write, direct, act in and design a dozen or more short plays that are showcased together as a series of plays.

Mr. Hinds (Theater) and Ms. Groseth (Design and Production) are two out of the several teachers that helped supervise and organize New Works.

New Works is an annual show YPAS puts on, and many student YPAS majors love participating in it. Not only is it a great opportunity for YPAS students but also incoming freshmen who often have a hard time when it comes to getting into bigger shows.

“What’s great about it is they get to work on it every year,” Hinds said. “It’s often the first time that the freshmen really get to jump into what goes on here at YPAS. It’s harder to get into things as a freshman here, but by the time New Works rolls around in the spring, we need a lot of actors.”

The show is not only limited to YPAS majors. Students from other magnets are encouraged to write plays and act in the performances.

Sebastian Brightwell is a senior in HSU who takes MR. Hinds’ playwriting class. He contributed a piece of his work to the New Works show as a playwright.

“I have been in playwriting since sophomore year and directing my junior and senior year,” Brightwell said. “ YPAS has just allowed me to explore theater and explore different realities.”

Jimmy Martinez is a freshman in Mr. Hinds’ Theater class, who is an actor for the upcoming New Works production. He has found New Works to be a comforting part of YPAS.

“It’s just really comforting to be here,” he said. “I feel very stress-relieved, especially with all the stuff that happens at Manual. I come over here and just decompress and relax.”

With all the moving parts including the YPAS dancers, playwrights, actors, directors, singers, composers and musicians, all of the organization goes to Stage Manager, Abigail Nash (12, YPAS), who runs all the sets and props arrangements.

“It means I’m in charge of the communication between the design team and the directors,” Nash said. “Making sure that the directors have everything they want by completely understanding their plays and what they need and how it’s going to run and then communicating that to the designers.”

Nash is in charge of giving the cues to the design team and actors during the New Works show. There are over a dozen shows according to Mr. Hinds, and Nash has to manage all the props and sets for each of them during the show.

“I thought it would be overwhelming,” Nash said. “But I think because I thought that, I prepared so much that it really hasn’t been overwhelming. There was a lot of paperwork that goes along with it, but I’ve really developed my organization skills and hasn’t been that stressful.”

If you want to go see New Works, tickets cost $10 for adults and $8 for students and seniors. You can buy them here.