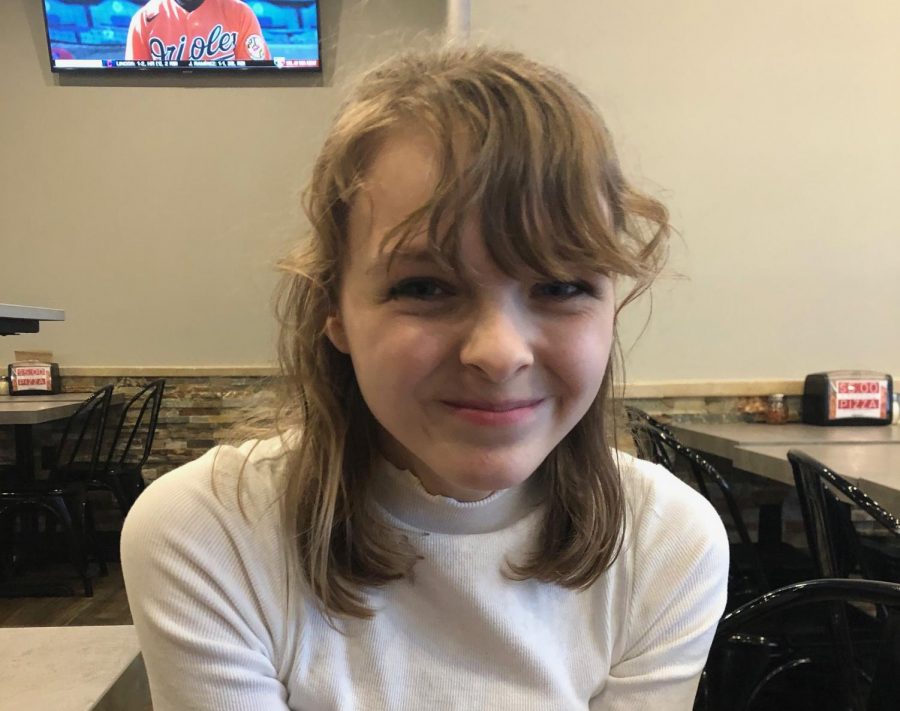 It’s a cold and rainy Monday. Molly Kay Greenwell (J&C), a ninth-grader at Manual, hustles into Quills Coffee Shop. She strolls to the counter and orders a small hot chocolate to shake off the cold. The barista compliments her sweater and Greenwell beams in return, accepting the compliment graciously. She has a style of her own and has always liked it that way.

“I’ve always been a very creative kid, and that’s sort of what I identify myself with now, like, writing, and theater, and art, and music,” she said.

She hasn’t had time for theatre lately, juggling schoolwork and her very own magazine. Greenwell runs a Broadway review magazine called “Curtain Call”.

“One night I tweeted out, ‘Hey, does anybody want to start a Broadway blog with me?’ and I got a bunch of people together, and we were like, ‘You know what? We can make this something more,’” Greenwell recalled.

The online magazine progressed quickly. The founder obtained press passes to Broadway Con in New York simply by contacting the press liaisons and requesting free tickets for her and her team. Soon enough, she was flying out to New York to see Broadway stars that she had long admired perform.

Greenwell fell madly in love with Broadway through “Hamilton” in February 2016. Ever since then, she has had a passion for exploring and experiencing musicals she finds worthy. One of these is called “Spring Awakening”, a pop-rock musical about kids in 1800s Germany realizing their identities and coming to terms with themselves. She admires it because it deals with LGBT issues and mental illness.

Curtain Call’s website is mostly news while the magazine is mostly opinion. During Pride Month, each writer wrote about an LGBT musical that inspired them. Greenwell wrote about “The Prom”, which was the first musical she saw on Broadway. To her, diversity and inclusivity are vital parts of her publication. She wants everyone’s story to be heard.

“We have a lot of guest writers because if we don’t have the person on our team to tell ‘that’ story, we will find someone who can,” Greenwell said. “We find a lot of writers of color, a lot of LGBT writers who have different opinions than us, so we can get their opinions on stuff that is going on.”

Despite being the founder, Greenwell is the youngest writer on her team. The writers on her staff range from high-school to mid-college age. She works very closely with her magazine’s directors, Maddie White and Constance Drugott, who she credits as being the publication’s true leaders.

Though Greenwell is an avid writer and is dedicated to her work, Curtain Call isn’t all of who she is. She’s self-aware and self-assured. She attended Saint Athanasius: a small private middle school. She felt like she was trapped in a mold there. She had to wear a uniform every day, which resulted in her expressing herself as much as possible when she came to Manual.

“I feel like when I look cute, it makes me feel so much better about myself and prepares me to face the day. Getting dressed nicely in the morning is always one thing I can put on my list of things I’ve done today,” Greenwell said.

She loves her school now, seeing as she loves her friends and the classes she’s taking. She’s a Journalism and Communication student at Manual, which gives her a better opportunity to use her voice than anywhere else, and she’s got a big voice to use.

Though Greenwell is brave and bold, she also suffers from anxiety. Her anxiety and sensitivity go hand in hand: when someone says something that makes her anxious, she can’t sleep, she can’t focus, and she can’t get anything done, which is difficult for a girl with so many passions. Greenwell is smart and converts this anxious energy into productivity as much she can, but back in eighth grade, it was more difficult. She had cut her hair short, and the kids at Saint Athanasius threw slurs at her and called her a lesbian. Though Greenwell isn’t a lesbian, she is bisexual, and still identifies as such.

She has evolved since then. At Manual, her friends support her, she is happy, and she is still the spitfire she has always been.

EP Presnell (11, J&C) met Greenwell when Greenwell shadowed Manual as an eighth-grader and the two are now close friends. They clicked almost instantly. “When I first met her, I thought she was, like, an eighth-grader trying to impress us. She made Andrew eat a packet of instant coffee,” Presnell said, recalling the day she introduced Greenwell to her sophomore friends.

“She’s so caring about all of her friends. I think that she can read people very well, she knows when something is wrong and she keeps everything organized within her friendships,” Presnell said.

Cesca Campisano (11, J&C) was also a sophomore the year Greenwell came to shadow. “I only met her this year, because when she shadowed last year I was absent, so I didn’t know who she was. EP and a few of our friends would literally talk about her all the time. I didn’t have any idea who they were talking about and it almost started to annoy me,” Campisano said, “I actually got to know her over the DC trip. She’s a really fun person to be around.”

Greenwell is smiling and receptive as she leaves Quills. She waves goodbye and jogs out to meet her ride. In her wake, Greenwell leaves an aura of determination and positivity. She is one of those people who carries her resolved attitude everywhere she goes, prepared to inspire people and to give voices to those who deserve it. She’s a force of nature: a freshman to watch.