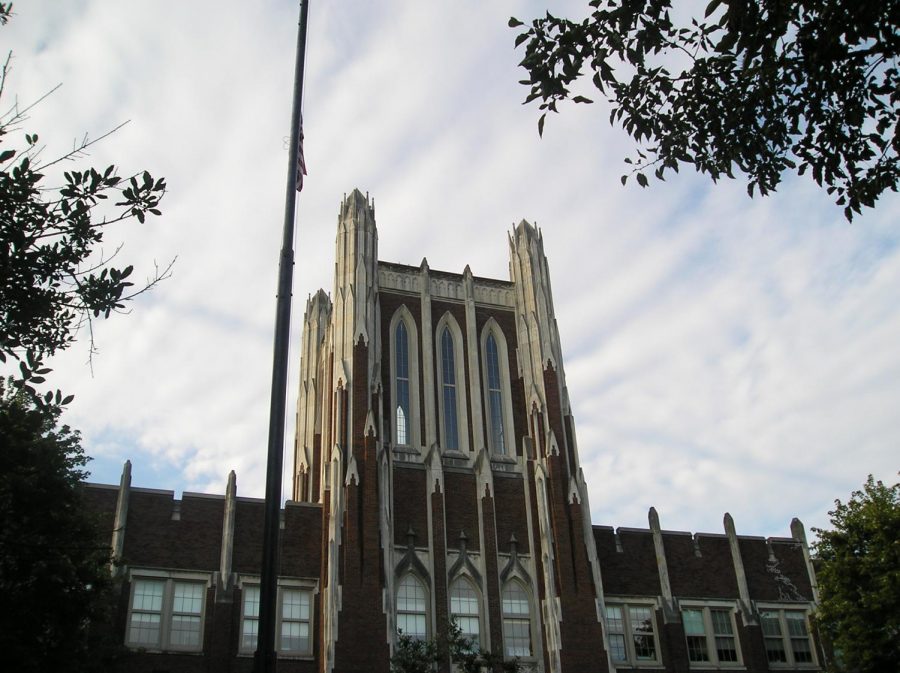 The duPont Manual Tower, the tallest spot at Manual as seen on a fall day before students enter the building.

JCPS Superintendent Marty Pollio announced earlier today that all schools will be closed beginning on Monday, March 16 through spring break, in response to Governor Beshear’s recommendation that all Kentucky public and private schools close to prevent the spread of COVID-19. As of now, students will return to school on April 6.

During the press conference, Pollio said that the first nine days, March 16 to March 26, will currently be treated like snow days, meaning that students will need to make those days up at the end of the school year, making the new last day of school June 10. However, the district will ask the state for a waiver to keep the last day of school as May 28.

Earlier this month, the Kentucky Department of Education announced that they would allow districts to file a non-traditional learning plan for districts that previously didn’t have an agreement with the state.

JCPS does not have that agreement, and according to Pollio, it’s unlikely they will try to make one because of the difficulty some students would have completing work from home, especially online.

However, he did state that students would receive assignments that do not require internet access to be completed while school is out of session.

JCPS also announced a plan to provide food to students in need while out of school. Meals are available at 35 schools and eight mobile locations from 10 a.m. to 1 p.m. Monday through Friday. All students ages 18 or younger are able to get a meal, however, they must be taken to-go.

Here are locations where students can receive a meal while school is out: pic.twitter.com/gfKrYv4Ica

In addition, JCPS will be offering “Blessings in a Backpack” for students to take home over the weekend.

All athletic and academic events are also canceled while JCPS is out of school, and all field trips and after school activities are canceled for Friday.

Tomorrow, students not attending school will receive an excused absence if they or their parents are experiencing health concerns and decide to stay home. However, for this to be considered, students must turn in a parent note when school is back in session.

Beshear stressed the importance of students attending school tomorrow so that they are equipped with information on learning while out of school.

There is a possibility for the closing to extend beyond the two weeks already planned. JCPS plans to monitor the spread of COVID-19 and will make the decision whether or not to extend the break before students are scheduled to return.

This is a developing story.
Student reactions
“It’s pretty surreal to be witnessing this unfold. The impacts of this tragedy are going to be long-lasting and memorable, and I only hope that everyone can be safe and healthy. I think this is an important reminder about how connected our world is and the importance of health, education, and proactiveness,” Elif Ozyurekouglu (12, MST) said.

“The teen in me is happy but in retrospect, we aren’t going to be doing so hot academically after this. Personally, though, I like the thought of choosing when to do homework and being able to do as much as I feel like at home and then being able to do work out on my own time. But it sucks that every social thing is getting canceled or is put on the back burner because of concerns,” Mikayla Huynh (11, HSU) said.

“It is very frustrating. I have college orientation starting at the beginning of June. I hope the days get excused because I could not imagine having such a short summer. It would be a nightmare,” Madison Corrigan (12, MST) said.

“It’s really nerve-wracking, especially considering most of us are gonna be at home for a solid three weeks,” Eva Cardwell (10, VA) said.

“The whole situation is stressful and concerning. It’s not me that I have to worry about, but I have many loved ones who could be seriously impacted by the virus, and it’s also scary that I could unknowingly be a carrier of the coronavirus. And now on top of all the stress we now have to worry about schooling outside of school for three weeks and potentially even longer,” Leah Stewart (10, YPAS) said.

“What happened to our unofficial instructional days? Is that just out the window? Very stupid if you ask me,” Emma Hayes (10, J&C) said.

“I’m a little upset considering all of the events taking place and sports’ season, but I know it’s necessary. and science fair being online is really disappointing,” Kylie Norris (9, MST) said.

“I’m really anxious to see what will happen with track season, considering this will set us back significantly. We’re already missing two meets over break, along with practice. It’s really concerning,” John Woodhouse (10, J&C) said.

“I’m shocked that in this short amount of time Louisville has been put on this big of a lockdown and this pandemic is honestly really scary. I’m also irritated that we will be in school until June 10th,” Anna Carpenter (10, HSU) said.

“I think that we should stay in school being honest. I don’t want to go during the summer,” Alex Norton (10, YPAS) said.

“I’m concerned about missing baseball season. These two weeks off are a major setback not just for us but for everyone in Jefferson County,” Brady Russell (11, HSU) said.

“I think that it is a good thing to try and prevent this as much as we can because there is so much we don’t know about what the virus can do. So I think that if it is so significant that school needs to be canceled for three weeks there should be no school tomorrow,” Trey Ryan (10, HSU) said.

“Nine days are a lot to make up but I honestly think whoever’s power this is in will not make us make these days up,”  Zach Recktenwald (12, HSU) said.

“It’s crazy because three weeks is a long time. Instruction is going to suffer, especially for AP classes. Not going to lie, I will enjoy three weeks of extra sleep, but I am worried about how this is going to affect us later in the year. However, it’s a good call to protect the health of many,” Vy Pham (10, HSU) said.

“I’m really nervous and I hope One Blue Wall is going to be able to complete all of their magazines, but I fear we’re going to have to cut one of them,” Cassidy Witt (12, HSU) said.

“Personally I don’t think it needs to be blown out of proportion. I think complete ignorance towards it is not the move but neither is this option because it has created mass hysteria and there are certain products in stores that are completely out not to mention that some people can’t get the medications they need to live. And then for the school aspect, it’s my senior year and I might be missing out on prom and graduation which is devastating considering I’ve been looking forward to this forever. It’s one of the hallmarks of being in high school,” Kaden Fisher (12, HSU) said.
Parent and teacher reactions
“After the recommendation from the governor, I don’t think JCPS had a choice but to close. I think it is the best thing to do considering the potential community impact. I feel that JCPS and Manual has kept us as informed as possible and I honestly feel there has been full transparency from our administration.  It’s certainly scary but I think it has been handled as well as possible. It is definitely uncharted territory that we are all exploring together,” Kim Ryan, Manual parent, said.

“It is very easy to be frustrated and angry about the state of affairs but understand that we are engaged in a collective responsibility to sacrifice for the good of the most vulnerable among us. This is teamwork at its essence and we must rise to the occasion,” Mr. Tim Holman (Social Studies) said.