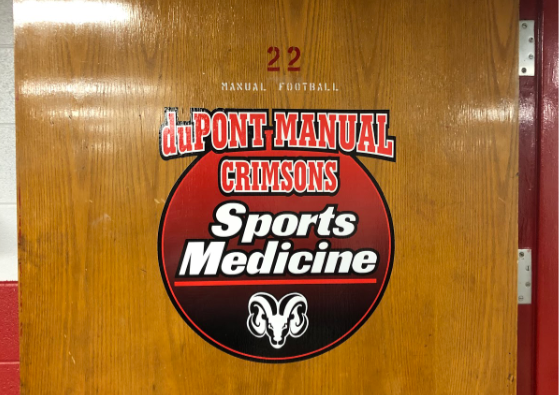 The door to the trainer's office. Photo by Liz Klein.

This story was submitted by Liz Klein (10, J&C)

At every school, the trainer’s office works as a resource for athletes in different ways, providing help with injury prevention and rehab as well as emergency injury situations. The trainer’s office is also responsible for documentation such as soap notes, which record an athlete’s injury, plan of treatment and referral to another medical professional if need be.

Manual’s school trainer is Taylor Zuberer, and her office is located on the lower level of the big gym, in the same area where the football locker room and weight rooms are.

Zuberer attends all home sporting events, but in the case of overlapping events, sports that are more likely to have serious injuries get priority while she is on call for the others. For example, in the fall when football, volleyball and cross country are going on, Zuberer would attend football on days when there is overlap as there is a higher possibility of there being an acute situation. All coaches are trained in CPR and first aid, so for the most part if an injury is more serious than that, Zuberer will go to the event to help the athlete.

Coaches and students alike agree that the trainer’s office is a great resource for them.

Ramont Townsend (11, HSU), who participates in football and track, goes to the trainer’s office typically five days a week and is very grateful for the resource.

“I had a torn PCL and meniscus, so I come here every day for rehab where I do band and balance work, planks and core work,” Townsend said.

“I mainly come here for my ankle which I’ve had problems with for years because I roll it a lot. When I come here I typically do rehab as well as heat and ice,” Northington said.

Mr. Tim Holman (Social Studies), the head cross country coach and track distance runners coach, also finds the trainer’s office is a great resource that can help with all the problems athletes may have.

“It’s a variety of things. Sometimes kids have really standard issues that a lot of kids have like shin splints or patellar tendinitis, and those are just things that require a little bit of rest, a little bit of icing, things like that,” Holman said. “Then we’ll have kids that develop more serious injuries or the potential for them and then the trainer’s office serves as almost a diagnostic tool and also as an ability to refer them to sports medicine if it’s required.”

Aside from helping athletes with injuries, the training office also serves as a learning tool for students who want to have a future career in the medical field. Athlete or not, students can be a student training aid with Zuberer and help treat injured athletes and get hands on experience.

“Towards the beginning of the year before track started, I kept asking Taylor if I could get involved, and she started teaching me how to do things like taping, how to stretch different muscles, and I had to read through the textbook and study anatomy of the body,” Brewer said.

Now that Brewer has gotten past her basic training, she can do some simpler things on her own; however, before students receive any medical attention from an aid, Zuberer must clear it.

“Sinopa has a good background with flexibility and strength conditioning, so she’s working with one of our students right now who has shin splints, and she’s kind of setting up the rehab because she knows what I’m looking for,” Zuberer said. “If there’s an injury and an athlete needs an ankle taped, I’m going to let the trainers take over it, but I have to tell them or clear with them what to do first unless it’s a super simple thing. They all know my expectations.”

Some student trainers want to work with Taylor year-round and some only do specific sports. Students can be involved in other things while being a training aid. For example, Brewer is a cheerleader, so she aids with track, which goes on after she’s done with her cheerleading season.

“I stay with Taylor mostly after school, and I do stuff on my own time like study and writing notes from the textbook pages that she’s given me and then as far as practicing, I did that after school,” Brewer said. “It’s my choice to stay after every day. Normally she says if you can’t make it, just text her because she knows that there are other things that people have to do, but I stay after every day until about five when track practice ends.”

For the most part, all of the training aids learn the same skill set regardless of sport because it’s not always people from the same sport going to the trainer’s office for help. However, a trainer’s study will somewhat cater to the sport they mainly work with. For example, Brewer focuses most on lower body muscles that are used for running.

If you’re interested in learning more and possibly becoming a training aid, keep an eye out in the hallways for signs that go up advertising an interest meeting. The meeting will be toward the end of March, according to Zuberer. It will include information as to what the job entails, expectations, a small packet to fill out with general information and possibly a small test run of something simple such as taping a wrist.