Popping the COVID-19 bubble: News outside of the virus 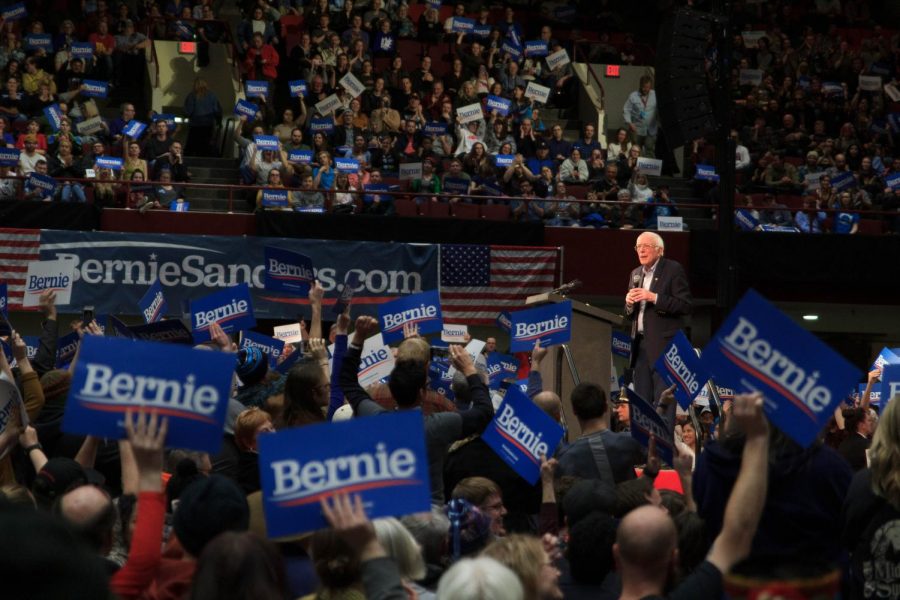 Sen. Bernie Sanders (D-VT) holds a rally hours before Super Tuesday at the Rivercentre in St. Paul, MN, on March 2, 2020. Photo taken by Nikolas Liepins. This photo is licensed under CC BY-NC 2.0 and was not modified.

It’s easy to get caught up in the constant flood of COVID-19 news. Every day there are more reported cases, closings and speeches from government officials about what to do next from various news sources. However, while it’s important to stay informed, coronavirus isn’t the only thing going on.
2020 Democratic Primaries
Senator Bernie Sanders of Vermont dropped out of the 2020 presidential race on Wednesday, April 8, 2020. This decision came after former Vice President Joe Biden won a number of delegate heavy states such as Texas, Florida, North Carolina and Arizona, while Sander’s own campaign began to stall. Sanders expressed that he saw no way to get enough votes for the Democratic nomination and that the current pandemic hastened his decision.

“I cannot in good conscience continue to mount a campaign that cannot win and which would interfere with the important work required of us all,” Sanders said in an online address to supporters that Wednesday morning.

This leaves Biden as the assumed Democratic nominee. However, Sander’s name will still be on the ballot.

“As I hope all of you all know, this race has never been about me. I ran for president because I believe that as president, I could accelerate and institutionalize the progressive changes, that we are all building together. And if we keep organizing and fighting, I have no doubt that that is exactly what will happen,” Sanders said towards the end of his Wednesday live stream. To watch the video and read the transcript of Sanders’ live stream, click here.

The 2020 Democratic National Convention is set to be held August 17-20 in Milwaukee, WI. The Kentucky Democratic primary election will be held Tuesday, June 23. Though previously set, these dates are subject to change.
Arctic Ozone Hole
Scientists have recently discovered what is to-date, the largest atmospheric opening ever recorded over the planet’s northernmost regions.

An ozone hole has formed over the Arctic, one roughly the size of the state of Virginia. One already exists over Antarctica but scientists are citing this new counterpart as a rare and unusual occurrence. An ozone hole is an area of extreme ozone depletion in the stratosphere.

This is comparable to someone having a closed wound on their arm, it’s not opened or bleeding, but there’s still damage.  Now on top of that closed wound, add a few scratches, just bad enough to break the top layer of skin.

Just like the skin, the Earth’s ozone layer isn’t fully exposed but threats can more easily come through. In this case, the threat happens to be the Sun’s ultraviolet rays. Lower ozone levels mean high UV radiation.

It’s significant in the Arctic because, while there’s been ozone depletion every year, 2020 has unexpectedly held the most extreme turnout. Scientists believe that the unusually frigid temperatures this year led to high levels of polar stratospheric clouds, which form at a high altitude in the stratosphere and allow chemical reactions to take place in which produce harmful forms of chlorine.

Another suspected factor is the slowing of atmospheric mixture. Typically, weather systems mix the low atmosphere with higher altitudes, which also happens to naturally mix up the ozone in the stratosphere; like hitting the refresh button. Scientists are still unsure as to why this process has slowed.

“This is unusual for the Arctic, but not at all comparable to the Antarctic ozone hole,”  said Paul Newman, who runs NASA Ozone Watch, an online portal that tracks the planet’s ozone layer.

The Antarctic ozone hole was discovered in 1985, and at its largest in 2006, measured an average of 10.3 million square miles. That’s larger than the entire continent of North America.

The Arctic ozone hole is expected to heal and slowly go away in the next month or so, but scientists continue to monitor the situation and seek further answers.

To learn more about the ozone hole, click here. For additional resources on the issue as a whole, click here.
Syrian Accusations
On Wednesday, April 8, the Syrian government was accused of launching three chemical weapons attacks in a northern Syrian village Ltamenah in March 2017.

The accusation came from the Organization for the Prohibition of Chemical Weapons, an international group that monitors compliance with the chemical weapon ban.

The O.P.C.W formed an investigative team to compile a report about who was responsible for the chemical weaponry used.

Both uses are considered war crimes and over 100 people fell ill.

To read more in-depth about this issue, click here.