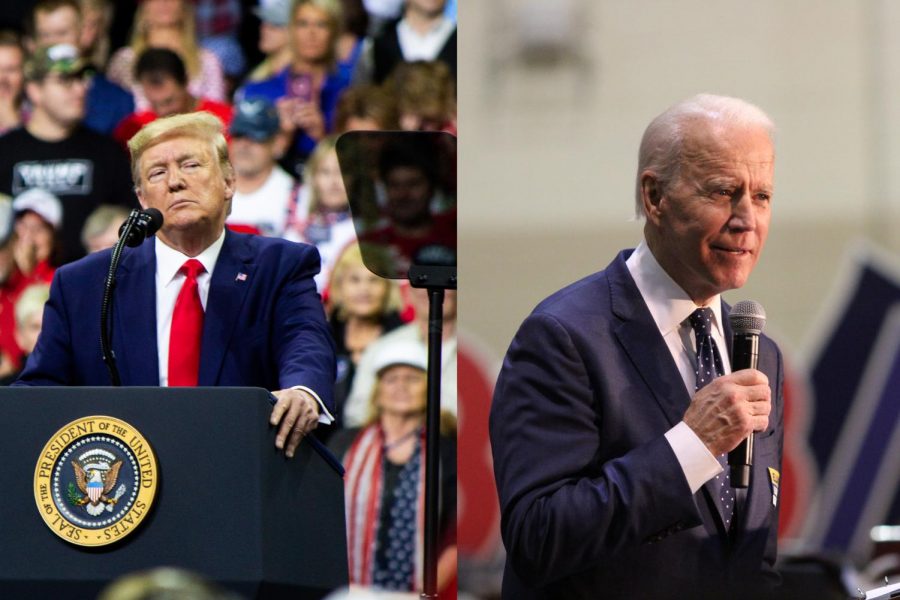 Sanders’s suspension comes the day after Wisconsin’s primary election, which continued as scheduled despite the COVID-19 outbreak after Gov. Tony Evers’s emergency executive order that delayed in-person voting until June 9 was overridden by the Wisconsin Supreme Court.

In the absence of legislative action, today I signed Executive order #74 suspending in-person voting for the April 7 spring election until June 9, 2020.

Evers also attempted to extend absentee voting for an additional week, but the United States Supreme Court blocked this action as well, discarding thousands of ballots postmarked after April 7. However, results are not expected to be reported until April 13 as valid absentee ballots are counted.

Now, with the primary season coming to a close, voters will turn their attention to the general election, which is all but certain to be a competitive and fiery contest between the candidates.
Recap: The Democratic primary
The field of Democratic primary candidates is often regarded as the most diverse group of candidates either party has seen in American history. Out of the 29 major candidates, there were five women (including Sens. Kamala Harris, Elizabeth Warren, and Amy Klobuchar), six belonging to a racial and/or ethnic minority group (including Sen. Cory Booker, Rep. Tulsi Gabbard, and Andrew Yang), and one LGBTQ+ candidate in Mayor Pete Buttigieg.

From the onset of the campaign, former Vice President Biden was the clear frontrunner, often holding more than twice the support of his closest challenger. However, this position made him the main target for the rest of the candidates on both the campaign trail and in the debates.

One of the most viral moments from the campaign was a confrontation between Biden and Harris in the first debate, where Harris criticized Biden’s record on busing, noting that she herself had been bused in the early stages of racial integration.

One of the biggest moments of #DemDebate2 came when Kamala Harris repeatedly asked Joe Biden whether he regretted opposing federal busing policies during the early years of his Senate career. Biden notably bristled.

As the months dragged on, many candidates who were unable to command significant support became ineligible for a spot on the debate stage and began to run out of campaign funds. Several candidates that were previously considered major contenders were forced to drop out before any votes had been cast, including Harris, Sen. Kirsten Gillibrand, and Rep. Beto O’Rourke.

By the time the Iowa caucuses rolled around, there were six major contenders for the nomination: Biden, Sanders, Warren, Bloomberg, Buttigieg, and Klobuchar. However, because he entered the race late, Bloomberg was not contesting in the first four primaries.

As voters, media, and analysts across the country cast their sights on Iowa, many were left disappointed after technical difficulties caused results to be delayed, leaving the caucus winner and the trajectory of the national primary unknown for several hours as candidates turned their focus to New Hampshire.

As the dust settled in Iowa, Buttigieg eked out a narrow upset win over Sanders, with Warren in third and Biden and Klobuchar trailing.

After the Iowa and New Hampshire contests, the direction of the race had changed significantly. The Biden campaign was reeling from disappointing fourth and fifth place finishes in the preceding contests, while Warren’s support began to decline as her supporters began to move towards other candidates.

The debate leading up to the Nevada and South Carolina contests was the first one to include Bloomberg after the party rules were altered to allow him onto the stage. Another widely-shared debate moment from the primary was Warren’s opening statement, where she lunged for Bloomberg’s jugular, attacking him for past comments about women, refusal to release his tax returns, and his institution of stop-and-frisk as Mayor of New York City.

Read more from the most contentious #DemDebate yet. https://t.co/aERVQUyCKY pic.twitter.com/EbH1oMpGXB

The South Carolina primary had often been viewed as a “firewall” for Biden due to his strength with African-American voters. However, his poor showings in the previous primaries appeared to hurt his standing, with polls showing a narrowing race between him and Sanders.

Days before the primary, Rep. Jim Clyburn, who serves as House Majority Whip and is a prominent member of the Congressional Black Caucus, endorsed Biden, giving him a significant boost ahead of voting. In the end, Biden carried the state in a landslide by nearly 30 points.

After South Carolina came Super Tuesday, where over a third of delegates were up for grabs. Despite Biden’s strong showing in South Carolina, the Sanders campaign was optimistic about their chances as there were several candidates in the race, and Sanders had taken the lead in national polling.

However, the following 48 hours would change the future of the race.

News broke the day after the South Carolina primary that Buttigieg was ending his campaign after a poor showing the previous night. Buttigieg was the first candidate to drop out that had won delegates in the prior contests.

The following day, the eve of Super Tuesday, Klobuchar announced she, too, would be suspending her campaign following her sixth-place finish in South Carolina. At a rally in Texas that night, she, Buttigieg, and O’Rourke endorsed Joe Biden just hours before polls were set to open across the country.

Going into Super Tuesday, there were four major candidates remaining: Biden, Sanders, Warren, and Bloomberg. These contests were the first states that Bloomberg was contesting, making the night’s results difficult to forecast, especially after his campaign had plastered the airwaves with millions of dollars in advertisements.

As results began to roll in, it was clear that the past few days had changed the race remarkably. Biden won ten states, including the big delegate prize of Texas and sweeping victories across the South. Sanders won four states, including California, a state with over 400 delegates and a state carried by Sec. Hillary Clinton in 2016. Bloomberg won American Samoa, while Warren failed to carry any states, coming in third in her home state of Massachusetts.

The results on Super Tuesday confirmed what many political analysts and voters had begun to believe; the race had become a two-way contest between Biden and Sanders.

The following day, Bloomberg suspended his campaign and endorsed Biden, further propelling the former vice president’s momentum. After Bloomberg, Warren informed her staff that she would be suspending her campaign as well, but declined to endorse either remaining candidate.

This led to a de facto two-person race between Biden and Sanders, meaning the race had narrowed from six candidates to two in less than a week.

The next round of elections on the following Tuesday demonstrated the effect of the field’s consolidation. Biden carried five of the six contests, including Michigan and Missouri, while Sanders carried North Dakota. After these elections, Biden had amassed a clear delegate lead over Sanders, leading some to call for Sanders to suspend his campaign to give the party time to unite around Biden before the general election.

However, Sanders opted to stay in, as there was still a feasible path to him winning the nomination.

Around this time, the novel coronavirus had begun to spread throughout the country. On March 13, the United States declared a national emergency, leading the campaigns to suspend rallies and Kentucky and Louisiana to postpone their primaries to the summer.

As the pandemic commanded much of the public attention and media coverage, the Democratic primary took a backseat to the public health emergency. Biden and Sanders continued to campaign using atypical methods, including increased advertising and communicating with their supporters via live streams.

After the aforementioned Wisconsin primary was held, it became clear that Sanders no longer had a realistic path to the nomination, and he suspended his campaign. This leaves nearly seven months until the general election in November when presumptive nominees Trump and Biden will face off at the ballot box.

Onwards to the general election

While Trump and Biden have been declared the presumptive nominees of the Republican and Democratic parties, respectively, the parties’ nominating conventions will not take place until July and August. However, the status of these events has been called into question as many public health experts doubt the feasibility of hosting such large events with the coronavirus threat likely still lingering, even in a diminished state.

Although Trump was able to coast his way through the Republican primaries without any major bumps, Biden has significant work to do in unifying the Democratic Party after a bruising and divisive primary. As of April 9, Sanders and Warren,  both prominent figures of the Democratic Party’s left-wing, have yet to endorse Biden.

Many Manual juniors and seniors are going to be able to vote in a presidential election for the first time in 2020, making the entire primary and campaign build-up very important. It is the first time that these students will get to have a say in the government that represents them.

Understanding different policies and plans are more important now, more than ever, to cast their vote in the election. With having Trump and Biden on the ballot, the two vastly different candidates have many plans that could set the U.S. on separate paths.

The Democratic Party has brought in many new perspectives, plans and policies for the future of the U.S. Although all of them dropped out, with Biden remaining, the other candidates have had a major influence on the election as a whole.

“Bernie really changed the way debates went. Personally, I thought he always knew what to say but never attacked other candidates personally. Overall, I think he was a really influential candidate,” Chloe Drago (9 HSU) said.

Although Sanders had a big influence on the Democratic debate stage, other Manual students see a different side of how the election has already been shaped by “voting blue”.

“Trump has had the most influence. Why? Because it’s the sole purpose of any Democrat to beat him. Even early in the primary Democrats were talking about how they individually would beat Trump. Trump has energized not only his base to try and re-elect him; he has also energized Democrats to beat him,” Jimmy Renton (12 YPAS) said.

This year of politics has been a constantly shifting cycle of campaigns, new ideas and introduction of new candidates. Manual students’ views range all across the board, making the Democratic primaries a daily-changing source of information to take in.

A common opinion of these students is to have a more inclusive environment in the 2020 election results. “I would love to see a woman as Joe’s running mate, which he has vowed to choosing a woman,” Renton said.

The election as a whole has sparked a new conversation of inclusivity and open-involvement in the political world. What candidates think of women’s rights, climate change, equity and other serious conversations floating around the U.S. are what has distinguished this year’s election most.

In order to contribute to what candidate you want to represent you and your goals for the U.S. as a new-voter, don’t forget to practice your civic duty and register to vote. Click here to register at any time before May 25, 2020 (29 days before the primary election).