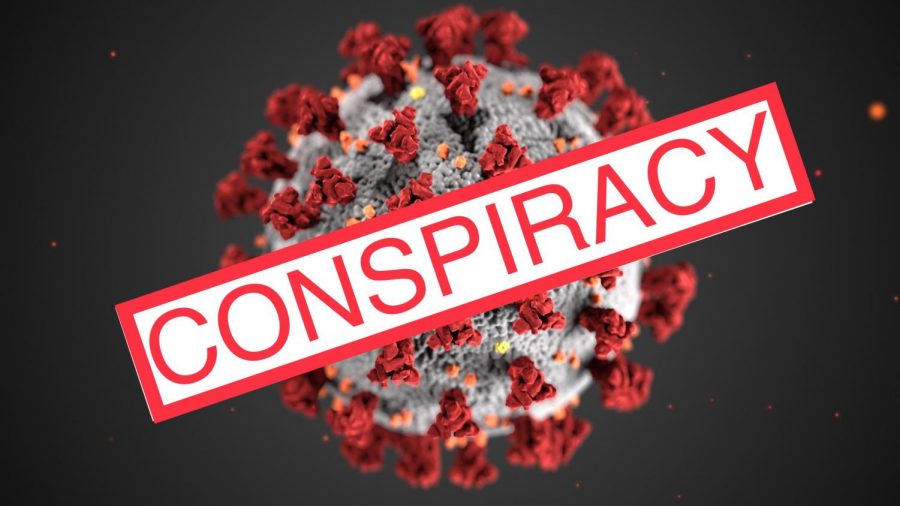 Image from CDC Online Newsroom public domain. Photo provided by Alissa Eckert, MS; Dan Higgins, MAMS. This photo was edited for use in this story.

It’s no secret that COVID-19 has changed everyone’s life in some way. World leaders, scientists and healthcare workers advise us daily on ways to stay healthy and safe as researchers look for a solution. However, some people believe this world crisis isn’t really what authorities claim it is. Dozens of conspiracy theories have been created and adopted by many groups about what is really going on with COVID-19. Here are three coronavirus conspiracy theories explained and debunked.

5G network is the cause of COVID-19
In early March, Dr. Thomas Cowan (who was at that time on probation) released a video claiming that radiation from the 5G cell phone network was the cause of COVID-19. He explained that the radiation “poisoned cells,” which caused them to release waste that became COVID-19. Shortly after the video was published, anti-vaccine advocates and other coronavirus protesters quickly ran with the idea, making posts on Facebook, Twitter and other social media platforms.

Many claims in this video were false. For example, the science of his claim doesn’t add up. Viruses are not created as a way to get rid of poison, and scientists have been able to take apart and put together the virus in their experiments. You can watch Jason Kindrachuk, a virologist and Canada research chair in emerging viruses at the University of Manitoba explain this here.

Cowan also claimed that Wuhan, China, the place where COVID-19 originated, was the first place to have 5G, which isn’t true. He tried to further his argument by saying the 1918 Spanish Flu pandemic was caused by the newly introduced radio waves despite the fact that the first commercial radio station started broadcasting in 1920.

Dr. Cowan  is on probation by the Medical Board of California for using unlicensed drugs on a breast cancer patient. He also has written several books that express opinions contrary to those popular in the medical world, including one that disagrees with the immunization of children. His video about 5G and coronavirus has since been taken down due to spreading misinformation.
“Plandemic” Documentary
This video, entitled “Plandemic” went viral on many social media platforms last Thursday, May 7. In this film, Dr. Judy Mikovits, a prominent anti-vaccine advocate who has spread similar conspiracies for years, makes many false claims about the origin of COVID-19 and frequently attacks Dr. Anthony Fauci, director of the National Institute of Allergy and Infectious Diseases and Dr. Robert Redfield, director of the CDC.

The video begins with Mikovits claiming she was “fired” from her research job for “exposing deadly secrets,” which is where the false claims begin. One of the real reasons she was fired was for an article she published in 2009, which was later retracted when others tried to recreate her study and failed to get the same results. This led others to believe the data was contaminated.

In the video Mikovits also claims that  people with the flu vaccine are 36% more likely to get COVID-19, which she claims to have derived from a study by the Department of Defense on whether the flu vaccine makes one more susceptible to other respiratory viruses. The results of the study actually state that the study “showed little to no evidence supporting the association of virus interference and influenza vaccination.” To read a more in depth description of the inconsistencies of this claim click here.

Mikovits also says in the video that ever since 2013, anyone who received the flu vaccine was also simultaneously injected with a dormant COVID-19 strand. According to Mikovits, the disease would then be “activated” by covering your nose and mouth through a mask. If this was true, every person who has received a flu vaccine since 2013 would test positive for COVID-19, which has not shown to be true. In addition, there is zero evidence supporting Dr. Mikovits’ mask theory, so many health officials are considering this video to be dangerous to the public and have taken great measures to remove this video from social media sites.

To watch the video yourself, click here.
Bill Gates created COVID-19 to profit off creating a vaccine.
While this may sound far off to some, conspiracy theorists believe that Microsoft co-founder, Bill Gates, created COVID-19 in order to create a vaccine and profit from it.

This theory originated when a TED talk by Gates in 2015 resurfaced. In the video, Gates explains how the next world catastrophe will be a deadly disease, not something like a nuclear war. The main point he makes is how there is virtually no system in place to stop an outbreak. He uses diseases like Ebola to highlight the missing pieces. To watch the video yourself click here.

Humankind has never had a more urgent task than creating broad immunity for coronavirus. It’s going to require a global cooperative effort like the world has never seen. But I know we’ll get it done. There’s simply no alternative. https://t.co/lDRkgqJ39k

Because of this, some believe he created the virus and funded clinical trials to find a vaccine in order to profit from it. According to Zignal Labs, a social media data collector, 16,000 posts were made regarding false information about Bill Gates. However, the Gates foundation has donated over 250 million dollars to COVID-19 research.

According to their website, the Gates Foundation practices “catalytic philanthropy,” meaning the foundation acts as an “investor,” but they neither expect nor receive any of the benefits, which are instead given to “more vulnerable areas.”