Addison Evers: Aiming for the goal(ball) 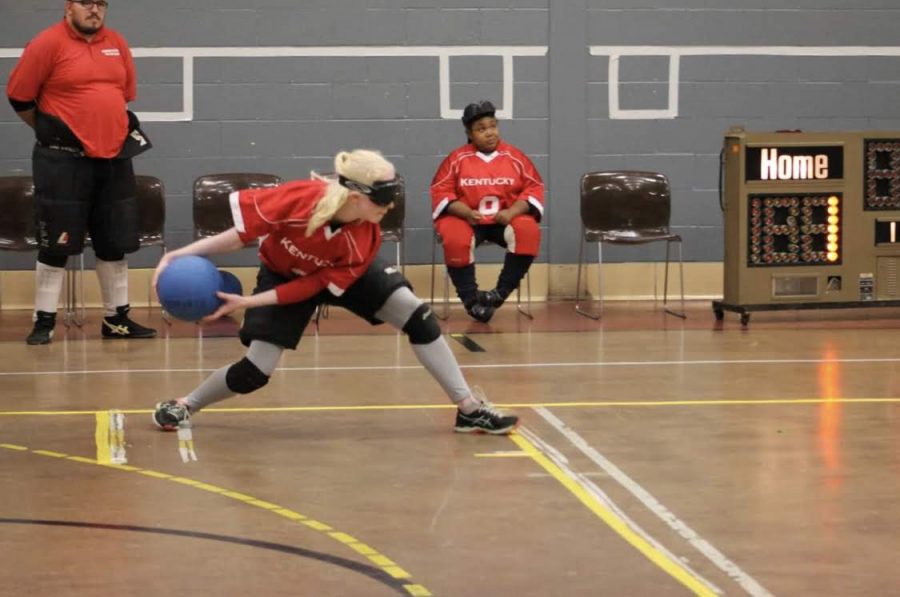 Addison Evers  (12, J&C) strolled into her fourth block class and pulled out her headphones. With a few ‘schwicks’ and a snap, she folded up her white cane with a red tip and wound the elastic around it. Putting the cane in her backpack and sitting down, Addison pulled out her iPad to begin class.

Normally, during fourth block on a Friday like today, she would be counting down the minutes until the clock hit 2:20, and the bell rang to release everyone to the weekend, but today, she found herself wishing that the minutes would pass a little slower. Suddenly, geometry seemed like a very interesting subject.

As the clock crept nearer and nearer to the telltale acute angle that would signal the end of school, Addison wrung her hands and jiggled her knee.

Today was the first day of the regional goalball tournament, and although Addison had been playing for a few months, the thought of the game still gave her butterflies.

Goalball is a sport for people who, like Addison, are blind or visually impaired. Addison was born with Albinism, a genetic disorder that causes a lack of pigmentation in the hair, skin and eyes. Albinism usually comes with severe visual impairment. For Addison, this impairment is more severe than usual for people with albinism. Along with albinism, she has a combination of esotropia, which causes her eyes to turn inward, and photophobia, or light sensitivity. This all means that Addison is legally blind

Addison began playing as a freshman. She had played once before as a younger kid, so she thought she would try out for the team at the Kentucky School for the Blind (KSB).

“The school for the blind needed one more girl, and I was like ‘Ooh, I played that when I was 11, and I really liked it. Why don’t I go out for it?’” Addison said. “I had my first practice… hated it. I wanted to quit, but I couldn’t quite because my mom was mean.”

This dislike persisted through most of her freshman year, but she kept playing because if she knew that if she quit, the school wouldn’t have enough players for a team.

“I was terrified of it all freshman year,”  Addison remembered.  “It was very scary.”

That was why she was so nervous to go leave geometry to go to the regional tournament. She had only played a few real games, and being completely in the dark while balls were hurled at her was still a slightly frightening idea.

More than anything, she was scared of getting hit in the stomach. The ball used for goalball is roughly the same size of a basketball, but it is twice as heavy, and it hurts when you block it. Addison has nicknamed goalball season “the season of bruises” for that reason.

At the tournament, her team was going against older, more experienced teams. Inevitably, at one point she had to block a ball with her stomach, just like she had been worried about, but surprisingly it didn’t hurt nearly as much as she had expected it to. At that moment, she decided that she would play again the next year.

That was freshman year. Now, Addison is a senior, and she has been playing for four years. She used to play left or right on the court, but now she plays as the center, the leader of the team.

Through her time on the team, she has learned a lot about herself and her resilience.

“[Goalball] taught me that I don’t have to fear pain all the time…Pain is temporary– the joy you feel when doing something will last a lot longer,” Addison said. “It taught me that I can overcome what was a huge fear of mine. I was afraid of goalball, and now you don’t have to pay me, and I would play every week.”

Outside of goalball, Addison is incredibly busy.

“Even though it might be harder for her, and some days are better than others, she doesn’t give up. She keeps fighting until she is at least as good as everyone else if not better,” Benson said.

On top of that, she has to balance school work, college applications and fitting in time to relax and read. She is an avid reader and she has been for most of her life.

“I absolutely adore reading. I’ve loved to read since ‘Harry Potter,’ which I read in third grade. I read through Ebooks and audiobooks and if I can, large print,” she said. “If professional reader was a job that you could get paid for, one hundred percent that’s what I would do.”

Additionally, her love of reading has brought with it a love for writing.

“I’d love to be an author,” Addison said. “I’m actually writing a book right now in one of my classes.”

Addison loves all of her sports and activities, but goalball has a special place in her heart.

“All of our sports are the School for the Blind are adaptive… all of them are adapted for us. This one was made for us,” she said. “So that’s what I love. The sighted world has to adapt if they want to play. They have to adapt to our rules instead of us having to adapt to their world.”

Addison has spent a lot of her life moving between the sighted world and the blind world. She has gone to public school her whole life, but she has also spent a lot of time doing sports and activities with the Kentucky School for the Blind.

Because she has lived her life moving back and forth between these two communities, Addison constantly has to adjust to how other people see her in each of the different situations.

“I am blind in the sighted world, but I am sighted in the blind world,” she said.

In both worlds, she has had to deal with some stigmas around albinism.

“We don’t have red eyes,” she said, joking that some people believe that people with albinism are vampires or demons.

She also talked about how the terminology is important when talking about albinism.

“The term albino is probably more mainstream, but that is not the correct term,” she said. “We are people before we are disabled, so you always want to say ‘a person with albinism’ because albino can be demeaning.”

Addison has also inspired her friends.

“What I admire about her the most is how unbelievably strong she is. Sure she is legally blind but she doesn’t let that control her… she inspires me to work harder every day,” Benson said. “She is one of the most amazing people I’ve ever met, and she has helped shape me into the person I am today. I can’t imagine my life without her.”

Addison has grown and changed a lot from that girl in geometry class freshman year, especially in a goalball sense. She has conquered her fear of the sport, and in the absence of fear, affection has grown.

“Goalball is something 100% original, 100% made for people who are blind and visually impaired. So it’s mine. It’s my sport. It’s a sport made for me,” Addison said.

Like everyone else, the coronavirus pandemic has affected a lot of aspects of Addison’s life. Because she is so involved with sports, finding ways to stay active has been a challenge during this time.

“Staying active has been hard because I need a guide when running for optimized safety. Obviously that’s not allowed,” she said. “I try to run on cloudy days or at dusk, but it’s still really scary and I’ve ran into a lot of different stuff… (only one car though).”

Other than that, Addison has just been working on school and reading, like most other high school seniors.

Addison plans to attend Asbury University next fall, assuming that it opens in the midst of the coronavirus pandemic. She has verbally committed to be on the tumbling team there.

She hopes that while at school she can continue to practice goalball, even if there isn’t a team.

“Even if I can’t join a league– being able to hone skills and get stronger physically,” she said

She has dreams of being able to participate in the Paralympics. Possibly the next Paralympics if she practices enough.