‘No Justice, No Peace’: Protestors demand justice for Breonna Taylor 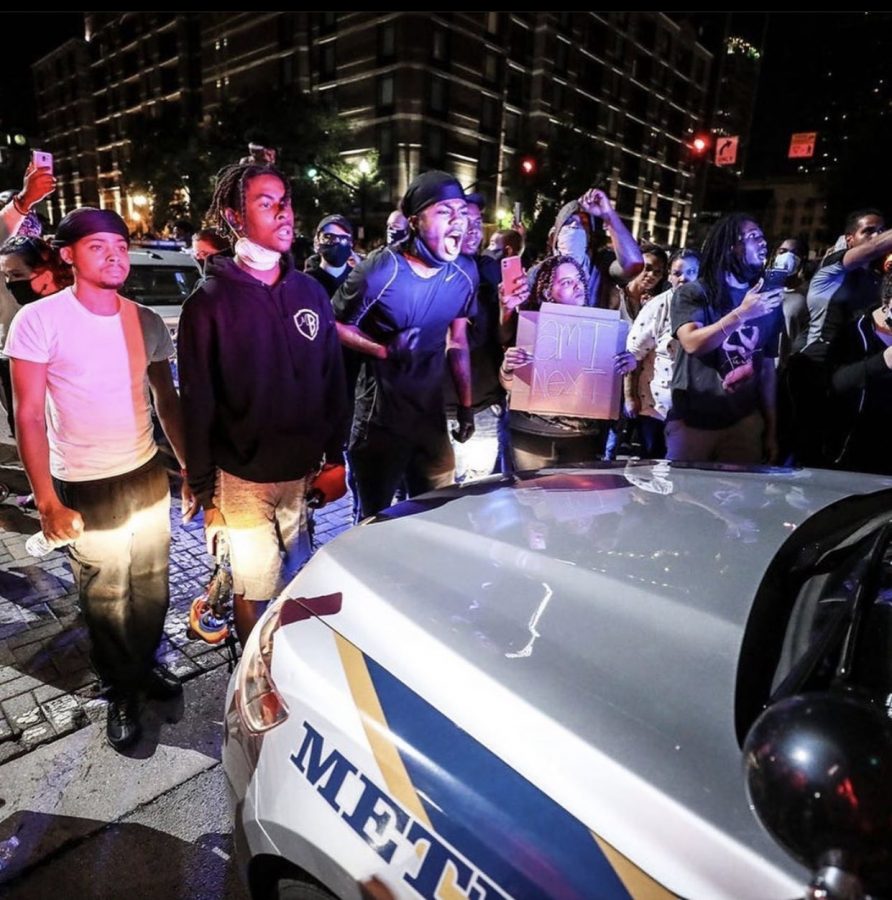 As police arrive later in the protest, protestors continue to make their voice heard and demand justice. Photo courtesy of @lilnooreo on Twitter.

The three officers broke through the door of Taylor’s apartment on a “no-knock warrant” looking for narcotics and their dealer.

Kenneth Walker, Taylor’s 27-year-old boyfriend was at the scene and fired at the officers upon their entry. Walker claimed the officers didn’t announce themselves and weren’t in uniform, so he had thought he and Taylor were being robbed.

Walker shot one of the officers in the knee in an act of self-defense.

The FBI has opened an investigation on the murder of Breonna Taylor and all charges against Walker have been dropped.

The Taylor family filed a lawsuit against LMPD for the murder of Taylor with added charges on the officers not being in uniform and not announcing themselves.

Mayor Greg Fischer has suspended all “no-knock warrants” as of Friday, May 22, 2020.

LMPD Chief Steve Conrad has stated that following this incident, all officers will be required to wear body cameras in all search warrant operations.

Following this new protocol, Conrad has announced that he will be retiring before this July.
Justice for Breonna: the protest
On May 28, 2020, at 6:00 P.M., a peaceful protest began downtown at Jefferson and Main Street to fight for justice for the murder of Breonna Taylor.

There were an estimated 500-600 protestors crowding the streets and 100-200 riot police carrying batons.

Whites forming a barrier between black protestors and police. pic.twitter.com/8oXB1tAtJw

Around 11:30 P.M, there were reports of shots fired, which injured seven people, two of which were taken to city hospitals needing surgery; both people are stable and recovering.

LMPD and participating members of the protest are still unsure who fired the shots.

Police threw tear gas into the crowd in an attempt to contain the protests but seemingly only escalated the anger.

At least 7 shot in Louisville, KY at Breonna Taylor protests.

Taylor was killed in a police raid in her apartment back in [email protected] from @wave3news has more. pic.twitter.com/3dO3Iomshb

The streets were filled with the echoes of protestors chanting “No justice, no peace.”

Covering a wide range of downtown Louisville streets, beginning on Jefferson and Main Street, moving to City Hall and 6th Street and eventually to the KFC Yum! Center, law enforcement blocked off traffic and closed the Second Street bridge.

Breonna Taylor’s sister took to social media to thank everyone who came out to support her late sister, but asked that they go home before anyone else gets hurt.

Here is a video of what things look like in downtown Louisville. Hundreds of protesters have the intersection between City Hall and Metro Hall blocked off. @WDRBNews pic.twitter.com/8olkKTYDaP

“We demand change. We demand reform. But we do not need for our community to get hurt,” Juniyah Palmer said.

Mayor Fischer took to social media just before midnight on May 28, 2020 to agree with Taylor’s family that the protestors have a right to be angry and fight for justice, but in a way that isn’t violent.

A message from Breonna Taylor’s family urging protestors to be peaceful, go home and keep fighting for truth. pic.twitter.com/if5MH5UcCW