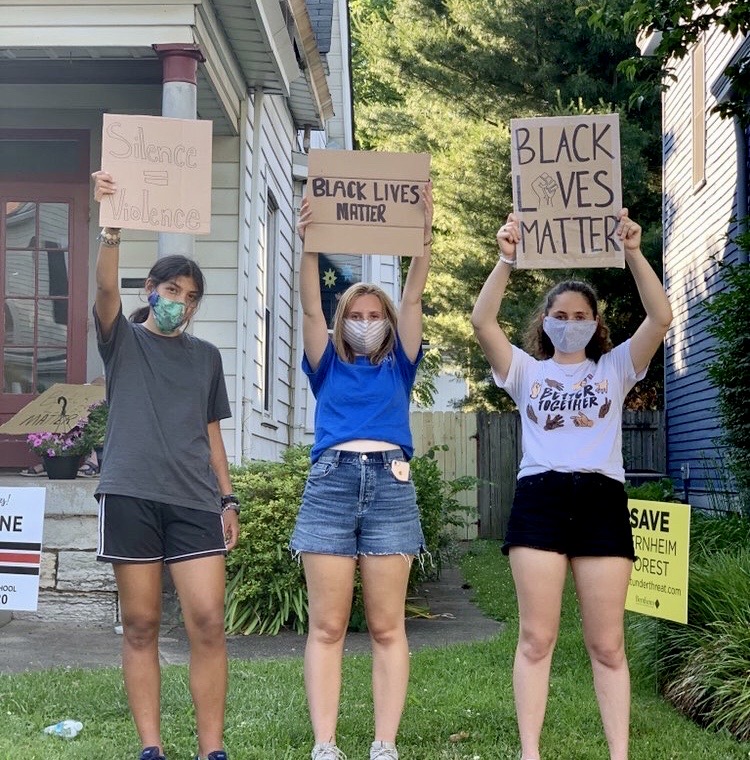 Every night since Thursday, May 28, demonstrators have gathered in downtown Louisville to protest against the Louisville Metro Police Department (LMPD)’s killing of Breonna Taylor, a 26-year-old Louisville resident and former EMT. The LMPD officers broke into her home on March 13 with a battering ram, believing a drug dealer was using her house to receive packages.

On Saturday, May 30, Gov. Beshear announced that officers from the National Guard would be joining the officers from the LMPD downtown. On May 31, the National Guard and LMPD shot and killed David McAtee, the owner of a local barbecue stand, in response to an alleged gunshot into the line of officers. Despite regulation, the officers did not have their body cameras on. The night after, protestors marched to remember McAtee and Taylor.

Most groups of protestors demonstrated peacefully, chanting Breonna Taylor’s name, as well as “I can’t breathe,” a reference to the death of George Floyd, who was killed by Minneapolis police officer Derek Chauvin.

Some individuals threw fireworks and water bottles after police shot pepper balls and tear gas into the crowd.

Members of the Manual community have been actively involved in these demonstrations. Others vouch for Black Lives Matter via social media by signing petitions and contacting legislators.

Justin Price is a rising J&C junior who attended a peaceful protest in Saint Matthews.

“Like everybody else, I’ve just been extremely angry about everything that is going on right now in our country, so I was ready to get involved in any way that I could. I had already donated money and I was calling the numbers that have been shared around, and signing petitions, but I really wanted to go to a protest and do something that was more direct,” Price said. “There was such a strong sense of unity among the crowd and everybody just connected over the messages of peace.”

Some students were victims of tear gas. “It feels like someone has punched you in the chest. If you’ve ever been hit so hard by something you can’t breathe, your brain is not thinking, it’s like that. Except for your entire body is on fire, your eyes hurt, you can’t see, and you’re panicking, and [the LMPD is] still marching towards you. So, now, you’re lifting people off the ground, who are screaming in pain, trying to drag them away,” said a rising Manual junior who asked not to be identified because they attended the protest without parental permission.

Join us in flooding the LMPD and Louisville’s mayor’s with calls demanding action tomorrow from 2-4! Complete the google form in my bio to endorse our demands and pledge to make calls! Repost & Share @louisvilleyouthcalltoaction

“Join us in flooding the LMPD and Louisville’s mayor’s with calls demanding action tomorrow from 2-4!” Lindsey wrote on June 4.

Quintez Brown, a 2018 HSU graduate and writer for The Courier Journal, spoke at the teacher-and-student-led protests on June 5.

“In order for us to create the world that we would like to live in, we must use our freedom to protest and demand a change to the current way of order,” Brown said. “If we don’t protest, we have decided to accept the current way of things, and since Breonna and George are no longer here, I can’t do that.”

“It’s important to me as a human to fight for #BlackLivesMatter because for one, intersectionality is important. I’m not Black but as a non-black POC, I know that my ally-ship is really important. As an organizer, I have skills and connections in the community that can benefit this movement. I know my own skills as a leader and I want to be able to use those skills to help the movement for black lives,” Gupta said.

“A sign displays your voice in written form, it’s a demonstration of freedom of speech, but not everyone has the time or materials to create one, especially when you have to think about all the safety concerns surrounding protesting. I decided to make them because I guess I wanted to give people who are protesting and putting themselves at risk one less thing to worry about,” Martinez-Morison said.

Due to their fears of coronavirus and arrests, both Martinez-Morison and Isom have taken precautions.

“I realized that there were so many things you have to be constantly cautious of, having a mask, socially distancing, having water and food, milk in case you are gassed, important numbers written down in case you are arrested and of course staying safe from police brutality and violence,” Martinez-Morison said.

So far, the two have delivered nine posters to those who have requested them online.

“I think we both plan on making signs as long as people request them . . . Even if we are not able to go to the protests I want to be able to provide people with signs and just show my support off of social media as much as possible,” Isom said.

On Friday, June 5, several Manual teachers attended a protest in support of their black students.

Thousands attended the teacher and student rally for #BreonnaTaylor in #Louisville today.

Mr. Abplanalp, a communications teacher at Manual, is not content with how the country’s leadership is handling the situation.

“We must demand a real change of ourselves and of our elected leadership. As a community we are complicit and we must not settle for the empty gestures and bogus PR moves or the shrugs from our leaders about how ‘this is just the way it’s always been done, there is nothing we can do about it,’” Abplanalp said.

“What stood out most to me, even more than the omnipresent peaceful goodwill and empathy amongst the incredibly large and diverse crowd, was the amazing leadership displayed by the young people leading much of the protest,” Abplanalp concluded.

Demonstrations continue every day around Louisville as members of the Manual community and many more advocate for the Black Lives Matter movement.