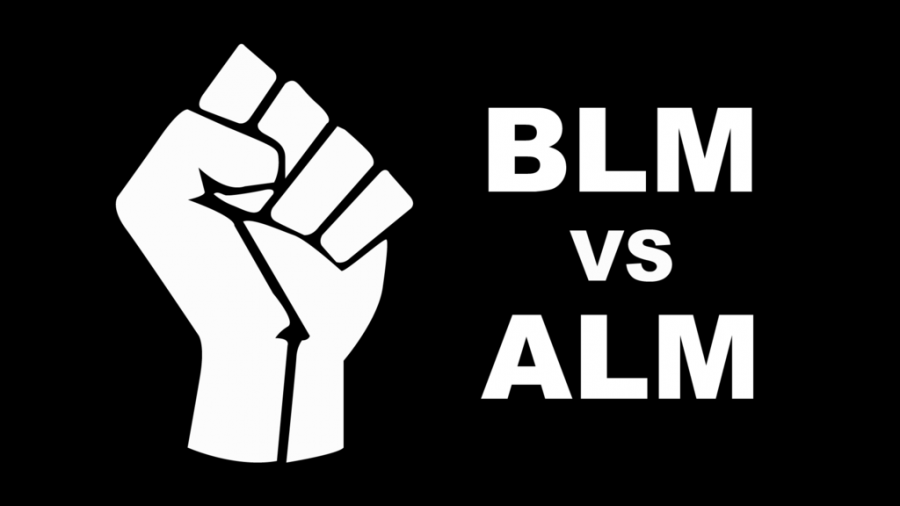 The Black Lives Matter (BLM) vs. All Lives Matter (ALM) debate has become a worldwide topic of conversation and has caused conflicts between friends and family alike. Many people don’t understand the struggle of being Black in America because it’s hard to put yourself into someone else’s shoes and to look at the world from their point of view.  However, many ALM followers don’t take time to do the research to try and understand, and instead push their own point of view. Their lack of education on the injustices Black people in America face causes a misunderstanding toward the BLM movement. While many people, schools, and organizations are supportive of the BLM movement, there are still many who use the ALM argument.

So what do BLM and ALM really mean? BLM is a movement protesting the disproportionate systemic racism and police brutality that Black Americans face every day. ALM is a counterargument meant to bring down and discredit BLM, claiming that the movement is trying to raise Black people above everyone else. Many ALM supporters claim to subscribe to the movement because it includes everyone. They make the argument of ‘why don’t ___ lives matter?’ while failing to realize that the BLM movement is trying to create equality for everyone, and that they’re not trying to put Black people above everyone else.

A big argument that ALM supporters use against the movement is bringing up black-on-black crime to discredit police brutality. However, black-on-black crime doesn’t exist. According to the Bureau of Justice Statistics’ 2019 Report, 70% of criminals are the same race as their victims in crimes involving Black Americans and 62% in crimes involving white Americans. In a recent news interview with 11alive, Atlanta’s local news channel, Clifton Crawley, the community chair for the Atlanta NAACP, says that the violence is caused by multi-generational racism. Crawley says that “There has always been a deep level of concern for violence and poverty and crime within our community.” while also pointing out the many organizations focused on this issue such as Street Groomers and My Brother’s Keeper.

ALM doesn’t have an argument against the BLM movement, so they single out the organization trying to tear down the movement. ALM supporters fail to realize that BLM is not the opposite of ALM, but rather a way to show that society is focusing on Black lives right now. A way to understand this is to think of a burning house. Firefighters are going to focus on the house that’s on fire, instead of hosing down every house in the neighborhood. ALM followers are using the false pretense of caring for all lives to squash a huge progression in society. Many ALM followers don’t listen to the movement’s goals and end up arguing the same points the movement is trying to make. The most common example of this is the argument that everyone should be equal and treated the same. Many ALM supporters don’t understand that this is the goal of the BLM movement, for everyone to be treated equally, regardless of skin color.

An example of ALM supporters not separating the organization and the movement is the use of a recent video that has emerged, with the leader of the BLM organization saying she’s a trained Marxist. Many people have used this against the movement, saying that the movement supports Marxism. However, the view of an organization’s leader doesn’t show the view of an entire movement, or even of the members of the organization. One example of this is Planned Parenthood and its founder, Margaret Sanger. Margaret was a vocal advocate for eugenics, but the Planned Parenthood organization and its members don’t agree with her views; they’ve gone so far as to remove her name from the building to show their disapproval.

A popular argument ALM followers use against BLM is claiming that all of the protests end in violence and property destruction. However, a recent report from The Armed Conflict Location and Event Data Project shows that over 93% of BLM protests have been peaceful. While some protests have turned violent, it’s usually because of the police using force to stop the protest rather than the protesters themselves. A New York Times Article shows a video of protesters holding a non-violent protest until they’re attacked by police.

While ALM may seem like a great movement that’s pushing for equality for everyone at first, it doesn’t take much looking to realize the truth. If ALM supporters truly cared about making the world an equal place for everyone, they would be advocating for not only the Black community, but other oppressed communities as well, such as the LGBTQ+ community. The only time ALM supporters bring up equality is to discredit BLM and its goal when the movement is mentioned. They continuously attack the movement and its flaws instead of celebrating the change it’s trying to make. If All Lives Matter supporters actually cared so much about all lives, they would support BLM too.