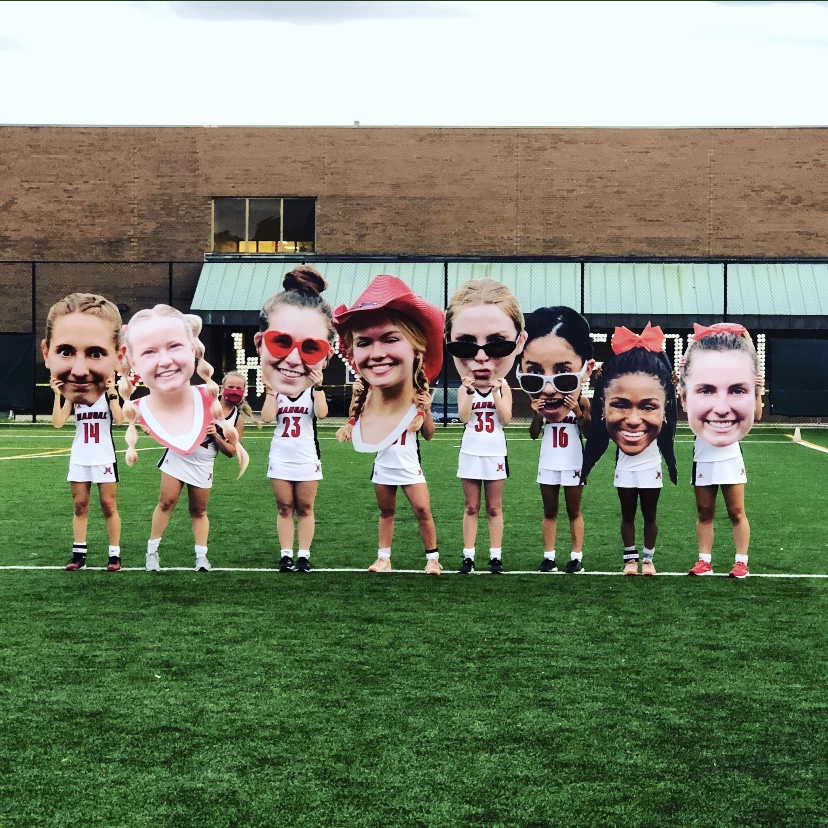 Picture of the field hockey seniors on Senior Night

Cross Country:
Last week, the cross country team participated in a Tri-Meet at Tom Sawyer State Park against Eastern, Male and Fern Creek. Overall, the boys placed second with 31 points behind Eastern. The girls placed first overall with 23 points. They will partake in the Rumble Through the Jungle at Creasey Mahan Preserve today (Saturday).
Field Hockey:
After a dominating senior night with a 10-0 win against Eastern, the Crimsons went on to play Sacred Heart Friday and came up short with a 4-0 loss. They will host Holy Cross on Monday at Rachel Baker Field at 6.
Football:
The football team will be in action tonight at 7 for a scrimmage at Central. Their first regular-season game will be against Cincinnati Lassalle on Friday at Manual Stadium with the kick-off set at 7:30.

Boys’ Soccer:
This week, the boys’ soccer team will begin their season with a home game against Portland Christan beginning at 5:30. The team will also have two more games on Tuesday, hosting Fairdale at 7 and away at Butler, Wednesday at 7.
Girls’ Soccer:
The Lady Crimsons will participate in the Lady Knights Challenge Cup starting September Tuesday at Lexington Catholic. Their first match will be against Paul Laurence Dunbar at 6.
Volleyball:
To start the volleyball season there will be three varsity matches this week. The first will be against Presentation on Monday at home with the start time at 7. The team’s second match will also be at home against Central at 6 on Tuesday. Then they will travel to Butler on Wednesday to compete at 6.

Golf:
For the opening week, the golf team competed in four different matches. Both the boys’ and girls’ teams participated in the JCPS Long Run Championship on Tuesday. The boys’ golf team competed on Wednesday against Bullitt Central, Thursday at Shawnee Park Golf Course and today (Saturday) at the Butler Invitational.