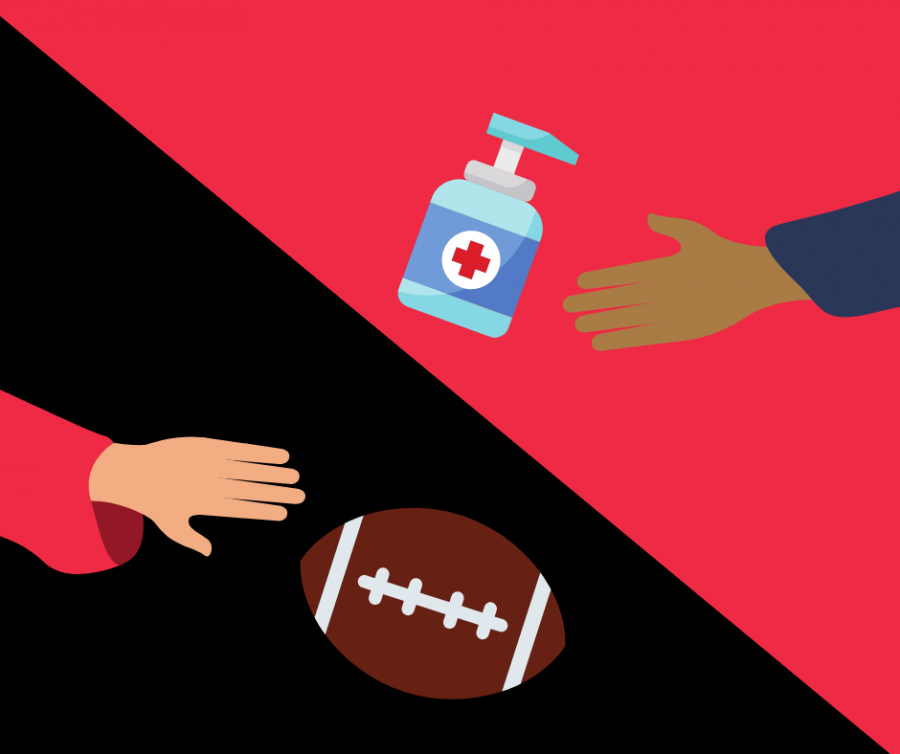 As fall sports carry on for the season under KHSAA safety protocols, many teams are beginning to start their game season. There have been many measures taken by the fall sports teams to limit COVID-19 and make sure players are safe.

Cross country
Cross country is continuing to practice and have meets while adapting around corona obstacles.

“I thought we would get some summer conditioning in and then the season would pretty much end. I didn’t think they would allow us to practice or have meets at all. It’s cool that there’s a way we can do this safely and have a season,” Nick Schumacher (11, YPAS) said.

At the start of practices, all team members are required to have their temperature taken, as well as fill out a questionnaire on whether or not they’ve exhibited any symptoms or have been diagnosed.

Cross country has over 80 kids on their team, so they split up into pods of 10 people. They are utilizing cones set more than six feet apart to keep their distance and wearing masks unless engaging in rigorous physical activity. Additionally, practices have been cut to an hour and a half, versus the regular two hours.

“Even now that we’ve done a couple of meets, It’s not clear whether we’ll be able to participate in regionals or state,” Coach Holman said. Concerning meetings, the KHSAA has severely condensed the number of runners allowed in a meet to 200.  So far, no one has run in a race with more than 39 other kids and usually a quarter of them are their teammates.
Field hockey
Field Hockey’s varsity team holds two wins to their title as of now. During their practices, they proceed with their normal activities but also split into pods of 10 to maintain a six feet distance when running.

At games, the girls are required to use hand sanitizer before and after, wear masks when they are not playing and they cannot shake hands with the other team at the end.

“I knew we would have a lot of restrictions and it would change a lot about the team and season. I didn’t care because I just wanted to play,” Anna Claire Straub (11, HSU) said.

Before practice,  players have to fill out a google doc over if they’ve had any symptoms of COVID-19 then show proof that it was submitted at the start of practice. Afterward, their temperature is taken, which has to be below 100.4 degrees according to the KHSAA. Masks are required to stay on, and they stay in small groups if they need to walk somewhere such as the locker room. They also take the measure to stand eight feet apart instead of six.

“I didn’t know if we would have a season or not but I still kept my hopes up, we have a great team this year with almost all of our starters returning,” Darien Wilson (11, HSU) said.

Recently, a new protocol was issued that limited the previous amount of 15 kids allowed on a bus to 12.

“The list of protocols is endless and constantly changing. It’s not the desire to implement them, but keeping up with them that’s hard,” Carmony said.
Golf
While the boy’s golf team has begun their games, they haven’t been able to have many practices. Some team members have been able to get together and practice among themselves though.

Due to them being an outdoor sport with limited contact, they haven’t had to withstand too many changes, but one of the major ones has been prohibition from touching the flagstick.

Now, instead of removing the pole once one is putting the ball, it has to be kept in. As a result, sometimes the ball may be on its path to the hole, but it’ll bounce off the flagstick. Judgement has to be made on whether or not the ball would’ve gone in if the flagstick was not there. In addition, masks are required for golf carts rides as well but are not mandatory for the game.

While girls golf also doesn’t have to focus much on practices and conditioning, they have utilized that for team bonding.

“As a team, we are performing about the same. The biggest improvement I’ve noticed though  is that we are a lot closer this year, ” Audrey Neukomm (11, MST) said. Last year’s senior graduation was very large, allowing many new players this year.
Soccer
Boys soccer had their first win with the mercy rule in last night’s game. They have been conditioning from the start of mid-June for several days a week. It wasn’t until recently that the team was allowed to play in soccer-like situations.

“I’m fairly confident we are in the best shape out of every soccer team in the state,” Iman Dashti (11, MST) said.

Players not on the field have to keep the six feet distance from other players at all times and must be wearing a mask. At the end of the game, players cannot shake hands.

“Last night felt so weird as it was the first time in my 10 years of soccer that I did not congratulate the other team for the game,” Iman said.

As girls soccer faces their first game today, on the side they continue to practice under KHSAA regulations. Up until recently, their training had consisted of maintaining a six-foot distance majority of the time and being limited to doing technical work. As of last week, they were also able to do full contact and recreate game-like situations with scrimmages not being allowed. They are following safety procedures by showing up to practice with a mask, only removing them once they are on the field.

“We just have to stay hopeful in times like this and grateful that we have a season,” Coach David said.
Volleyball
The volleyball team began their season as of yesterday after having significantly less time to practice.

“Usually we have two months of pre-season, but last week was the first week we were allowed to have tryouts and full practices,” Coach Weaver said.

Since all scrimmages for sports have been canceled, JV and Varsity play themselves instead. They are also adapting around other changes COVID-19 has presented, such as wearing masks during practice since they are required in games.

“Concerning corona, there’s not really any aspect that got better or easier, but it motivates us to work harder because we’re all grateful that we got a season,” Megan Bottorff (11, VA) said.