Running with a purpose: ‘Run for Breonna’ Louisville 5k 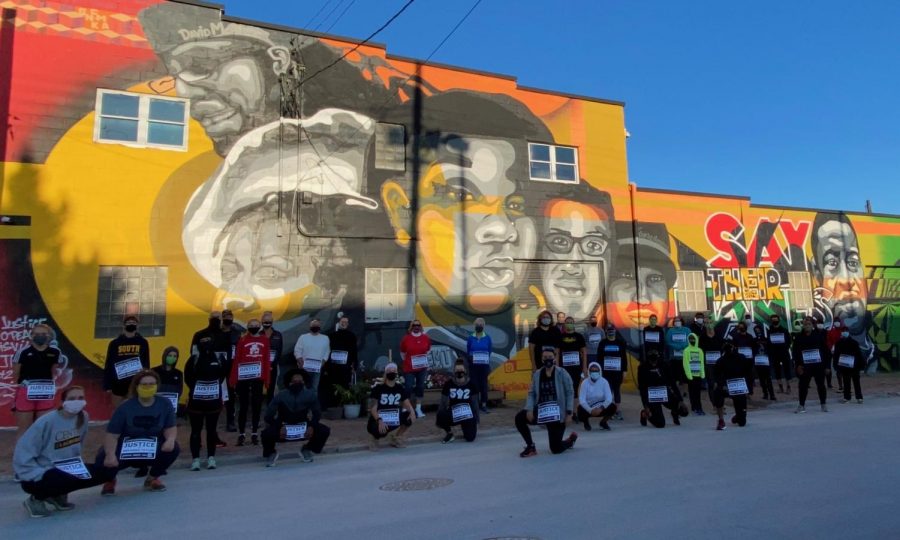 This Saturday morning, a group of runners met downtown on 11th and Main street to continue to raise awareness about Breonna Taylor, a woman killed by police officers in March, with a 5k walk/run.

Called “Run for Breonna”, the event starts promptly at 8 a.m. with the start and finish line next to the memorial mural of Taylor, George Floyd and Ahmaud Arbury.

The 3.1-mile route intentionally takes participants past Louisville locations that relate to Black Lives Matter, including the “Say her name” mural painted on 5th street, a poem about hope by Anne Lamott printed on the side of a building on Main Street and the Breonna Taylor Memorial at Jefferson Park.

Runners and walkers wear large bibs that say “Justice for Breonna Taylor” with a QR code printed on the front that links to resources and ways to help.

After finishing the run/walk participants are encouraged to fill out pre-addressed letters and postcards to Mayor Greg Fischer, Attorney General Daniel Cameron and LMPD Chief Rob Schroeder to demand justice for Taylor.

“Run for Breonna” originated in San Diego after avid runner Nicole Hodges partnered with middle school teacher Gina Wickstead in a challenge to run a 5k every day until Breonna Taylor got justice.

The challenge eventually turned into weekly runs on Saturday mornings and has now spread throughout 14 locations across the country. Stephanie Johnson and Bridget Pitcock began the Louisville chapter back in August and have hosted a run every Saturday since.

Pitcock approached Johnson and asked her to start the event in Louisville, and Johnson recounts that she couldn’t say no in good conscience.

“It’s not a comfort zone of mine to naturally protest,” Johnson said. “But as a lot of the social injustices became more overt and as we saw more in the paper, it was that feeling of inadequacy of wanting to do more…. it’s something that’s not difficult to do and a matter of leaning into positive change.”

Since the 5K began in Louisville, organizers have seen the cause grow to up to 40 participants per week, all from different places and backgrounds.

Citibank Project Manager Janelle Antoine began attending the event after hearing about it from her partner and co-organizer Johnston.

“I’ve sat on the sidelines long enough,” Antoine said. “Sitting around watching what was going on made me think ‘I gotta do something too’ so I came out here for that.”

Civilian Jocelyn Duke is close friends with co-organizer Pitcock and came to put her voice out there.

“For me, it’s being a black woman and really living in fear daily because of so many things we have to be aware of, and to know what happened to Breonna Taylor makes it hurt even more,” Duke said.

Although Duke doesn’t want to be out here fighting for justice, it has been a positive experience for her.

“For me, it’s a safe space,” Duke said. “It’s being a part of something and getting up every morning to be amongst people who understand and get it.”

And The University of Louisville library’s Director of Development Matt Wyatt has been attending for a few weeks with one of his friends.

“You just have to keep the story in the news and keep awareness, and the only way to do that is to show up every week to do your part and to talk about it,” Wyatt said.

The organizers encourage participants to keep coming out on Saturday mornings until justice is served to Breonna Taylor; for them, this includes not only getting the officers involved arrested and charged, but rebuilding the system that let this happen in the first place.

“I don’t want there to be this blanketed immunity based on the badges they wear,” Johnson said. “Without taking a stand against this or changing policies I feel like it’s repeatable. It’s not just about one or two individuals involved in one case.”

The Louisville chapter has sent over 100 letters to government officials and the LMPD, and both Johnson and Pitcock want more people to keep taking action.

“It’s like, when are we going to say enough is enough,” Johnson said. “It’s a matter of us looking in the mirror internally and doing what is sometimes uncomfortable to make a positive change.”