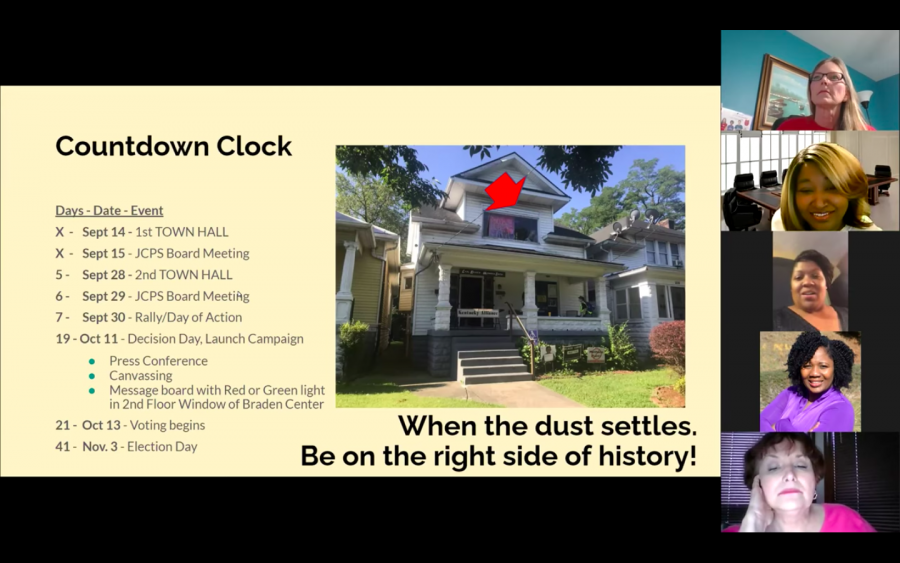 On Thursday, September 24th, a group of members of Coalition for the People’s Agenda (CFTPA), as well as parents and teachers, met with JCPS Superintendent Marty Pollio to voice their agenda.

The CFTPA’s board was initially created in order to connect the ideas of parents and teachers to the county and the schools within after being discredited by members of the Alliance to Reclaim Our Schools (AROS).

Gay Adelmann, the moderator of the meeting and Coalition for the People’s Agenda co-founder, advocated for racial and economic equity. This could include but is not limited to, opening more schools in the west end, being able to have a voice at the meetings held by Alliance to Reclaim our Schools and other specific plans laid out in these slides.

In efforts to rectify this, at the beginning of the meeting Pollio gave a Powerpoint presentation detailing the upcoming plans for JCPS: combating racial inequity, reducing state funding and opportunity gaps and renovating outdated school buildings, specifically those in West Louisville.

“2011, 2013, and 2013 in this district, Donna Hargens and the [JCPS] Board did not take four percent, which you are legally allowed to do…To date it has cost the kids of this district 350 million dollars,” Pollio said. We need to make up for that and we need to be very intentional about how we do it.

Pollio plans to carry out this proposal by increasing the number of black teachers, which now stands at 14%, introducing better resources in low-performing schools and hopefully building three new schools in the West End of Louisville. A tax increase, no greater than a nickel, is where he advocates getting funding for this.

To support his proposal for higher taxes, he referenced the improvements made by Fayette County Public Schools in Lexington, specifically the opening of four new schools, since a 2.1 cent tax increase was approved for the 2015-2016 school year.

“Our resolution is not binding. Each of these things has to be voted on separately by our board, so I don’t want to say that this package has been approved, but this is what we are committed to our funding,” said Pollio.

This means that although he can submit a plan as a whole, each individual aspect of the plan has a different vote.

After his commentary, Adelmann took the floor, addressing the Coalition’s interests and concerns of the resolution process and the lack of voice of grassroots groups in JCPS policy.

“Evolve 502 is a community group that grassroots groups don’t have access to, we are shut out of these conversations [and] the impacted community is not privy to the decisions that are being made in these community group,” Adelmann said

On September 17th 2020, the JCPS board approved a funding plan that increased the funding by 54 million dollars; the resolution decided tomorrow evening is meant to clearly state where the money is meant to go.

Some of the most recent resolutions completed by JCPS were the Safe Haven Resolution in 2017, the Teacher Sickout Resolution in March 2019 amid the teacher pension protests and a Resolution in December 2019 detailing legal action JCPS was taking against e-cigarette manufacturers.

The resolution that will be voted on September 29th is the Resolution Regarding Usage of Anticipated New Revenue.

Adelmann voiced the concerns of the entire coalition when referencing their struggles to keep in contact with the school board, specifically Pollio, when making efforts to be a part of the resolution-making process in the months between early April and late September.

“I did mention to you that we were interested in creating a resolution in support of The People’s Agenda so I was surprised to see a resolution come out since it is one of our demands and it’s been circulated,” Adelmann said. “John Marshall and Corey Shull have been on our calls and are familiar with us requesting the resolution.”

Shull is a member of the JCPS board and Marshall is the Chief Equity Officer for JCPS. Both have attended the Coalition’s meeting in the past.

Pollio confirmed that he knew about their interest in writing a resolution from past references, but did not hear about this demand and the others from the members of the JCPS board.

The resolution that the Coalition created called for an alignment of Black Lives Matter in JCPS, in addition to other community groups, through the implication of anti-racist training for educators involving curriculum and practices, only reopening schools when it is safe regarding the spread of COVID-19 and equitable access to online learning.

Pollio met with the Coalition less than a week from the board meeting, leaving little time to input their suggestions into the Board’s agenda.

“Our goal has been to request that this be introduced and passed [on] September 29th at your next board meeting but we haven’t been able to meet with you we sent a request in August…here we are less than a week away from this board meeting and it’s going to be too late…the community has been trying to get put in your ear and these are not unreasonable demands,” Adelmann said. “…As grassroots groups we have to try harder than groups with power and money and privilege to be heard.”

Throughout the meeting, the CFTPA stated that oftentimes when they request or suggest something to the superintendent, they are promised things by word that are not carried through with. This idea resonated with the concerns they shared over the resolution being presented at tomorrow’s board meeting.

“Some of my concerns about the resolution are that it doesn’t really go into the how and it is not specific about where the money will go,” Adelmann said.

“It would make the community, my community, more comfortable with being more supportive of JCPS if we see that [on paper],” President and Founder of Louisville PTO Latasha Harrison said.

“Their concern was how do we know 18 months from now…there’s a bigger equity issue that we have and we don’t fund that you know…They wanted these major buckets to be identified but still have enough leeway for 18 months and not to pin themselves…This is not one of those things where I get to decide all of it,” Pollio said.

To end the meeting, the Coalition reiterated their desire to be a chance to advocate for the underrepresented, underfunded area of JCPS.

The tax increase will be officially voted on November 3rd and the Coalition does not currently support it.