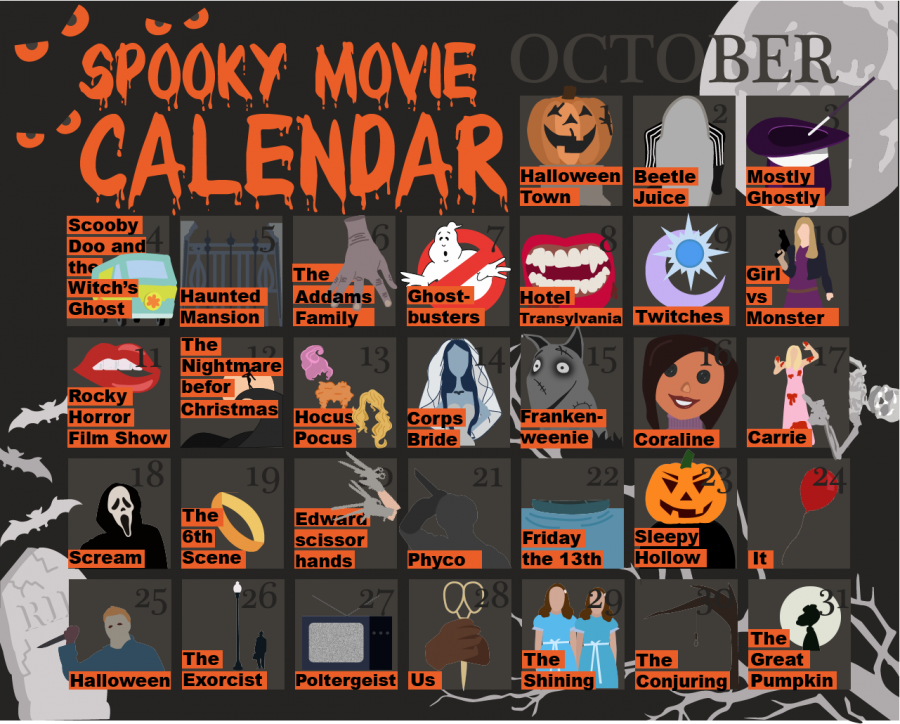 Mya Cummins
Here is a carefully crafted calendar consisting of great spooky-ish, Halloween-ish, creep-ish movies. As the month goes on the movies get spookier. Good luck making it to the end!
1st: Halloween Town Marathon
The movies I chose to start October’s Spooky Movie Calendar are the Halloween Town movies. While I wouldn’t necessarily consider this series spooky, it’s a classic Disney Channel Original that everyone should watch at least twice in their life. I made sure to include the word “marathon” because if you don’t watch all the four movies in one sitting, you’re just not doing it right and probably won’t have the stamina to tackle the rest of the movie calendar.

For the people who haven’t seen Halloween Town (a.k.a have never experienced true cinematic beauty), the story is based around Marnie, a curious thirteen-year-old girl, her two siblings and their grandmother. After their grandmother visits them on Halloween, they decide to follow her home and discover Halloween Town, a place where spooky Halloween creatures live in peace. But something dark is beginning to surface in the town…
2nd: Beetlejuice
When a family moves into a haunted mansion, they seek help from a ghost called Beetlejuice, who loves to crack jokes and cause chaos. Beetlejuice is played by Michael Keaton, who executes the role flawlessly.
3rd: Mostly Ghostly
When Nicky and Tara come home from a walk to find a whole new family living in their house, they come to the sudden realization that they’ve turned into ghosts. The only person that can see them is Max, a teenager who aspires to become a magician and just like in any classic 2000’s movie, wants his crush to notice him. This dynamic trio takes on the school talent show, while also single-handedly preventing evil spirits from taking over the world.
4th: Scooby-Doo! and the Witch’s Ghost
The Gang ( a group of meddling kids and their talking dog) gets invited to a fall festival by a famous horror writer. Once at the festival, they find that the town seems to be haunted by a witch. Not to mention The Hex Girls perform a musical number that will be stuck in your head for a week.
5th: The Haunted Mansion
The Haunted Mansion is hilarious. You should especially watch it if you ever plan on going to Disney World and going on the Haunted Mansion ride. The movie is very funny and heartfelt, I would definitely recommend it for a family movie night.