OPINION: Trump’s careless remarks will cost us the rest of the semester

Trump's message to the public about his contact with the coronavirus and how it will affect JCPS. 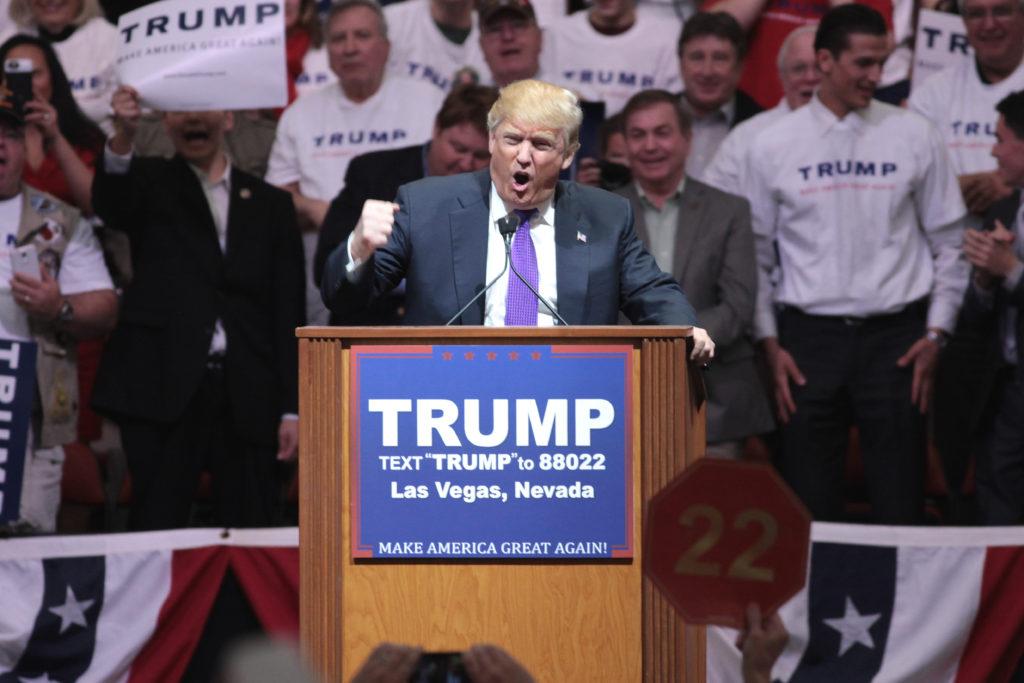 Donald Trump addresses an audience at one of his campaign rallies in Las Vegas, Nev. “Donald Trump” by Gage Skidmore is licensed under CC BY-SA 2.0.

At this point, we will never return to school.

I’ll admit I initially had hope when Dr. Marty Pollio initially announced that he advised that all of JCPS would have the opportunity to return to school by November 2nd, but two crucial things have happened since then.

First, Breonna Taylor protests erupted in Louisville in reaction to the grand jury decision in her case. Second, President Trump got COVID-19 and then advised the entire nation that it was nothing to be afraid of.

Seeing as the United States is fast approaching 210,000 COVID related deaths, I think that we should all be afraid. When President Trump released his positive COVID test results, America went into a frenzy and his press team took this opportunity to do exactly what they should’ve done: paint him as a martyr who could take on anything and come out unscathed. An invincible man. A superhero really.

The released pictures of him working at Walter Reed National MilitaryMedical Center, although apparently staged, painted the image of a leader at work despite the circumstance, putting his work first. The visit to his supporters, although now putting the two secret service agents riding in his vehicle at risk, demonstrated a positive performance in light of combatting a virus that could potentially result in death.

The photos released by the WH tonight of the president working at Walter Reed were taken 10 minutes apart at 5:25:59 pm and 5:35:40 pm ET Saturday, according to the EXIF data embedded in both @AP wire postings that were shared by the White House this evening. pic.twitter.com/EzeqIkGdf7

I will be leaving the great Walter Reed Medical Center today at 6:30 P.M. Feeling really good! Don’t be afraid of Covid. Don’t let it dominate your life. We have developed, under the Trump Administration, some really great drugs & knowledge. I feel better than I did 20 years ago!

President Trump claimed to not be afraid of the virus based on his own experience. Let’s explore what his experience included.

On Friday after receiving a single 8 gram dose of Regeneron’s polyclonal antibody cocktail and supplemental oxygen at the White House, Trump flew by Marine 1 to Walter Reed National Military Medical Center in Bethesda, Maryland Unless you are an active or inactive member of any branch of the military, you will not be receiving treatment at  Walter Reed, and you will definitely not be staying in a six-room presidential suite with a crystal chandelier hanging from the ceiling.

U.S president Trump isn’t staying in any old hospital room. Walter Reed Hospital has a six-room presidential suite just for the commander in chief that includes an intensive care unit, a kitchen, a living room, a bedroom, & a dining room with a crystal chandelier. pic.twitter.com/QQVhFYjzLJ

For instance, based on Medicare Part B, “Medicare will help pay for oxygen equipment, contents and supplies for the delivery of oxygen when all of these conditions are met: Your doctor says you have a severe lung disease or you’re not getting enough oxygen, your health might improve with oxygen therapy, your arterial blood gas level falls within a certain range, other alternative measures have failed.”

As Trump is set to leave Walter Reed at 6:30 PM this evening, this means that he only remained in the hospital for four days, while many men in the age group of 65 and above, did not return home at all. While President Trump does indeed speak from experience, it is one that no one else will share.

So, I encourage you not to listen to his exclusive advice. If you would like to return to school before next year, we are going to have to turn this around and that means doing your best to take all the precaution necessary, follow CDC Guidelines instead of disregarding them, and encourage your family and friends to do the same. If the President of the United States was able to contract the coronavirus, this means that we should all be afraid as all this displays is our own vulnerability.

Unfortunately, people will listen and feel that masks are not necessary, that social distancing is nonessential and the same goes for washing their hands. These thoughts fueled by our nation’s leader have claimed that the coronavirus is not at the level to “dominate” anyone’s life, let alone take it from them.

Now, how does this relate to JCPS?

In September, Dr. Pollio claimed that “without a doubt, those cases per 100,000 [are] going to have to decline where we feel safe to bring back all of our staff and students.”

In light of this recent event, I see us moving only in the opposite direction.