OPINION: Write your essays and drafts in Comic Sans 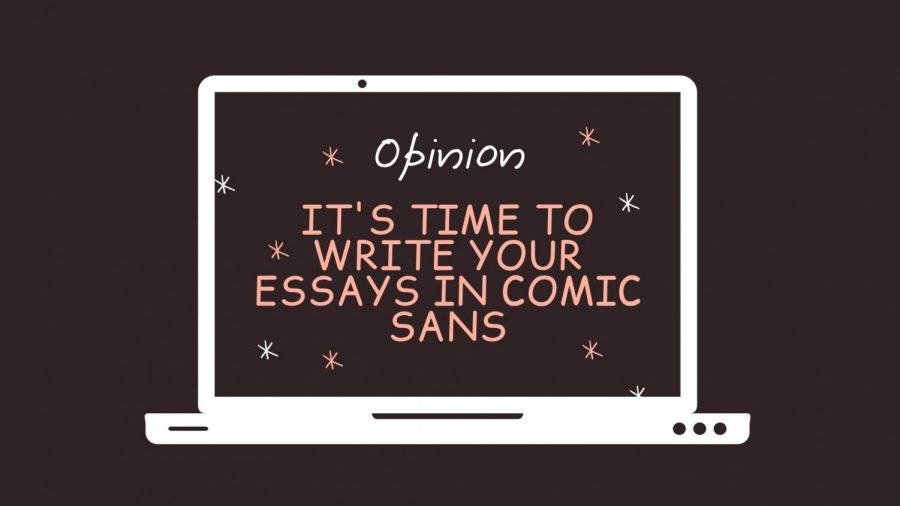 It's time to write your essays in comic sans. Graphic by EP Presnell.

Comic Sans—it’s a font we all know and love, or love to make fun of.

You might recognize the font from elementary school, as it’s one teachers love to use. You may also recognize the look and name from 2015’s “Undertale,” where one of the skeleton brothers was named Sans and all of his dialogue was written in, you guessed it, comic sans. But why are you reading about this font? What use could it possibly have to a high schooler?

I believe that from here on out, you should write your papers in Comic Sans.

A couple of years ago, if you told me to do this I would probably have cringed and shut you down immediately, but I promise this trick works. Have you ever had to write an essay that’s due in an hour that you completely forgot about, but find yourself unable to come up with anything good? Have you ever faced severe writer’s block and it stops you from being productive? Comic Sans is going to be your best friend from here on out.
Where the idea comes from
One day, about two years ago, I saw a Tumblr post from a college student that said writing in Comic Sans made them work faster and get more done than they had before. I laughed it off, but the idea stuck with me and I tried it a couple of weeks later. When I tell you it changed my world, I mean it.

Writing in Comic Sans for drafts is pretty common and even recommended by people across the internet. Full-time writers have taken to the test and found that yes, comic sans helps you write faster and better than you would otherwise.
How does that make sense?
Comic Sans is a funny, not serious at all, font. Why would it help you in writing essays?

It appears that because comic sans is such a childish, relaxed font, that it takes away this pretentious mindset that comes with writing an essay. Dolores Toner said it best in her article when she wrote about her experience writing in Comic Sans.

“Seeing one’s own work stripped of pretension down to its most basic level, language wearing children’s clothes, is a powerful thing. By the second or third day of writing in Comic Sans, I found myself feeling freer than ever to make silly mistakes, take risks, and explore stranger territories,” Toner said.

When you take down the idea that your writing has to be perfect, writers are able to overcome a mental block they create, which allows for quicker writing. Intimidating fonts like Times New Roman or Cambria can make you feel your work is less worthy, causing counterproductive tendencies which may make writing an essay difficult and thus a longer process.

Another fun little fact is that Comic Sans is actually a dyslexic friendly font since almost every character is a unique one, rather than other fonts which use characters but flipped. For example, ps and qs are normally the same character but flipped, which makes it harder for dyslexic readers to differentiate between them.
Why should I write my essays in Comic Sans?
Instead of continuously bragging about Comic Sans, let me return to why I’m talking about it in the first place. While we’re stuck at home and we’re expected to do work in perhaps some of our must unproductive states, it’s nice to have tricks that help us get our work done quicker. And I believe that writing in Comic Sans before turning in an essay is the way to go.

Writing in comic sans is easier on your brain, through breaking down the words and making your writing feel fitter, which allows for more productive work to be produced. For seniors, this includes college essay writing and AP/dual credit course writings. For underclassmen, this includes rigorous courses which include AP and duel credit as well.

The truth is, we’re all going through a hard time right now. It sometimes feels like the world is falling around us, and we just want anything that will make our lives a little easier. Although it seems crazy or perhaps even dumb, write your next paper’s draft in Comic Sans and see if it helps you out. You might end up writing more and even better than you could imagine.

(Oh, and if you couldn’t guess, I wrote this whole thing in Comic Sans in about an hour with all the research included!)