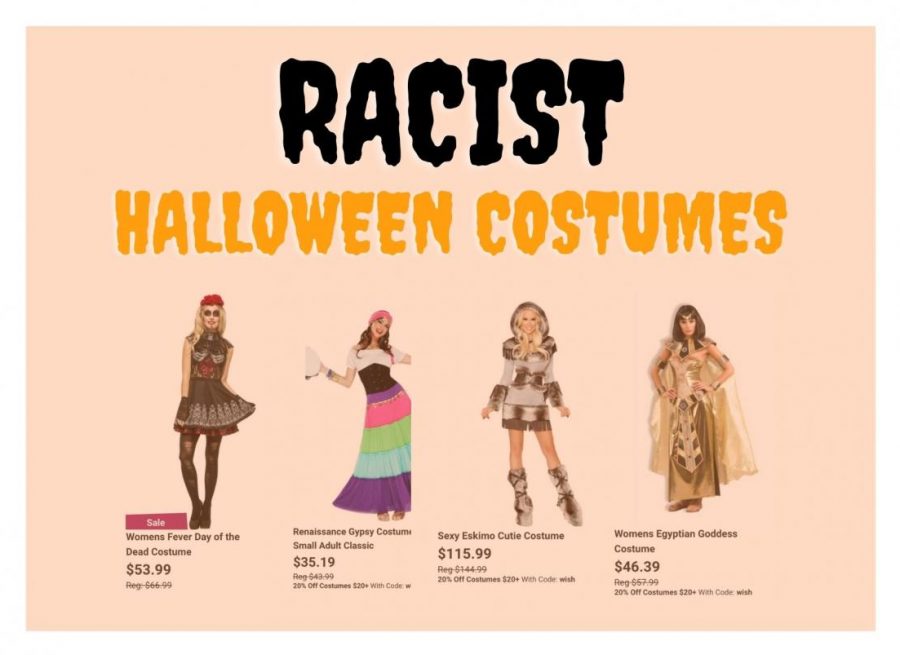 As you choose costumes for what I hope are virtual Halloween celebrations, please keep in mind the background of the character you are trying to portray. While masks may be a staple part of your costume, they may blind you from the concept of being culturally aware. Here are four common costumes that are inherently racist.
Gypsy Costumes
The term “gypsy” is in itself a derogatory term and came about when the Roma people traveled from India and were mistaken for Egyptians. This label became a slur that was used throughout their oppression in 15th century Germany, Italy, Spain and parts of eastern Europe. The typical gypsy costume of gold jewelry, flowy skirts and colorful headwraps only helps to portray the stereotypes that led to their persecution. Wearing the costume today is another way to continue the discrimination against the Roma people.
Eskimo Costumes
The term “eskimo” is a derogatory term for the Inuit people who inhabit the arctic regions of Alaska, Greenland and Canada. While there are many theories that try to pinpoint where exactly the word was derived from, none have a positive connotation. Some of these theories include that the word “eskimo” comes from the latin word “excommunicati” eliciting the fact that many Inuit people were excommunicated because they were not Christian. Another theory was that the term was created by non-native colonizers and means “eater of raw meat”, thus creating a barbaric image of the Inuit culture. The eskimo costume, with the furry hood and snow shoes, replicates traditional Inuit attire, as they wear anorak woods with fur trim and snow shoes for warmth (rather than a piece of entertainment). Wearing this costume only solidifies the discrimination against the Inuit culture.
Sugar Skull Dia De Muertos Costumes
Before you think about being a sugar skull, please keep this in mind. The sugar skull face, consisting of white face makeup with colored pattern, is a type of calavera that stems from a tradition where Dia de Los Muertos participants place sugar skulls on the graves of their deceased loved ones to honor their memory. Wearing this as a costume is a sign of disrespect to the Mexican culture, as this is one of their most important traditions and pictures sugar skulls as a form of entertainment, rather than a deeply regarded, emotional tradition.
Egyptian God/Goddess Costumes
While many Egyptian goddesses and gods are portrayed as women and men with fair skin, they really originate from one of the most well-known African civilizations. Even in ancient Egyptian healing texts, Isis claims that she is, “ the Nubian and I have descended from heaven.” Nubia is a region along the Nile River located in northeastern Africa (specifically, upper Egypt). In Egypt, colors were symbolic and many Egyptians were drawn with bright yellow or golden skin to symbolize purity of the divine; therefore, I can see why there may be some confusion as to what they correctly looked like. If you didn’t do your research and only see these types of images to describe Egyptian gods or goddesses, it is fair to say, especially if you don’t know your geography, that you had no idea that they were African. However, those who dress up to portray these gods and goddesses with fair skin are only contributing to society’s false beliefs and solidifying the stereotype that all Egyptians are fair-skinned.

While Halloween is a popular holiday that many look forward to every year, it’s important to be mindful of the image and messages that you are really creating on October 31st. Before you choose a costume, do your research.